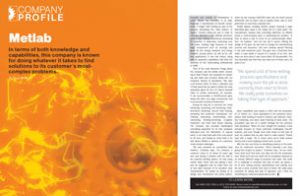 Founded just outside of Philadelphia in 1928, Metlab has innovation in its DNA. Originally a manufacturer of aircraft components, it began heat treating as part of the process, developing the “drop bottom” or “gantry” furnace along the way in order to minimize distortion in the delicate aluminum parts it was making. It continued developing its expertise in deep-case carburizing over the years, building huge furnaces to treat large components such as bearings and gears for the mining, industrial, and energy markets, among others, as well as for military applications. It was this history, along with its expansive capabilities, that drew the attention of two heat-treating professionals in 1998.

“One of the most attractive things about the company was the facility itself,” according to Mark Podob, vice president of marketing and sales and co-owner along with Jim Conybear, director of operations. “We have a pit furnace that’s 15 feet in diameter and 13 feet deep that we used to nitride the main propulsion gears for the U.S. Navy’s Seawolf class of nuclear submarines, for example. It can accommodate a 43,000-pound gear, along with other very large components, and it can provide a variety of treatments.”

Among its long list or services are metal hardening, quenching, and tempering, induction/flame hardening, vacuum heat treating, annealing and protective atmosphere normalizing, carburizing, carbonitriding, nitrocarburizing, boriding/boronzing, cryogenic treatment, and heat treat stress relieving. The company also provides metallurgical consulting—supported by its fully equipped laboratory—and the fabrication of special parts. It can heat treat parts from one pound to 25 tons, and having so many tools in its belt allows Metlab to address its customers most-complex challenges.

“We view ourselves as consultative heat treaters,” Conybear says. “For instance, a customer came to us about 10 years ago who was having a problem with the rails in his material handling system. He was using carbon steel, which was only lasting a year, and we suggested that he make them out of tool steel because of its excellent wear characteristics. He ended up asking us to design and manufacture the whole system, which we did, turning a $20,000 order into one worth around $300,000. But he hasn’t had to replace those rails or even grind them in more than a decade now.”

Podob agrees, recalling another project involving a large fabricated gear used in the rolling mill of a steel plant. The manufacturer needed help controlling distortion, so Metlab joined a multi-company team in addressing the problem. “It took us about a year to arrive at our lowest-possible distortion,” he explains, “and not only did it require refining the design of the gear, we also had to change the manufacturing process and sequence, and even develop special fixturing in the heat treatment cycle. This gear had a three-foot face width, a case depth in excess of a quarter of an inch, and when we were done it was round within 30 thousandths. The only downside was that they only need one of those every 10 years or so.”

More capabilities were added in 2001 with the acquisition of J.V. Potero, Inc., which specialized in the protective atmosphere heat treating of small to medium size batches, induction hardening, and black oxide finishing of steel parts. The acquisition was part of a careful strategy the two partners have developed. “When Jim and I bought the company, it was primarily focused on these extremely challenging ‘one-off’ projects, and even though we’re both drawn to that type of work we realized that we also need to make payroll,” Podob says with a laugh. “So in recent years we’ve really worked hard to pull in some ongoing contract work, as well.”

Still, the two men thrive on identifying solutions to the problems its customers encounter. “We’re basically a job shop going from project to project,” Conybear says, “so you never know what you’ll find when you step out into the production area. What you’ll see one week will be completely replaced by an entirely different range of products next week. And while it’s a challenge to schedule that type of work, we spend a lot of time writing process specifications and making sure the job is done correctly from start to finish. We really pride ourselves on taking that type of approach, and I think it’s something our customers appreciate as well.”