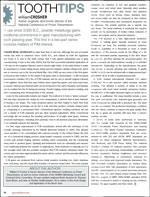 Powder metal technology is older than that of cast iron. Although the use of powder metals has been in existence since 3,000 B.C., and utilized by both the Egyptians and Incas, it is only in the 20th century that it has gained widespread use in gear manufacturing. It was in the early 1900s that the first successful industrial application of P/M was for the tungsten filament used in electric light bulbs. In the early thirties it made its appearance in metal cutting shops, being used for tungsten carbide cutting tools, and it was in common use in the Second World War. Circa 1960 we see some of the first gears produced by this method.
In the sixties P/M gears were in automobiles—a GM six-speed transmission contains 26.1 lbs of P/M material, and its use in aircraft engines followed in the eighties. Since that time spur, helical, bevel, spiral face gears, and racks have been produced. Internal and external teeth can be produced in the same ring gear, and keyways can be molded into the ID during processing. Powder forging, metal injection molding, and warm compacting were developments in the nineties

Gears for the automobile industry are forged. The method is to form a “green compact” that has been pressed into shape at room temperature, a preform that is then sintered, producing a net shape. The mass produced pieces are then forged to reach their final density. Isostatic pressings can be hot or cold, and they produce complex shaped parts by compacting in a pressurized fluid. Conventional injection molding machines are fed with a variety of P/M materials and any other required ingredients. While conventional technology did not produce the bending performance of wrought steel gears, however, advanced techniques—including shot peening—has to all practical purposes eliminated, if not markedly reduced, the disparity.

The first major improvement in P/M manufacture arrived with the technique of hot isostatic pressing, introduced by the Batelle Memorial Institute in 1960. This allowed metal powders to be consolidated with reduced porosity. In the United States the first use of a commercial forging process using heated compacts occurred in 1965, and the nineties saw powder forging, injection molding, warm compacting, and die compacting being used to produce gears. Spraying and treatments such as carburizing and vacuum sinter hardening widened the number of applications. Heat treatment is basically as it is with wrought steel, with the possible exception that P/M material carburizes faster. The surface and core have approximately the same carbon content, and the porosity influences the carbon penetration.

P/M gears are produced from various metal powders including iron, steel, stainless steel, and brass, and the usual alloy includes 2-4 percent nickel/silver. The most popular materials are mixtures of iron and graphite powders, copper, steel, and nickel steel. Specialty steel powders include phosphorous iron, alloy steels, and stainless steels. Alloys such as bronze, brass, stainless steel, and nickel-cobalt can also be produced by this method. Excellent microstructures and mechanical properties can be obtained. The powder particles are a specific size and shape. The usual methods of producing the required powder are by atomization of molten metal, reduction of oxides, electrolysis, and by chemical reduction.

The P/M process is a fast, high-volume production method of making gears typically produced at many thousands per hour. The probable economic minimum would be quantities of a thousand or more. A simple description of the process would be the filling of a die with the lubricated powder, squeezing to the die’s shape by a punch, and then ejecting the processed gears. The green compacts are batch-sintered, usually in a controlled atmosphere. Depending on the specifications, the gears may require a second pressing and sintering. A quality AGMA Q6 (A11) can be achieved with a single-pressed part, and AGMA Q8 (A 9) with a double-pressed part.

In 1985 Gorham International obtained U.S. patent 4,591,482 for a new process called pressure assisted sintering. This allowed a number of alloys to be fully compacted with much lower isostatic pressures. Surface densification of the highly stressed region is carried out so the core is unaffected. The many benefits include a pore-free case and porous core, improved gear geometry, and close tolerances by rolling with a precision die. The teeth can also be crowned. The production techniques, combined with new alloys, continue to improve the gear quality. Near fully dense gears are possible with less than 1 percent residual porosity.

A series of tests were performed in Germany, with the results fully reported at the ASME/AGMA 2003 International Power Transmission and Gearing Conference. The Metal Powder Industries Federation and ANSI/AGMA produce standards that are cross-referenced with ISO and ASTM. MPIF standards are divided into three categories: Material Specifications, Test Methods, and P/M Press Safety. The material standard contains 11 material systems.
Also provided is information on machining, hardenability, coefficient of thermal expansion, fracture toughness, and corrosion resistance. Machining is sometimes required for drilling cross holes and improved inside diameters. The Test Standard contains information on surface finish measurement (Std. 58), preparation of test specimens (Std.60), determination of oil content and interconnected porosity (Std. 57), and Charpy Impact Energy (Std. 59). With the support of MPIF, ANSI/AGMA standard 6008-A98 was produced to assist in clearing up any confusion between the gear supplier and their client. 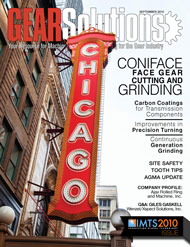