With nearly 130 years of experience, Horsburgh & Scott has remained a strong gear manufacturer during many economic swings by focusing on high-quality materials, advanced engineering principles, and manufacturing to the highest standards. The company has recently received prestigious recognition due to its long-term success, innovation, and partnerships within the gear industry.

At the recent American Gear Manufacturers Association (AGMA) Annual Meeting, Horsburgh & Scott was presented an award and inducted into the newly created AGMA Hall of Fame for being one of 12 companies out of the 19 AGMA founding members that still remain in the industry today. Horsburgh & Scott was also recently awarded the Century Cup from Gleason Corporation and honorably recognized as a loyal customer of Gleason’s gear manufacturing equipment for more than 100 years. As the industry recognizes Horsburgh & Scott for its monumental achievements, the company is building on its success from the past 130 years and plans to continue to grow as a worldwide leader in gear manufacturing. 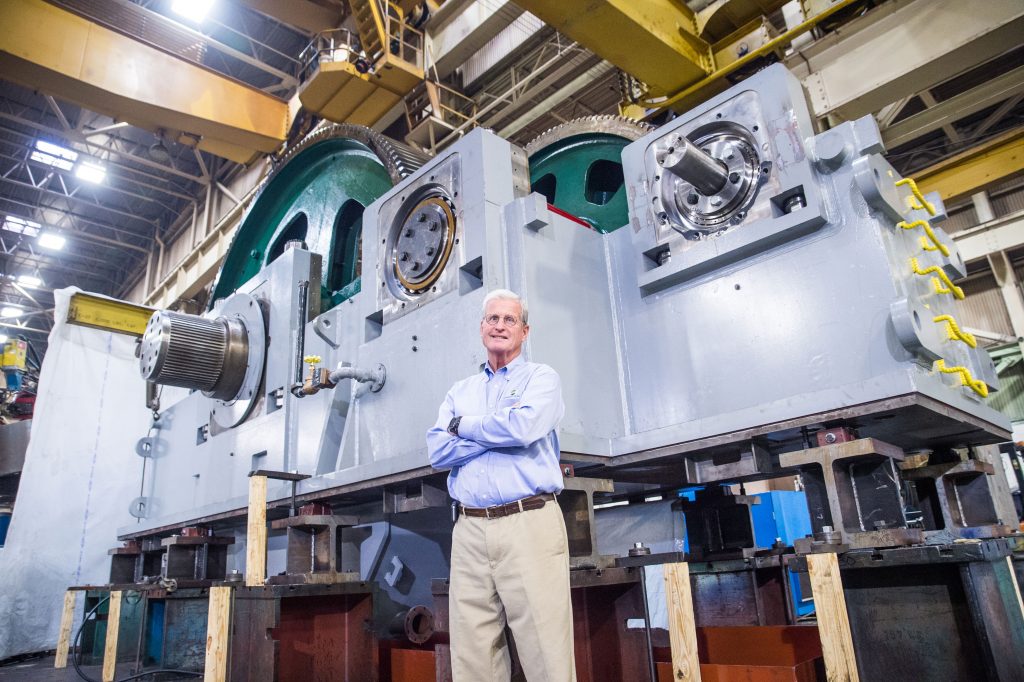 The company’s story began with Frank Horsburgh, who was born in 1854 in Scotland and came to the United States in 1882 after working a machine shop apprenticeship. In 1886, Horsburgh and another millwright, Thomas Scott, formed a partnership and opened a machine shop in Cleveland, Ohio. The majority of their work was done for the local streetcar company, manufacturing wire trolley switchovers and wire connectors. Soon, they bought their first gear equipment to make spur gears and axle pinions for electric streetcar drives. In 1889, the partnership with Scott was dissolved, but Horsburgh forged ahead on his own and formally incorporated the business as the Horsburgh & Scott Company in 1903. Then, the shop was moved to a 6,000-square-foot building in its present location. Two more buildings were added later to house various types of gear cutters, including the company’s first Sykes herringbone gear generator in 1927. Seeing a need for enclosed gear drives, the company then built its first speed reducer (a worm gear drive). Spur, helical, and herringbone units were added to the product line thereafter. 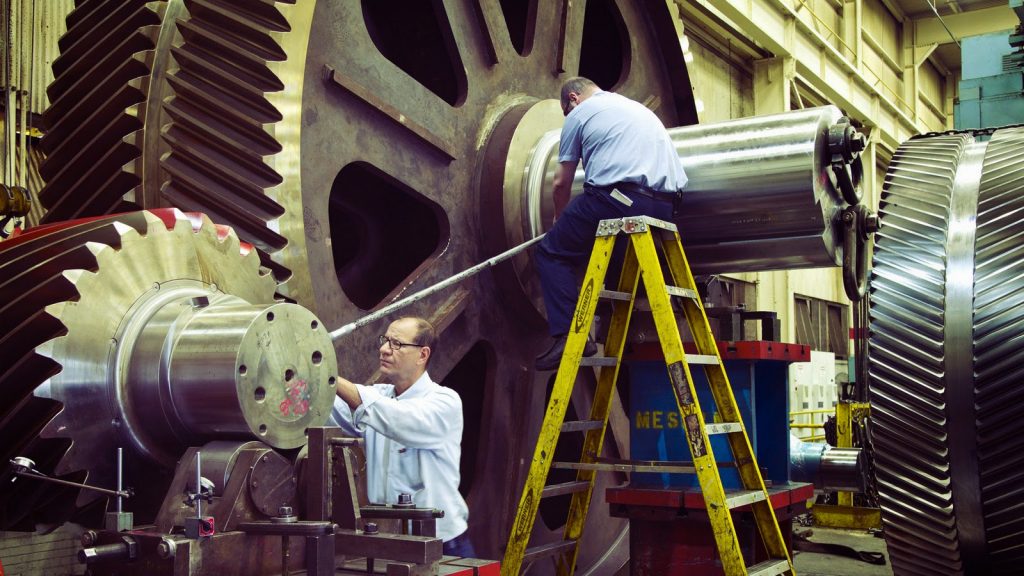 Frank Horsburgh remained with the company until his death in 1933 at age 79. His sons, Robert and Thomas, guided Horsburgh & Scott through the Great Depression of the 1930s and through war times in the 1940s. Robert’s three sons, Chuck, Don, and Ken, joined the company at this time when the primary product focus was on gearing for the steel industry. With the end of World War II came new demands for gearing to support America’s capital expansion, thus Horsburgh & Scott began to grow at an unprecedented rate and experienced controlled growth over the next 25 years. More buildings were added to house new machine tools, engineering became more advanced, and new products were introduced to serve new markets. In 1973, Ken’s son, Christopher, joined the company, followed by Ken Jr. in 1982, becoming the fourth generation of Horsburgh & Scott management. 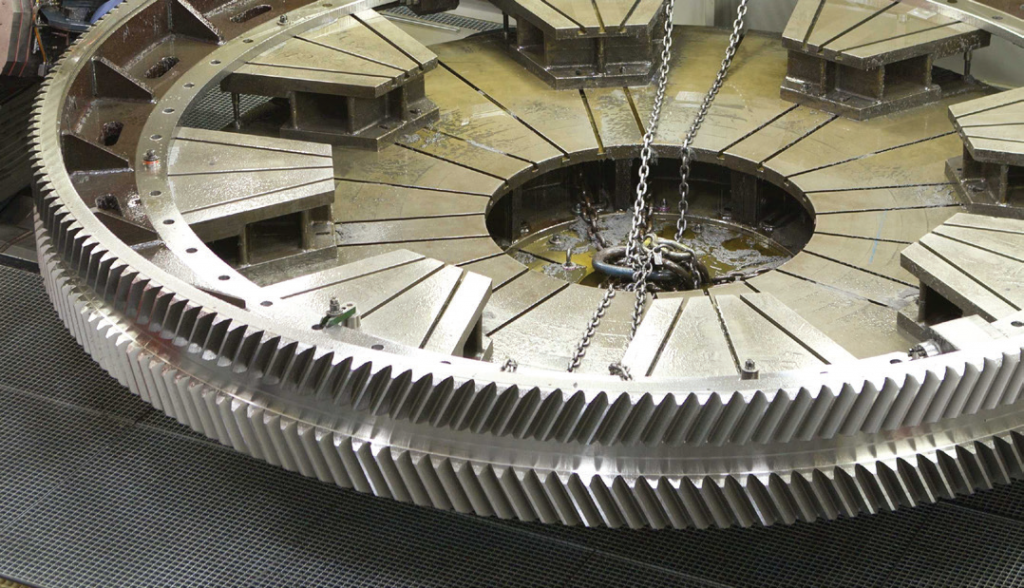 Today, the company is an industry leader with an international geographic reach and four manufacturing facilities in North America (three in the U.S. and one in Canada) totaling more than 400,000 square feet of manufacturing space. Its headquarters in Cleveland, Ohio, is a single building that covers one entire square block. The company serves the steel, aluminum, mining, cement, oil and gas, tire and rubber, sugar, rail, wind energy, pumps, power generation, infrastructure, and industrial equipment industries.

“Horsburgh & Scott is truly unique in its ability to provide new and repaired gearing products for a wide range of markets,” said President and CEO Pradeep Saha, who previously served as the company’s vice president of sales and marketing. “We have turnkey engineering design and manufacturing expertise to produce large open gearing up to 40 feet in diameter and large high-torque gearboxes over 60,000 horsepower. With our in-house engineering, manufacturing, heat treating, and repair and rebuild facilities, plus nearly 130 years of experience, we are well-positioned to increase market share and gain new customers around the world.” 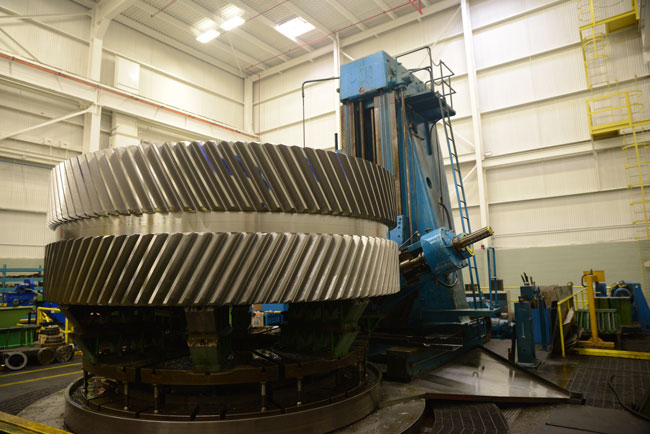 Horsburgh & Scott recently built the largest replacement gearbox they have ever manufactured. The unit is a gigantic reduction stand #2 (R2) steel rolling mill gearbox manufactured to replace a 30-year-old unit for a large steel customer in Ohio. The original version was created in the 1970s and had exceeded its lifespan of around 30 years. As steel materials have become stronger through the years for industries such as automotive production, the capacity of the steel mill rolling gearboxes have increased to accommodate the necessary high pressure and torque needed for manufacturing. The new R2 gearbox weighs 366,000 pounds and produces 24,700,000 in.-lbs.-f. of output torque.

“We applied modern gearing technology created in the last few years to engineer this unit with increased torque and improved quality gearing,” said Chris Horsburgh, who was the lead on this project. “The new AGMA quality standard of this R2 gearbox is 12 and 13, compared to the old gearing AGMA quality of 8. This new gearbox will have a significantly longer life, higher efficiency, better tooth contact, and much longer service in the field.” 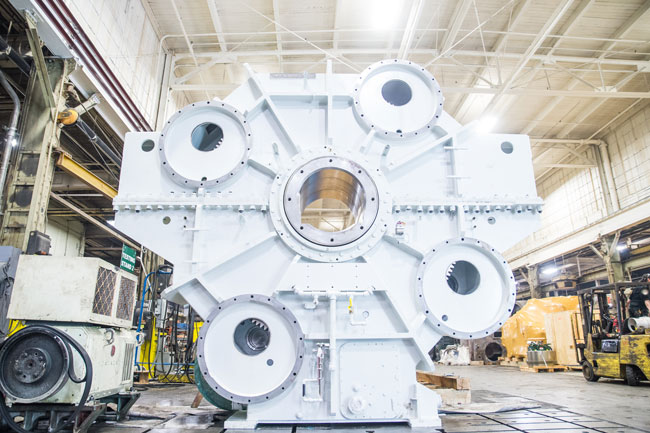 The company is also proud of another recent substantial accomplishment — an innovative repair of a large Pennsylvania steel customer’s BOF gearbox that was initially thought to need a complete replacement. The steel mill had gearbox failure on a large BOF drive that became frozen due to rust, corrosion, heat, and 25 years of heavy use. Production at the mill was shut down four days while staff worked on the drive to remove the unit from the shaft. After freeing the BOF drive, the steel company contacted Horsburgh & Scott to assess the gearbox, even though the housing seemed unrepairable. Horsburgh & Scott engineers were able to come up with an initial repair plan, and the entire unit was shipped to the company’s repair and rebuild facility, where it received a complete overhaul with new ground gears, shaft, and a seamless patch in the casting. The customer was so pleased with Horsburgh & Scott’s ability to repair the drive and the quality of the work, that they are sending a second BOF drive for a similar complete rebuild.

“We have recently repaired or built new eight large BOF steel drives and completed their complicated service and installation,” said Horsburgh. “The precise job of fitting the large keys in the bore of these drives is a unique skill that Horsburgh & Scott has become very good at.” 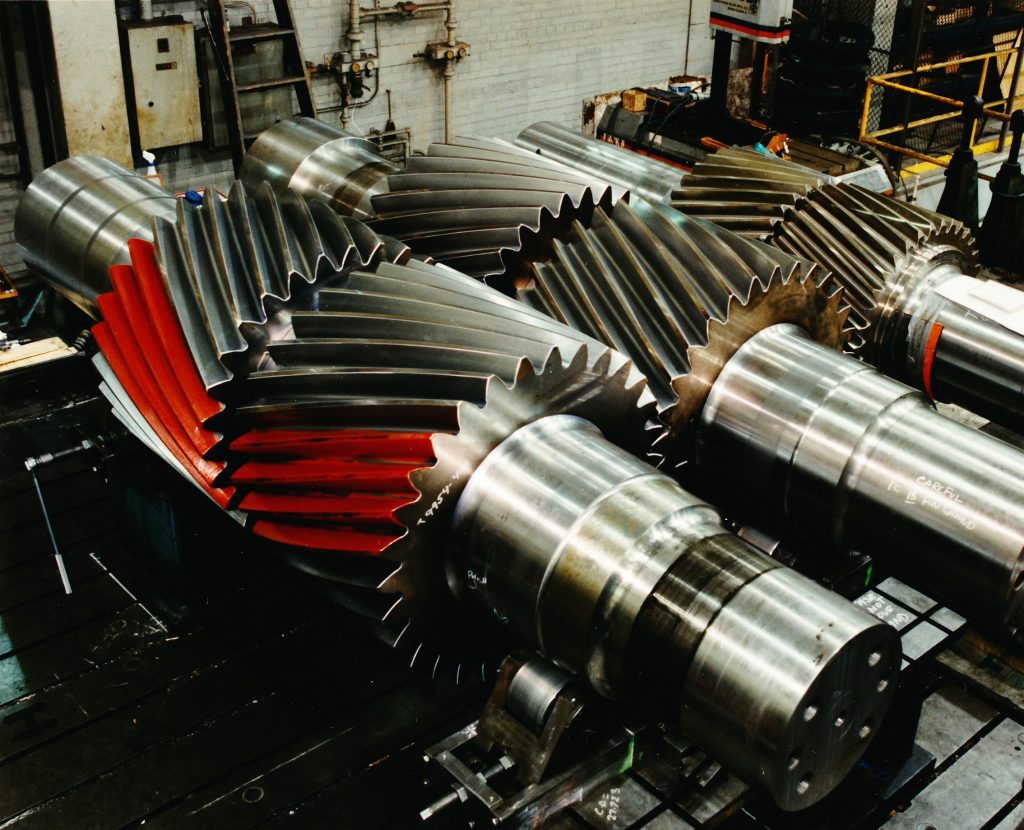 In addition to substantial rebuilds and repairs, the company offers a complete gear product line including large spur gears, helical gears, double helical gears, herringbone gears, ring gears, internal gears, pinion gears, shafts, and re-shelling. The company’s high-tech gear-cutting equipment will grind to AGMA 14 and quality inspection measurements are available to within 2 microns. Horsburgh & Scott also has in-house heat treating and carburizing up to 50,000 pounds and induction hardening up to 5 meters in diameter and 30,000 pounds.

For the future, Horsburgh & Scott will continue to invest in its people, offering an extensive in-house employee training program, and in its manufacturing quality to remain a leader in gear manufacturing solutions.

“We are fully committed to providing the most advanced engineering solutions for our customers, whether it’s a new or rebuilt solution,” said Saha. “We will continue to expand globally as we now have experienced field service engineers strategically located around the world.”