Entrepreneurs are hardwired to detect opportunity, and that certainly describes James Manning, president of STD Precision Gear & Instrument, who’s taken a company launched in his cellar to one that’s supplied gears currently in use aboard the International Space Station. It all started in 1984, he says, with an interesting phone call from his accountant.

“This was the guy who handled my personal taxes,” he says, “and one day he told me he’d bought a company that made valves used to control natural gas. He said an old Barber Colman 610 gear hobbing machine had come with the deal, but not the people who knew how to run it. I did, though, because I’d been involved in gear manufacturing ever since I’d graduated from Boston Technical High School in 1978, so I told him I’d cut the gears he needed for the valves if he’d give me the machine, which he did.”

Manning spent two years cutting gears in his basement before deciding the business was viable enough to be incorporated, which he did in 1986. While he picked up work wherever he could in the early days, he knew from the start that he wanted to specialize in precision gearing, setting his sights on the aircraft, aerospace, and medical instrument markets. One way to begin branching out and developing a reputation was to bid on government contracts, which he began to accumulate. “The thing with those types of contracts, though, is that sometimes the winner is someone who either made a mistake working up their estimate or was so hungry their bid was way too low. Both of those situations describe me back then,” he says with a laugh, “but I had to learn quickly, or I knew we wouldn’t stay in business.”

Rather than low-balling quotes, or seeking “high-quantity, low-quality” work, Manning began focusing on the upper echelon of gear clients. From the beginning he’d plowed profits right back into the company, purchasing new machines at the leading edge of equipment design. While this had to do with the high standards he was aiming for in terms of the gears he was manufacturing, it also had to do with appearances. “I knew that when you’re courting the top aerospace companies, you needed to have the latest technologies on the floor in case they requested a tour or wanted a list of your equipment,” he says. “But I also wanted to go ahead and set a high standard for the way we do business from the very beginning.”

This approach has proven successful—current programs include the Global Hawk drone for the U.S. Air Force, Harpoon missiles, the Boeing 787 Dreamliner, the Hubble Space Telescope, and the aforementioned International Space Station—and the company has expanded its capabilities dramatically over the years. Today they include CNC turning, milling, wire EDM, and Swiss screw machining, in addition to gear hobbing, shaping, and shaving. Other services are internal and external cylindrical grinding, surface grinding, ID honing and grinding, precision deburring, and isotropic superfinishing. STD also manufactures its own blanks, as well as designing and making its own workholding devices, and its testing, measuring, and gear inspection equipment is both extensive and state of the art.

The gears it manufactures—up to AGMA Q14—run the entire gamut, from spur, helical, bevel, worm, cluster, clutch, face, and planetary gears to splines, shafts, and gearboxes, among many others. And its in-house heat-treating service is bolstered by its recent Nadcap accreditation in Heat Treatment & Passivation. “We are also AS9100 & ISO 9001 registered,” Manning says, “and we’ll soon be accredited for Nadcap EDM as well.”

In less than three decades STD has evolved from the cellar to the stars, with other products found in medical devices such as blood centrifuges and surgical instruments. Manning says he’s extremely proud of what he and his colleagues have achieved, and that he looks forward to where future projects will lead. “I’ve always wanted to be as versatile as possible so that we can take advantage of opportunities that make sense for us,” he says. “We’ve worked hard over the years to position ourselves as a proven leader in manufacturing high-precision, complexly-configured, tightly-toleranced gears, splines, and other mechanical transmission components, and that’s a reputation we work every day to maintain.” 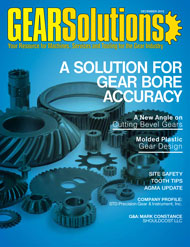