The gear industry has been slowly changing over the last 10 years, and Excel Gear has worked hard to change with it, offering ground tooth gearing as well as working with complex military projects.

“We hob gears up to two meters in diameter, and we tooth grind to a meter and half,” said Dan Herr, operations manager with Excel Gear. “But, our business has changed of late. We’ve gotten into a lot more military aircraft prototyping, Navy ship propulsion, and the AGS gun system.”

Some of the equipment in Excel Gear’s arsenal includes a Liebherr LCS 1200 and a Hofler Rapid 1500.

Excel Gear was started in 1991 by founder and President N.K. Chinnusamy when it began life as an engineering firm. But the company has been expanding ever since, especially with the military lately.

In particular, Excel has done work on the AGS gun system for the Navy’s Zumwalt Class destroyers, as well as its future weapons replacement.

The AGS or Advanced Gun Systems is a naval artillery system that provides long-range Naval gunfire support against shore-based targets.

“The AGS gearboxes were all designed and analyzed by Excel Gear,” Chinnusamy said. “The design is very complicated. The analysis was also done by Excel Gear, and we developed the whole concept. That in itself was a great achievement for a small company like ours.”

At the time, Herr said Excel was supposed to provide 24 of the AGS systems, but eventually only produced three for the Navy before the project was canceled due to extensive cost of the projectile.

“It has far less gearing, but it’s still the next generation that will be used on the same battleship,” he said. “It’s still in the prototype stages, but we have a hand in that as well.”
Excel is also manufacturing the gearing for retrofitting the Kaiser Class oilers, which are the refueling and resupply ships for the U.S. Navy, according to Herr.

Many of the projects Excel is involved in are still in the early development stages, and, in many cases, are confidential.

“We’re doing some negotiating and prototyping for gears for some other customers,” Chinnusamy said. “But right now we can’t disclose any details.”

But some of the other projects include gears for military aircraft, according to Herr.

“We’re working on some experimental aircraft components including printed gears,” he said. “We’re not actually producing the printed parts, but we are machining the printed materials. So right now, nothing is in production. Everything is in prototype and design testing. The gears we’re doing now are for advanced rotorcraft projects.”

Another project involves Future Vertical Lift, according to Herr.

The technology would create new rotorcraft using new materials and designs that would allow the aircraft to be quicker with a longer range, better payloads and that are more reliable and easier to maintain and operate.

“Basically it’s making helicopters go to aircraft speeds instead of the speed limitations that helicopters normally have,” Herr said.

But Excel’s innovation and expertise doesn’t stop with its military projects.

“In 2017, we produced custom gearboxes for the world’s largest pile driver,” Herr said. “It drives piles 30 meters in diameter. It’s used in the new airport expansion project for Sanya Island in the South China Sea.”

Excel has also jumped into the turbo compressor business, according to Herr.

“We see turbo compressors as an emerging market,” he said.

Part of the turbo compressor market would involve remanufacturing and retrofit suppliers, according to Herr.

When not working on high concept projects, Excel works with customers much like any other gear company, according to Herr.

“Generally they come to us to solve a problem that they have, whether it be premature failure, a quality problem, or they’re wanting to double the amount of work they need for a particular gear train,” he said. “And they come to us looking for solutions and opportunities in improved materials and heat treat.”

Chinnusamy also said Excel is involved in the retrofit of wind-turbine gearboxes as well.
“At the present time, we are working on wind-turbine maintenance, repair and improvements,” he said. “Some of the gearboxes in windfarms are prematurely failing.  They approached us to come up with ways to make gears that last longer. We are working with them right now looking at materials and all the other things in order to solve the problem.”

Many of the failing components will be reverse engineered by Excel in order to improve the products or materials used, according to Herr. The company is looking at ways to make improvements and be able to do it domestically.

“There is a need out there to improve the gearboxes that are currently in service,” he said.

Gear manufacturing is still a strong industry, but it is suffering from a unique problem, according to Herr: lack of people.

“We’re experiencing, much like everyone else, a lack of trained employees or lack of employees period, or they’re extremely difficult to find,” he said. “They’re not getting the technical side of exposure in high school or even the technical or trade colleges. That continues to be an ever increasing battle every year.”

As the gear environment changes, it does make it difficult to predict the future, but Chinnusamy and Herr said they expect Excel Gear to roll with those changes.

“I would predict this company to continue as more of a boutique gear company,” Herr said. “Because a lot of them are either merging or growing through acquisitions. We will try to remain somewhat organic and continue along the technical or problem-solving realm going forward, so we’re tackling the challenges and not just making simple tractor parts, for example.” 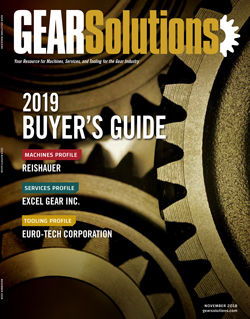