It’s not often that you call a company, even a small one, and get the owner on the other end of the line. But when Gear Solutions called New England Gear to offer congratulations on its 20th anniversary this year, it was Jeff Barnes, founder and sole proprietor, who answered the phone.

This personal relationship with its customers is one of the reasons New England Gear continues to have a solid reputation in the gear manufacturing industry. And over the last 20 years, accessibility to its customers has remained a top priority.

“The relationship with my customers is not only a business relationship, but also a personal one,” Barnes said. “I want to be there for them and communicate one-on-one. Here, they have someone that they can call to always get whatever knowledge or answers to the questions they have. Our customers know that we do a superior job remanufacturing the machines and offer more options and technical support.”

Barnes continued, “We are a source of information, not only about the gear machines we remanufacture, but also about the operation of the machine as well as the gear-cutting industry. Customers have a direct link to someone who has been cutting gears for 35 years, and they can call me and get real answers. It’s worked for the past 20 years, and we expect it to work for another 20 more.”

Having grown up in a gear job shop, Barnes has been disassembling and rebuilding Fellows machines since he was a teenager. Now that he has his own company, he strives to keep it at a small, manageable size, allowing New England Gear to focus on specific types of customers and industries.

“We don’t go after the big OEMs like Catepillar, General Motors, or Ford,” Barnes said. “We concentrate on smaller shops and subcontractors for those large companies.”

According to Barnes, New England Gear is the only company that specializes solely in 100 percent remanufactured Fellows CNC gear shapers, whereas its competitors do all types of machines. Its focus on the Fellows machines rather than getting involved with hobbers, grinders, or other equipment gives the company the ability to invest in and develop new hardware and software that greatly enhance the versatility of the shapers, making them more operator-friendly and efficient in reducing cycle times. The company has a staff of electrical engineers who design all custom software and do all machined parts in-house at its 14,000-square-foot facility located in New Britain, Connecticut.

In the gear industry, New England Gear is known for its superior standards in the servicing and selling of Fellows machines and parts. The company offers remanufactured Fellows 10-2s, 10-4s, and 20-4s with special optional equipment. Some of these options include swing-away center supports and throated risers, which will allow a customer to cut a part with a larger flange diameter. It also offers features that will allow a customer to cut a 13-inch pitch diameter on a Fellows 10-4. A 6-inch stroke option or true cutter positioning option for 10-4s or 20-4s are also available, as well as  Fellows 20-8 and 50-8 full CNC Hydrostroke gear shapers.

New England Gear has invested in more than 150 Fellows gear shapers in stock waiting to be remanufactured to a customer’s specification. At any given time, a minimum of six machines are coming through the shop. The company works on speculation, meaning that it buys machines ahead of time and starts remanufacturing the machines in advance of having an order for them.

“In the past 20 years, we’ve only had a machine finished that wasn’t sold for three months,” Barnes said. “The rest of the time, the customer buys the machine before we’ve finished building it.”

The benefits of purchasing a remanufactured Fellows gear shaper come down to price and delivery. “A New England Gear remanufactured machine is 60% the cost of a new machine and deliveries are 12 weeks instead of 8 months,” Barnes said.

While New England Gear mainly sells their remanufactured Fellows machines in the U.S., it also has machines in Mexico and Canada. “We provide thorough training included in the price of the purchased machines, and when someone needs help, we go to them, anywhere the machines are.”

Looking to the future, the company has plans to offer new products and features, which include developing the 10-4 into a 6-axis machine instead of a 4-axis machine.

New England Gear will be at the upcoming Gear Expo October 20-22, at booth #1419, bringing one of its remanufactured Fellows machines.

“At every AGMA gear show, we bring at least one remanufactured Fellows shaper with us,” Barnes said. “We will be doing the same this year. We won’t build a special machine to bring to the expo because each machine we remanufacture is an example of the type of exceptional quality we offer.”

And, if you’re wondering how often Barnes answers the main phone line at New England Gear, he said “90% of the time.”

FOR MORE INFORMATION, go to New England Gear’s newly designed, mobile-friendly, and dynamic website, www.newenglandgear.com, where you can view high-quality images of Fellows machines as well as detailed specs and equipment options. Barnes can be reached at (860) 223-7778 or at jeff@newenglandgear.com. 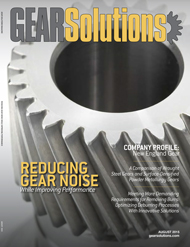