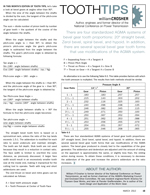 In this month’s edition of Tooth Tips, let’s take a look at bevel gears at angles other than 90º.

When the sine of the angle between the shafts is divided by the sum, the tangent of the pitch-cone angle can be calculated:

The sum = divide number of pinion teeth by number of gear teeth + the quotient of the cosine of the angle between the shafts.

When the angle between shafts is < 90º the formula to find the pitch-cone angle becomes:

The straight bevel tooth form is based on a symmetrical rack, unless the ratio of the top lands exceeds 1.5:1. The addendum is modified for each ratio to avoid undercuts and maintain strength. The teeth are full depth. Stub teeth are not used because they result in a reduction in contact ratio. The face width is limited to one-third the cone distance, as previously discussed. A larger face width would result in an excessively smaller tooth size at the inside end, making it impractical for the cutting tool to operate. Teeth with long and short addendums are used. (Table 1)

The end thrust on bevel and mitre gears can be calculated as follows:

An alternative is to use the following Table 6-3. This table provides factors with which the tooth pressure is multiplied. The results from both methods should be similar.

There are four standardized AGMA systems of bevel gear tooth proportions: 20º straight bevel, Zerol bevel, spiral bevel, and hypoid. In addition, there are several special bevel gear tooth forms that use modifications of the AGMA system. The bevel gear produced is closely tied to the capabilities of the gear generator. The addendum and dedendum are adjusted until the amount of sliding on the approach is approximately the same, or slightly less than, the sliding action during recess. To obtain these conditions, it is necessary to decrease the addendum of the gear and increase the pinion’s addendum as the ratio increases.