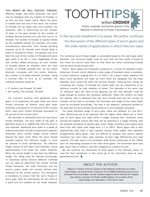 The backlash is subtracted from the axial worm thread thickness. The face width of the gear is generally equal to or slightly less than the worm’s root diameter. Additional face width is a waste of material and does not add a proportional capacity. Globoidal worm thread length cannot extend beyond the base circle. When the worm thread extends beyond the effective length, it must be relieved to avoid interference. The effective length should be the base circle diameter, minus approximately 0.10 times the center distance. When the actual length is less than the effective length, the rating must be reduced accordingly. In cylindrical worms several different methods can be used to determine the normal chordal thread thickness. The tooth thickness and the worm’s space width are usually defined with reference to the normal section. The calculation is necessary to ensure that the worm thread or worm gear tooth tip thicknesses do not come to a point and are suitable for the loads imposed. The cylindrical worm thread length is calculated based on the worm gear pitch diameter. The minimum length must be such that the face width is equal to five times the worm’s axial pitch so that there are three contacting threads and an extra thread at each end.

Ratios: Worm gears are frequently produced to a series of standard center distances. At each center distance a wide range of standard ratios is available, in some instances ranging from 5:1 to 100:1. For a given center distance the pitch circle diameters are fixed, as more teeth are designed into the fixed diameter worm wheel the teeth will become smaller, reducing their rating. By increasing the number of threads the wheel teeth can be maintained at an optimum number for that diameter of wheel. The diameter of the worm has no influence upon the ratio of the gearing, but the root diameter must be large enough to prevent any excessive deflection. When the centers are fixed the desired ratio is obtained from the worm thread lead and the number of threads. As the lead is increased, the thickness and height of the wheel teeth must be increased accordingly. The lead is the distance, measured parallel to the axis that the worm thread would advance in one complete revolution.

The usual standard range of worm gear ratios are between 5:1 and 60:1, lower efficiencies are to be expected with the higher ratios. When two or three sets of worm gears are used within a single housing their combined ratios provide the highest overall ratio that can be obtained in a single housing, with the possible exception of epicylic gear units. Single reduction worm gears have been built with ratios that range from 1:1 to 300:1. Worm gears with a ratio approaching unity have a load capacity several times higher than standard straight-faced spiral gears. They are difficult to produce and require special machines but have many uses because of their high efficiencies and load capacity. The sets used in the Sunbeam shaft driven motorcycle of the 1950s were an interesting example of low ratio worm gears. The six-thread worm and gear had a ratio of 3.833:1 and were designed on centers of 2.25″.

We will continue our discussion of worm gears in the February issue. To read the first installment in this series go to the December issue at www.gearsolutions.com. 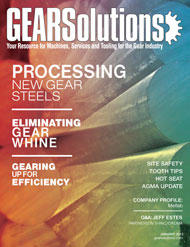