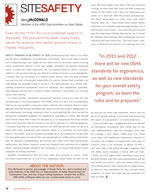 Safety training is an aspect of our professional lives that is too often put off due to budgetary or production constraints. Due to the slow economy we’re experiencing, now might be the ideal time to promote safety training since production allows it and the budget shouldn’t be greatly impacted since it really isn’t that expensive. As I’ve stated before in these columns, safety is not an area that we can afford to scrimp on from a cost standpoint. I realize that you’ve heard it a million times before, but one bad accident can put you out of business, especially if it can be shown that you didn’t do everything you possibly could to avoid it. The development of a safety plan, making protective equipment such as earplugs and eyeglasses available, and placing first-aid kits in clearly visible locations could allow you to avoid injury, and liability!

In recent months “pandemic awareness” seems to have become the new catchphrase of the fearmongers. The H1N1 virus is a very real consideration that we as responsible employers must confront, but I believe that it is manageable with the proper handling. We must provide the proper safeguards for our employees, including training in how to avoid getting the virus as well as having the available supplies for cleanliness available for them. We should also inform them that if they do become ill, it is imperative that they remain home until they are fully recovered so as not to spread it to other employees. I recently read that an infected person can still spread the virus for up to a week after their symptoms have abated. There is a separate flu shot available for the H1N1, and we should encourage all of our employees to get both the annual flu shot as well as the one specifically for H1N1 and provide facilities for frequent handwashing. We should also make sure that lunchrooms, bathrooms, and other common areas are cleaned and sanitized on a regular basis, and discourage eating at the machines or in areas that haven’t been prepared as dining facilities.

Another consideration that we must take into account is travel. There are often times that we or one of our employees must travel as part of our jobs. We must make sure that if the trip involves visiting an area that has been hit with numerous cases of the H1N1 virus, that our employees are aware of it and can take the proper precautions. We don’t want them to come back and infect others, after all. I have seen some plans where employers are actually quarantining travelers for a period after their return. I was told that they would pay the employees during this period, as it would be cheaper than having other employees become infected and miss work also. The best news, however, is that this flu season isn’t turning out to be as serious as many had expected, which may be proof of people taking it seriously and practicing the types of precautions I’ve mentioned here.

Some months ago I suggested that you should all familiarize yourselves with OSHA due to the new administration and the changes that may be coming. I see where OSHA has now hired more than 150 additional inspectors, intends to increase the number of inspections this year to 44,000—this is an increase of about 11,000—and also has a bill going through Congress that will make some charges a felony with jail time. I think you will agree that spending some time getting familiar with the new requirements will be well worth your while. I also see that in 2011 and 2012 there will be new standards for ergonomics, as well as new standards for your overall safety program, so learn the rules and be prepared for that as well.