Low-noise behavior in standard industrial gear units is becoming an important selection criterion and a factor indicating gear quality to the customer. In several gear tests and practical researches the gear contact ratio has been reported with a large effect on noise level, especially in spur gear applications. Lower noise levels are generally associated with gear design leading to higher contact ratios. For this reason a gear design with a high contact ratio is an important key for reducing noise levels. In this paper, guidelines for designing high contact ratio spur gears generated with standard tools of 20° profile angle and tooth addendum modification with profile shift on gears are presented.

The main problems in gear design have changed over time. Previously size, interchangeability, strength, and efficiency were the principal concerns in the gear design process. Nowadays vibrations and noise have become increasingly important considerations, due to the fact that quieter gears are considered an indication of product quality.

In the past relatively high noise levels were generally accepted for gear units. Occasionally low noise requirements were met by using sound protection hoods over the installation, resulting in higher costs while decreasing accessibility for maintenance and inspection. Equipment silenced by protective hoods has not enjoyed a good reception in the market, even in the case of extreme applications, due to the additional weight and volume.

Advances in engineering, and increased workspeeds in current gear applications, have made it apparent that noise and vibration are undesirable side effects associated with the use of gears in mechanical transmissions. With market pressures for higher power densities, the development of high performance mechanical drives with reduced noise present a generic problem in the power transmission market, and especially in the various gearing fields.

Since the noise generated is widely accepted as a measure of the total quality of a machine, its reduction is now expected. This calls for gear designs in which the reduction of gear noise can be achieved. Gear users and customers alike now require low noise levels in their state of the art of industrial gear units. New noise specifications, rules, regulations, and standards about occupational noise exposure are demanding gear transmissions with lower noise levels. Typical sound levels for enclosed gear units according ANSI/AGMA 6025-D98 [1] are shown in Figure 1.

Gear noise has several causes, and many factors can play a role in ensuring a quiet gear mesh. Generally, a good solution requires a balance between silent running characteristics, economic concerns, ease of manufacturing, and satisfactory performance. The result of numerous experiments and research projects identify a group of factors which affect gear noise. Gear engineering specialists have defined some of the most important factors as being the type of gearing, tooth profile, pressure angle, module, gear ratio, tooth loading, pitchline velocity, and overlap ratio.

For the past 15 years the author has observed the progress made in the reduction of gear noise by higher manufacturing accuracy [2] or the choice of materials with special damping characteristics [3]. However, as it is shown in Figure 2 and Figure 3, improving gear quality by manufacturing or introducing special materials can increase the production cost while only lowering gear noise to a certain extent. Thus, the best time to solve gear-noise problems is at the design stage, with many factors playing a role in ensuring a quiet gear mesh. Selecting and adjusting one or more factors that influence noise during design adds little to the cost, but may make a significant difference on noise levels.

It is known in gear design that decreasing pressure angle and/or increasing tooth depth can produce a reduction of internal dynamic loads by increasing the contact ratio. Since contact ratio has been reported to have a large effect on noise levels, it could be a factor to consider as an alternative design solution for quieter gears without requiring expensive manufacturing processes or drastic modification of the gear unit structure, especially in spur gear applications. Guidelines for spur gear design with a rational geometry directed to obtain higher contact ratios generated with standard tools of 20° profile angle are presented in this paper. Directions are based on the behavior of the contact ratio for spur gears depending on number of teeth, module, gear ratio, operating center distance, and addendum modification with profile shift.

Generally, lower noise levels are associated with helical gears as compared to spurs due to their higher total contact ratio. In a similar way, practical experiences indicate that spur gears with higher contact ratios also tend to reduce noise levels. Several researchers have reported that contact ratio is the most significant factor within the gear design engineer’s control with respect to noise reduction.

Experimental results by Kasuba (1981) [6] and Kahraman-Blankenship (1999) [7] have established that the dynamic loads decrease with increasing contact ratio in spur gearing. Recent gear research reported by Hedlund and Lehtovaara (2008) [8] has shown that periodic variation in gear mesh stiffness along the line of action is one of the primary sources of noise and vibration excitation in gear drives.

Really, the stiffness of each tooth varies considerably from root to tip, but with two teeth meshing the equivalent stiffness is less variable. The highest combined stiffness for two teeth in meshing occurs when they contact at the pitch points and the stiffness decreases about 30 percent toward the limits of travel, but the decrease is highly dependent on the contact ratio and gear details [9].

These results and others are important to take into account in designing for minimum noise since the contact ratio is one of the parameters the gear designer can control without drastically effecting the overall configuration of the gear system. That is, by wisely selecting the gear geometry, it is often possible to increase the contact ratio to produce a quieter gear.

As Figure 5 shows, assuring smooth continuous tooth action requires at less two pairs of teeth in contact at the ends of the path of contact. As one pair of teeth ceases contact, a succeeding pair of teeth must already have come into engagement. It is desired to have as much overlap as possible. A measure of this overlapping action is the contact ratio.

For spur gears, contact ratio is defined as a quotient of active length of the line of contact in meshing gears divided by the base pitch. Based on this definition, the contact ratio can be calculated using the following formulas. Formula 1, Formula 2, Formula 3

db1 , db2 = Base diameter on pinion and gear

Theoretical contact ratios for spur gears to be cut with standard tools of 20° and 15° profile angle and with no addendum modification were calculated for different center distances ranging from 100 mm to 500 mm, four nominal gear ratios ( 1.0, 1.5, 3.0 and 4.0), and modules according to ISO 54:1996. Some of the results of calculations for spur gear contact ratios using standard tools of 20° profile angle are summarized in Table 2. 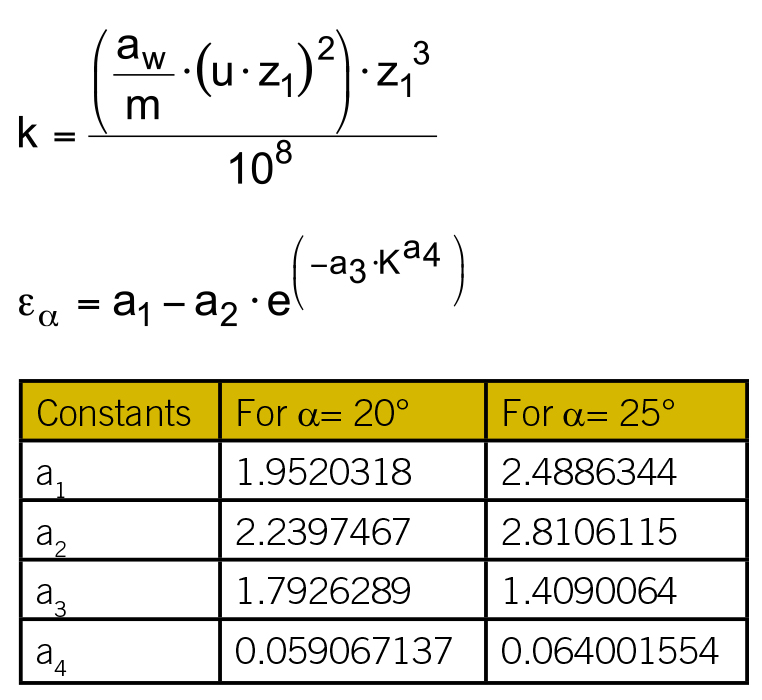 Since factor “k” appears to have an effect on the contact ratio, it would be convenient to have a gear geometry with high values of factor “k.” Based on the author’s experience, it is recommendable to achieve a balance of reducing noise level and strength capacity to carry out gear designs with values of factor “k” between 400 and 1,000. Better results are available with a higher number of teeth.

The manufacturing of the gear with profile shift by addendum modification is not more complex or expensive than gears without profile shift, because the gears are manufactured in the same cutting machines and depend solely on the relative position of the gear to be cut and the cutter. The difference can be evident in the blanks with different diameters and tooth profiles on gears.

Gears with profile shift and addendum modifications have deviations from the standard gear geometry. The difference between operating and standard center distance is an important indicator of the standard deviations, and it must be take in consideration.

Increasing the contact ratio is particularly useful in gears where the operation center distances are smaller than the standard center distance. In these cases the profile shifting in the pinion and gear may be negative, and it must be calculated to get the total required profile shifting or the sum of addendum modification coefficients.

One of the topics familiar to gear specialists working with the ISO system is the application of addendum modification to design spur gears with a high contact ratio and low noise level. Negative values of the sum of addendum modification coefficients (Σx < 0) with a correct distribution of values between the pinion and gear allow gear pairs with high contact ratios.

It is necessary to consider that a negative addendum modification coefficient introduced to obtain spur gears with high contact ratios could produce a decrease in the gear bending and scuffing resistance, mainly on low accuracy gears. For that reason, gears with negative addendum modification coefficients must be checked for bending and scuffing resistance.

In view of the fact that contact ratio has been reported to have a large effect on noise levels, it should be considered as an alternative design solution for producing quieter gears without expensive manufacturing processes or significant modifications to the gear unit structure, especially in spur gear applications. In light of this, some guidelines have been presented in this paper for spur gear designs with a rational geometry directed to obtain higher contact ratios generated with standard tools of 20° profile angle profile. Directions are based on the behavior of the contact ratio for spur gears depending on the number of teeth, module, gear ratio, operating center distance, and values of profile shift coefficients.

Numerical results of theoretical contact ratios for spur gears considering a cutting with standard tools of 20° and 15° profile angle and with no addendum modification were analyzed by regression techniques in order to estimate a statistical model that relate the contact ratio with a factor “k.” Based on the author’s experience, it is recommendable to seek a balance of reducing noise levels and strength capacity values of factor “k” between 400 and 1,000. Better results are available with a higher number of teeth.

Values of “k” and negative addendum modification coefficients. according with the calculations procedure outlined in table 3, can be used as guidelines for designing high contact ratio spur gears where minimum noise—and quieter gears—are required. 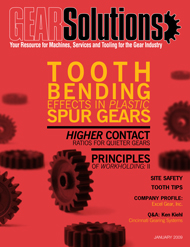 NVH analysis of an axle drive with bevel gearset