Experimental tensile fatigue data can be used to predict plastic gear life and the polyamide-based polymer loaded with glass fibers can be used for the metal replacement of gears used in applications with high power.

One of the major problems of plastic gears is the lack of data about their lifetime. Literature doesn’t contain numerous data on this subject. Even if it reported them, the number of tests, the variables involved, and the test methods are so varied that it would be difficult to compare them with those needed.

This paper presents the results and experimental tests made by Stagnoli on its technopolymer gears to provide design data.

By now, the use of plastic gears in applications that require low loads and precision motion transmission is established. The reason for this lies in the fact that plastic gears provide a number of advantages over metal gears: They have less weight, have less inertia, and are quieter than metal. Moreover, they can be used without lubricant and can be used in chemically aggressive environments thanks to their chemical inertia to a large number of substances as well as having low material and manufacturing costs.

The current challenge is to focus more on power transmission applications with high loads, high number of cycles, and high temperatures, which represent the actual limits of plastic gears. In fact, it is known [1–2] that the causes of technopolymer gear failure are: tooth bending breakage, wear, and thermal damage. For this reason, it is important — in addition to taking into account the guidelines of how to design a plastic gear [2] — to focus on critical points mentioned above. Unlike steel gears in which the design is consolidated by the standards guidelines (ISO, DIN, AGM), analytical methods, equations, and data in the literature, the design of plastic ones is more complicated. Gear designers often face a lack of material data that prevents them from using the material to their full capacity. One reason is the complexity of data generation. For example, in the case of S-N flank fatigue, gears need to be tested at different load levels, temperature levels, with different lubrication types, and material pairings. As the choice of gear material and lubrication is broad, an infinite number of material combinations would need to be tested. Moreover, the flank fatigue results might be influenced by the tested gear geometry. So, designing technopolymer gears requires a degree of experience. Many new designs are based on proven concepts of the past. This is certainly true for plastic gears, where at the moment this comparative, best practice method is the safest way to operate.

Starting from this assumption, Stagnoli T.G. decided during these years to characterize its standard gears by making internal tests to provide useful data about the lifetime and breaking loads of its gears. (Table 1)

The plastic material used in tests is a polyamide PA6 filled with 30 percent of glass fiber. Nylon is a thermoplastic material widely used in gear production [3] because it is characterized by a high level of crystallinity (60 percent). In order to improve polymer gear performance, glass fiber is being increasingly used because it offers a potential increase in gear performance [4].

Gear geometry: The gear geometries are listed in Table 1; injection molding of the technopolymer gears was performed by Stagnoli, Lonato del Garda, Italy.

This device contains two gear pairs, a metal driving gear pair, and the plastic testing gear with another metal gear, connected by shafts.

In this way the technopolymer gear represents the weak link in the chain. Via two rigid joints, a preset torque is applied on both gears set. Using such a closed-loop system is very beneficial in that the input power is only required to overcome the frictional and hydrodynamic losses of the gears and the frictional losses in the bearings.

The torque and rpm are monitored using a torquemeter and a software.

All tests were run at 300 rpm and 50 Nm of torque in the worst conditions, i.e without lubrification and 24-hour running. Supported by a previous gear design by KISSsoft, Stagnoli has to choose this torque value to determine mechanical behavior of technopolymer gears to high torque power transmission applications.

In Graph 1, the Wildhaber (chordal distance that takes into account the pitch and thickness of the teeth) is reproduced as a function of the number of cycles the gear has completed. It is measured before the test, in every intermediate step, and just before the break. The graph is an average of three tests conducted under the same conditions on three samples (50 Nm, 300 rpm). The Wildhaber is an indication of the wear of the sample. As you can see, it decreases linearly and dims up until the onset of the break.

In Figure 2, damage morphology is shown. It can clarify how the break occurred. Certainly, the wear has played an important role, but the dominant cause was the high load. The break occurs due to the appearance of tooth-based cracks (as can be seen), which caused the subsequent detachment of tooth.

In Graph 2, the torque versus the number of cycles is shown. As expected, with increasing torque, the lifetime decreases in exponential terms.

Considering this test and the Wildhaber values detected at the beginning and end of the tests, another interesting data set emerges. As can be seen from Table 2 and Graph 4, the percentage of wear that occurs on the sample increases as the number of revolutions per minute increases. From this, we can draw another point of reflection if we consider the whole phenomenon of the breaking on a gear. If the revolution per minute increases, the weight of the wear component plays a more significant role than the role of the fatigue stress component.

In the test carried out at 100 rpm, it can be seen that the break occurred due to fatigue rather than wear.

Experimental tensile fatigue data can be used to predict plastic gear life. Tests carried out by Stagnoli provide useful data in this regard.

They point out that the polyamide-based polymer loaded with glass fibers can be used for the metal replacement of gears used in applications with high power; furthermore, they confirmed the results of KISSsoft going beyond expectations both in terms of duration and in terms of maximum transmissible torque. An S-N curve was also provided, emphasizing the fact that, as expected, as the transmitted torque or number of cycles increases, the lifetime decreases. Another interesting aspect was evaluating the upper hand of a phenomenon rather the other responsible for the breaking of the gears. 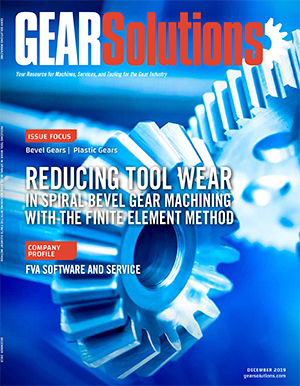