Today’s measurement technology from Hexagon Metrology is up to the task of inspecting the complex forms of a wide variety of gears and related components.

The history of gears goes back millennia. For a long time it was believed that the differential gearbox was invented in the 13th Century. Then comes the discovery of a wreck off the Greek island of Antikythera, where an archaeologist discovered a mysterious gadget that contained a differential gearbox. Today scientists presume the Greeks calculated the movement of celestial bodies using this mechanism around 150 years B.C. It is also known that the Greek mechanics of the Alexandrian school wanted to match their gears as exactly as possible. Clearly, they would have embraced the high accuracy metrology systems of today.

From Micro to Macro

Gears transfer torque or alter speed, and they have become an indispensable part of modern life. They are found onboard ships, cars, trucks, and rail vehicles. They transmit torque in wind turbine generators, guarantee movement in mills, and they are even part of the human body as part of a micro-gear in tiny insulin pumps conveying small doses of vital hormones into the bloodstream. (Figure 1)

Micro-toothed gears, barely visible to the human eye, have an outer diameter of less than 500 microns. This is the size of a single cell organism. At the other end of the spectrum are gigantic gears with diameters exceeding 15 meters. The diversity of gears is just as immense. The family of cylindrical gears comprises straight, helical and double-helical gears, splines, dog clutches, individual gear segments, and gear racks. Bevel gears are another genre, and then there are worms and worm gears. And don’t forget the cutting tools used to manufacture the gears—hobs, broaches, cutting wheels, or grinding wheels.

All types of gears require dimensional verification to ensure reliable, long-term performance. A variety of 3D coordinate metrology technologies are utilized to inspect and measure gears from stationary coordinate measuring machines (CMMs) to portable laser tracking systems. Optical sensor technologies, as well as tactile measuring devices, are commonly used solutions. CMMS can effectively measure both gears and other production parts, which is their primary advantage over conventional gear measuring devices.

Stationary coordinate measuring devices with various measuring ranges are ideal for particular gear specifications. At the high end, ultra-precise gantry CMMs are used to measure planetary gears with diameters of several meters, and gear housings weighing several tons that are used by the wind power industry. At the other end of the spectrum, bridge CMMs are employed to measure small- and medium-sized gears. For complex gear applications, QUINDOS measuring software can be upgraded with special modules and options for all types of toothed wheel and toothed wheel tools. A practical solution for simpler applications—such as measuring straight and helical spur wheels without modifications—is the PC-DMIS gear measuring software. (Figure 2)

A good example of gear verification can be found at SBS Feintechnik, a part of the Burger Group. The company produces both drives and drive components that are metallic, plastic-metallic, and plastic-rubber. Using a Global Advantage CMM for inspection, gear characteristics are checked using a module of 0.3 to 4.0 and larger. “During our two-shift series production, we inspect gears for several characteristics such as profile and flank lines, tooth widths, diametric ball mass, and pitch, all of which impact the process or the use of the component,” says Stefan Bayer, head of quality management at SBS.

To reduce the correction loops of an injection tool, the CMM is also used to inspect die inserts for gear characteristics based on the related CAD model. “The Global is a universal machine that enables us to fully measure all characteristics of the gear,” according to Klaus-Dieter Schüssele, instrument engineer.

Small-dimensioned gears are used in the miniature drives of clock movements, in car seat adjustment mechanisms, and in car door window lifts. When it comes to measuring these tiny parts, vision systems use optical sensors to effortlessly measure the profile and pitch of the tiniest straight gears, either metal or plastic, without bending the fragile parts or shifting the workpieces. The Optiv line of multi-sensor measuring systems from Brown & Sharpe can dimensionally inspect 2D and 3D features of a micro-gear to the tightest production tolerances. (Figure 3)

There are times when it makes economic sense for the metrology device to travel to the object for in-place measurement or inspection. In the case of oversized gears, portable measuring machines definitely come into play. When measuring large straight or helical gears, or capturing unknown geometric dimensions via reverse engineering, engineers often reach for an articulating arm. For example, the “unknown gear” option in the QUINDOS software program utilizes the scanned data from a ROMER measuring arm to calculate all critical parameters such as standard module, angle of attack, and helix angle, etc. The teeth can be cloned digitally and reproduced to replace an outdated gear in a mill, for example, and without a problem.

The Stahlwerk Augustfehn facility in Apen, Germany, has earned the name of “Das Stahlwerk im Grünen” (the Steelworks in the Countryside). The company is primarily engaged in the production of forged components in the form of wear parts for various applications in the crushing, recycling, cement, and materials handling industries. Augustfehn has been particularly successful in the market for customized one of a kind components and small batch production. A special area of work is the manufacture of crown gears and large roller bearings for the mining and port goods handling industries. Some of these parts have diameters of up to 22 meters.

Stahlwerk Augustfehn reacts quickly and confidently to their customer’s special requirements. Large components do not cause undue stress, even if they are used for engineering giants like overburden excavators used in opencast mining or bucket wheel loaders, which present a challenge based on their large compression stresses due to self-weight (up to 15,000 tons), enormous tensile stresses, and accelerated frictional wear on all their components. Every part must be of high quality to ensure these excavators have a long working life. (Figure 4)

The steelworks was awarded an order to manufacture a 12.7m diameter crown gear with an involute tooth system. For this project a slewing bearing was required to complete a bucket wheel loader, which was to be newly installed in an Australian opencast mine. Highly precise 3D measurements of the new part had to be undertaken to fulfill the order. The manufacture of crown gears of this size can only be accomplished in segments. The steelworks also wanted to check the dimensions of the crown gear when the 11 separate segments were assembled.

Before this order came along, no customer had ever stipulated an acceptance procedure that required the use of an external measuring instrument. Up to that time the company used conventional methods of checking the dimensional integrity of their products. Now they had to check each segment for compliance with the specified tolerances in the assembled condition. This was a new challenge for the staff at Augustfehn.

It was soon apparent that the only type of measuring instrument to be considered was one capable of measuring large distances to an accuracy of less than 0.1 mm. During their search for a suitable solution, a new company by the name of AfM Technology GmbH Ost of Burg, Germany, came to their attention. This company offers various services and engineering solutions in the area of industrial metrology, including the calibration of tool and coordinate measuring machines using self-tracking laser interferometers, and portable industrial measuring procedures using laser trackers. The experience and flexibility of AfM Technology impressed the steelworkers. (Figure 5)

At first, the scope of this measurement exercise was not clear. Stahlwerk Augustfehn placed particular importance on having a flexible measuring instrument. To fulfill this wish, metrology specialists from AfM Technology carried out the measurements using a Leica Absolute Tracker and a Leica T-Probe wireless probe. The laser tracker is a portable CMM with its own internal battery and a built-in WiFi connection to free the device from external data or power cable requirements. Its typical measurement volume exceeds 160m (525 ft) when used with a corner cube. With endless telescope rotation, the sensor can measure a full 360° horizon and a 290° vertical dome. With a typical radial volume of 320 meters, the laser tracker set a new benchmark for very high precision over long distances.

The Leica laser tracking technology combines the strengths of both measurement principles of the absolute distance meter (ADM) and an interferometer (IFM). The Absolute Interferometer (AIFM) technology (patent pending) ensures high-accuracy measurements in all operating conditions, with multiple built-in redundancies that guarantee steadfast accuracies throughout the measurement volume. The Leica Absolute Tracker also has a unique “all in one” system design that incorporates built-in live video, level to gravity, environmental monitoring, and even an integrated IR remote control. (Figure 6)

When used with a Leica T-Probe, a portable walk-around CMM, the operator can complete the difficult task of measuring gear teeth from just one instrument setup. With new longer styli, the wireless probe reaches up to 30m (98 ft) in any dimension, with an output rate of 1,000 points per second. The lightweight, handheld device is used to probe hard to reach points, or hidden points without a direct line of sight to the laser tracker. To illustrate its large measurement volume capability, the probe can be used to measure up to nine cars in one setup, or inspect large aerospace components with minimal setup times. This advantage is easily applied to the inspection of multiple large gears from one and the same setup of the instrument. Plus, the Leica T-Probe has all the advantages of a fixed CMM, but it does not require a measurement lab and a time-consuming logistical process to move heavy parts to a CMM table. (Figure 7)

The services of the laser tracker were soon called upon during the assembly process of the 11 separate segments. Each segment was aligned horizontally by the steelworkers using the Leica Geosystems precision level NIVEL230 inclination sensor, and then slid into position so that only minimal corrections would be necessary in the final phase. (Figure 8)

The Australian client saw for himself the quality of the crown gear. In the final inspection the Leica Absolute Tracker demonstrated compliance with planarity, distance, and tolerance requirements Figure 9. The inspection records were produced without delay. For the steelworks, laser tracker technology solved a longstanding problem: the measurement of long distances between selected teeth. The laser tracker quickly captured and supplied those measurements. In addition, the project represented a completely new form of 3D inspection. The measurement results were comprehensive and highly accurate, ideal for the large volume components of the high quality forge Figure 10. In the end, portable metrology opened the door to a new dimension in industrial measurement for the steelworks company in the countryside. 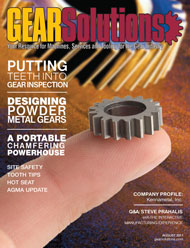