The gear skiving process was first introduced over 100 years ago. The machines and tools of the time were not up to the task, so the process never gained widespread acceptance or usage. Skiving has reemerged periodically and is enjoying a current resurgence. Now, as when originally introduced, there is a need to improve tool life and part quality and reduce cycle time, and these objectives are being achieved.

Like most advancements in manufacturing, breakthrough technology is a result of a dedicated cutting tool engineering department like the one at Mitsubishi Heavy Industries Machine Tool Co., Ltd. (MHI). Significant advancements are nearly always the result of a concerted effort and true innovation.

Initial work on skiving machines at MHI dates back over 20 years to a machine developed and used in-house to solve a particular manufacturing issue. This machine was successful for use within the company but was not marketed or sold commercially.

The first HSS dry cutting tools were developed and brought to market by MHI in 1996. The development of both the substrate and the special coating were integral to the success of this advancement in gear manufacturing. Revolutionary when it was first introduced, dry hobbing is now commonplace.

Once thought impossible, dry shaping was developed by the tool engineering team at MHI. The goal of high-precision dry shaping was achieved with development in parallel with dry hobbing in 1996.

In addition to the improvement of the work and natural environment, processing without the use of cutting oil using the MHI Super Dry shaper cutters extends tool life by two to five times compared with TiN-coated wet cutting. Cutting times are typically twice as fast as wet cutting.

Three specialized types of tools have been developed and tested so far by the MHI team, utilizing experience gained from the successful development of the ZI20A internal gear grinder. Instrumental in this progress was the collaboration of the Mitsubishi Technical Center and the expertise of Seiichi Hashimoto.

The evolved tapered and barrel-shaped worm wheel served as inspiration for the new Super Skiving tools.

To speed up the iterative testing methodology, 3D printing technology was used to make prototype cutters. They were then mounted on a modified ZI20A grinder and used to cut plastic test gears. This process was used throughout 2014 as the design and cutting process was studied and modeled in software.

As higher metal-removal rates were developed, a powerful ZE40A grinder was modified to use for testing new cutter designs. Super skiving was then introduced at JIMTOF machine tool show in Japan in fall 2014.

Nakamura and his team faced several challenges to achieve the eventual breakthrough. To accurately cut at high speeds, the individual teeth of the cutter must have high rigidity. At the same time, the essential goal was to dramatically improve tool life. Leveraging the expertise at MHI’s technical headquarters, the tooth design was modeled and designed with specialized cutting-force software. The tapered barrel shape is one of the results of this extensive research and development.

The pinion-type skiving cutter operates at a crossed axis with the workpiece while rotating synchronously. This generates a sliding motion at the contact point, thus creating the cutting motion. However, this creates large cutting resistance because the angle between the rake face of the tool and the face of the workpiece becomes significantly negative (obtuse).

In the process of solving the skiving tool-life problem, MHI’s tool engineering group turned to the technology developed for internal grinding for the ZI20A machine. This utilizes a threaded wheel with a barrel shape to eliminate interference. The use of the highest possible crossed axis angle increases the sliding velocity and improves efficiency. (See Figure 1.) This new design has been granted a patent in Japan with patents pending in the U.S. and worldwide.

The actual cutting action of the Super Skiving cutter is similar to the conventional pinion-type tool. The advantage comes from the multiple blades (see Figure 2, item b) for cutting the tooth space rather than just one cutting blade. By using a tapered roughing portion of the tool (item c), all three blades are involved in cutting. For example, if a pinion cutter requires three cutting passes to create the gear, the Super Skiving tool can remove the same amount of material with one pass because it has three times the number of cutting blades (item b).

Developed entirely in-house, the software that needed to evaluate the cutting reaction forces was developed in parallel to the early work on the tools. (See Figure 3.) It was clear early on that the cutting situation was complex, and relying totally on trial-and-error methods would be too slow and imprecise. By inputting the workpiece geometry, the tool design information, and the cutting conditions, multiple simulation runs can be made to determine the exact tool and cutting conditions needed to maximize tool life without compromising quality.

Increasing the number of parts between sharpening by reducing chip loading was achieved by greatly increasing the number of teeth. (See Figure 4.) This seemingly logical and obvious solution hadn’t been developed in over 100 years of skiving history, making this a true “Aha!” moment in gear tool advancement.

Another New Idea Emerges and Is Tested

During the development and testing process of the new tools, Nakamura had an idea. Instead of a one-piece, three-tier cutter for helical internal gears, he proposed a three-piece assembled tool. By making the tool in three parts, the cutting edges could be stagger ground if needed to the precise compound angles needed to optimize the interface with the workpiece. Set to the correct crossed axis angle, this would yield the best cutting situation for tool life and profile quality.

Although 700 pieces represent a huge improvement compared to conventional pinion-type cutters, the team wasn’t satisfied and believed that more was possible. The development of the three-piece cutter and subsequent incremental improvements have resulted in additional tool-life improvements. Using a proprietary MX-1 substrate material and special MHI coating, a recent test produced 1,200 in-tolerance pieces before tool sharpening was needed.

These advancements were made possible by the innovative thinking of the MHI tool development and machine development teams.

Along with the vastly improved tool life comes less downtime for tool changes, further increasing productivity and reducing per-piece cost. One reason for these advancements can be attributed to the fact that the machine and tool development process is under one group and under one roof. This provides a collaborative and coordinated approach, which has yielded these excellent results. Combined with the MSS300, built specifically to exploit the new tools’ productivity, MHI’s Super Skiving is fully realizing the promise of skiving for internal gear manufacturing.

The new Super Skiving tools, with the huge increase in metal-removal rates, presented a challenge to existing skiving machines. To answer that need, MHI developed and has introduced the new MSS300 Super Skiving machine, specifically developed to take advantage of new tool designs. Rigidity and power are required to maintain accuracy while the massive spindle allows for aggressive feed rates. The vertical axis drive has two servo motors for control and power.

One- or two-pass production is now possible, with ISO 4 and 5 quality already achieved in testing.

The team responsible for the MSS300 is headed up by Jyunji Usude and includes Toshimasa Kikuchi, and Chihara and Keisuke Yoshikawa. 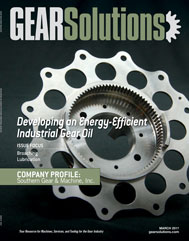 Static and Fatigue Calculations of Wind Turbine Gearboxes: Part I