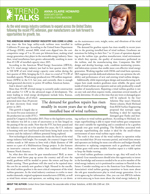 The American wind energy industry has come a long way since the first large utility-scale turbines were installed in California 35 years ago. According to the United States Department of Energy (DOE), around 2000, wind costs dipped into the cost-competitive range of 5 to 10 cents per kilowatt-hour, making wind energy generation a key player in the renewable energy industry. Since then, wind installations have grown substantially, resulting in more than 65 GW of installed capacity since 2015.

According to the American Wind Energy Association (AWEA), the U.S. wind energy industry just had its best quarter since 2012 as 520 MW of new wind energy capacity came online during the first quarter of 2016, bringing the U.S. closer to a total of 75 GW of installed capacity. Wind energy produced over 190 million megawatt-hours (MWh) in the U.S. last year, and currently, there is enough wind-generated electricity to power 20 million American homes.

And it doesn’t end there.

More than 10 GW of wind energy is currently under construction with another 5.1 GW in the advanced stages of development. The states leading in wind energy development include Iowa, Kansas, and South Dakota, all of which generated more than 20 percent of their electricity from wind power in 2015.

This growth is largely due to the recent five-year extension of the production tax credit (PTC) passed by Congress in December 2015. Prior to this legislative action, the industry was left in a state of uncertainty as its fate hinged on the passing of the tax credit. Now that the PTC has been passed and the industry can rely on it for another five years, the U.S. industry is booming with new land-based wind farms being built across the country and the industry’s offshore potential being explored.

New technological advancements also make the future of the wind energy industry look bright. For example, the country’s largest wind turbine stands at 168 meters in Iowa with a blade diameter of 108 meters as a part of a MidAmerican Energy project. It also features an innovative concrete tower (rather than traditional steel) from Siemens North America.

So, what does this mean for gear manufacturers? Well, as more and more wind farms pop up across the country and all over the world, gearboxes will be needed to power the towers and keep the blades turning. Those gearboxes will also need to be repaired since the cost for an entirely new gearbox is high. Housed in the nacelle, the wind turbine gearbox is the most critical component of the wind turbine generator. As the wind industry continues to evolve to meet market demands, original equipment manufacturers (OEMs), as well as wind farm owners and operators, are seeking ways to cut down on the maintenance costs, weight, noise, and vibrations of the wind turbine gearbox.

The demand for gearbox repairs has risen steadily in recent years due to the growing installed base of wind turbines. Gearboxes are notorious for failing in their first 7 to 13 years of operation depending on the turbine type, gearbox manufacturer, wind environment in which they operate, the quality of maintenance performed on the turbine, and the manufacturing date. Companies like SKF design and develop bearings, seals, condition monitoring systems, and lubrication systems that enable more cost-effective wind energy generation. Working together with OEMs and wind farm operators, SKF engineers provide dedicated solutions that can optimize the reliability and performance of new and existing wind turbine designs.

Additionally, while improved gear design and manufacturing techniques have made modern gearboxes more reliable, the gears used inside of wind turbines are expensive and are only produced by a small number of manufacturers. Repairing a wind turbine gearbox is not an easy task and often requires weeks, sometimes several months, of costly downtime. It’s also at this time that any worn or damaged gears will be replaced. In the Gear Solutions May issue’s Materials Matter column, Mark Michaud from REM Surface Engineering proposed that isotropic superfinishing is ideal for repairing damaged gear flanks and bearing surfaces in wind turbine gearboxes. According to Michaud, isotropic superfinishing is able to repair wind turbine gear components that aren’t suitable for regrinding and is considered to be a gearbox upgrade over gear tooth grinding. The flexibility associated with isotropic superfinishing also makes it ideal for the small-volume environment of most wind turbine repair orders.

The truth is that many of the wind turbines in operation today have exceeded their 20-year warranty period, and wind farm owners and operators are looking for more cost-effective and budget-friendly alternatives to replacing components such as gearboxes and wind turbine gears with newer models. Gearbox repair is a viable option to keep the blades turning.

As wind turbine gearboxes continue to age, they will need to be repaired. Gear manufacturers should seize this opportunity to invest in the knowledge and resources needed to be an active member of the wind energy industry as it is positioned to continue to flourish in the future. Consider reaching out to the American Gear Manufacturers Association’s wind turbine gearing committee to learn more about the role gear manufacturers play in wind energy generation. Go to www.agma.org for information. Also, you can visit AWEA’s website at www.awea.org to learn more about the wind energy industry.