While the requirements for more precise gears increase and production methods grow in number and sophistication, metrology provides the link that lets producers generate the products that meet today’s market demands.

Regardless of size or application, all gears depend on some degree of precision to prevent avoidable wear, power loss, and noise, and industry trends lean toward tighter tolerances, which, in turn, depend on more accurate cutting. That precision can only be ensured by careful measurement at every stage of the process.

In addition, the processes by which gears are made are ever-expanding. Many are still being manufactured by traditional subtractive milling processes using hobs. But they are also being additively sintered from powdered metal. They are being diecast in plastic and injection molded. These new processes are greatly reducing the cost and complexity of both development and production. They are allowing new products to be tested, manufactured, and moved quickly and cost-effectively to market — and in smaller numbers than ever before. What hasn’t changed is the need for precise gears, and the expectation for precision is greater than ever. 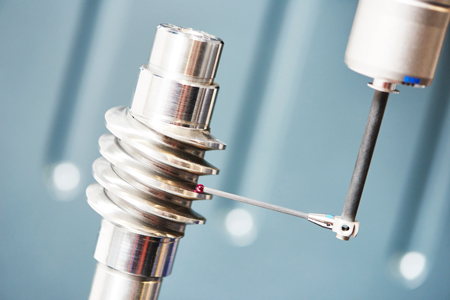 Today, gear technology is co-evolving with a variety of technologies that both require and enable the production of better, more precise gears. Just one example of enhanced gear capabilities is the high rpm gears that are used in geared turbofan aircraft engines. A planetary reduction gearbox between the fan and the low-pressure shaft lets the shaft run at a higher rotational speed than in a conventional turbofan. The gears must be manufactured to tolerances that would have been impossible just a decade ago.

To keep up with requirements like these, standards are being regularly upgraded, and processes of both production and measurement must adapt. The standards help prevent costly type I (false rejection) errors, which reduce yield or even riskier type II errors that let substandard gears pass inspection and are not identified until they fail in assembly or, worse yet, in the field.

On the buying side, metrology is being used in receiving inspection to verify suppliers’ products. And, with the right equipment, it can be used to reverse engineer existing gears to develop specifications for new production runs.

One of the biggest changes in gear metrology has been the increasing use of multipurpose CMMs to do work previously reserved for dedicated gear-checking machines. This trend has been enabled by the increasing intelligence of processors, more capable controllers, and more sophisticated software. With enough processing power, physical masters have been replaced by virtual ones that can be stored in memory and transferred from machine to machine. With the right software, today’s best CMMs can handle cylindrical, bevel, and worm gears, rotors, and hobs. CMMs are available in various levels of capability and sophistication at prices comparable to those of dedicated gear checkers to match a user’s needs. 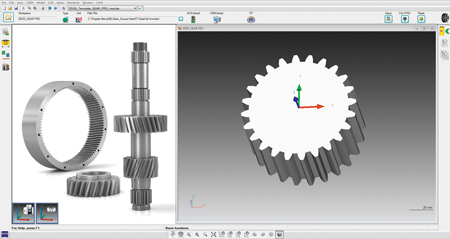 Where CMMs were once significantly slower than the dedicated gear machines, they are now close in performance. They can be as fast as the dedicated machines with only a minor sacrifice in accuracy. Or they can be as accurate with some small sacrifice in speed. For many users, these modest disadvantages are more than compensated for by the CMMs’ overall capabilities. The best way to determine whether a particular system will work in an application is to get a thorough demonstration based on that application.

The most obvious advantage of CMMs is their ability to measure other components than gears — a useful capability for manufacturers making or utilizing both gear and non-gear products. And while CMMs can require more specific programming, they are not more complex for a capable programmer, particularly for one who already knows non-gear programming of a CMM. The training that allows them to measure gears overlaps the training that allows them to be used to measure a wide variety of other components. Also, once programmed, CMMs in gear applications are usually automated and quite easy to operate. 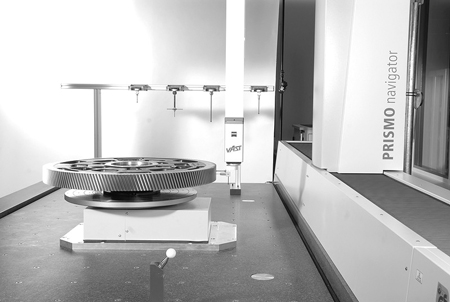 No matter how precise the machining, there will always be some degree of error in the resulting parts. In many cases, that error is very small, but when dedicated gear-checking systems scan a journal, for example, and extract the least squares or average feature, gross form error that’s unaccounted for can lead to the type 1 or type 2 errors previously mentioned. A pass pin diameter that is out of spec or problems with runout may be overlooked. CMMs are particularly adept at spotting form error. They can pick up the details that ensure form, fit, and function and that the gear will not only pass inspection and perform its individual function, but that it will also assemble correctly with other components.

Another major difference is the flexibility of CMMs in their output. CMMs can generate reporting in text, PDF format, or virtually any other format a user requires. In some cases, the format is mandated, not by the gear manufacturer, but by the manufacturer’s customer.

Metrology as a Service

Gear metrology does not have to be an internal, on-site process; it is increasingly available as a local service. Regional metrology centers have the in-house expertise and systems to check gears quickly for profile, lead, pitch, major and minor diameters, and class compliance. Detailed reports can show whether the sample is in or out of spec and provide information, allowing machining to be modified if problems are found. Services can be particularly useful for users with occasional or intermittent needs that don’t justify a large equipment purchase. And for users with their own gear-checking systems, a service center can actually write the program for a gear, eliminating the need for an in-house programmer.

Whether you are a daily or occasional user, a buyer or provider of gears, a dedicated gear manufacturer, one who produces a wider range of products, or one needing an extreme or more modest degree of accuracy, there is a system or service that will fit your needs.