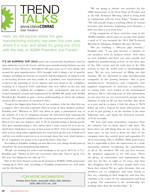 It’s no surprise that 2013 wasn’t an economically blockbuster year for most industries across the board, and the gear manufacturing industry was not immune to that. However, throughout this past year, we’ve seen things turn around for gear manufacturers. 2014 brought with it along a lot of positive changes, including an increase in research and development on subjects such as decreasing friction and heat inside of a gearbox; new requirements set to govern the reporting of severe injuries and even death in the workplace, resulting in a reported 4,405 individuals who were killed on the job, and strides made in making the workplace a safer environment; and new and revised standards created and implemented by AGMA. We spoke with AGMA President Joe Franklin to gain a better understanding of where the industry stood in 2014 and where it’s headed in 2015.

“I expect the biggest plus from a lot of our members is the fact that they saw a negative 2013 turn into a positive 2014 in terms of their business activity,” Franklin said. “Business in 2013 was down in quite a pronounced way to the surprise of a lot of companies because the forecasters kept reducing the forecast. The general conditions in the economy got worse and worse, and that flowed over into our industry, and, if all of manufacturing is fairing poorly, then gear manufacturing is, also, unless there’s some reason for it to not be. And I don’t think there was any of that reason in 2013. A lot of companies saw their activity drop rather significantly. It’s come back up this year. I think we’ll end the year within a percent or so on average above last year, which means a lot of companies are going to be a good bit better than that.”

According to Franklin, looking out into this next year, things should pick up overall for the gear-manufacturing industry.

One of the more historic events on the horizon is AGMA’s 100th anniversary coming up in 2016, and, according to Franklin, preparations are well under way for the big day.

“We are going to initiate our activities for the 100th anniversary at the Gear Expo in October and at the Fall Technical Meeting, which is being held in conjunction with the Gear Expo,” Frankin said. “We will actually begin a yearlong rollout of various activities and festivities beginning next October, a little less than a year from now.”

A big component of those activities come in the AGMA timeline, which some of you may have gotten a peak of if you attended the 2014 Fall Technical Meeting in Arlington, Virginia this past October.

“We are building a 100-year plus timeline,” Franklin said. “I say plus because a number of our members were in business before 1916 when we were founded, and there was some notable and significant manufacturing activity in the later part of the 19th century and the early part of the 20th century in that the world went to interchangeable parts. We are very interested in filling out that timeline. We are interested in what manufacturing companies in the gearing business—that is gear manufacturers, themselves, and companies that supplied components or materials or machinery or cutting tools—were leaders in the technological advances. We’re collecting some of that information on our own, but are very interested for people in this industry to help us fill out that timeline. Just shoot us a note and let us know a little bit about it. We’ll follow up with a request for more information, but as far as just getting it on the timeline is the most important part, and doing the historical research, we’ll do secondly.

“We have had some tremendous responses from the industry, but we know there’s still more. We know there are still things that are not on there.  In some cases, we just need to know the dates of the company, when they started, grew and expanded. It’s all so interesting. This is AGMA’s 100th anniversary, but it’s impossible to have the anniversary of a trade association without recognizing the contributions of all of the members. We only got here because the members supported us for 100 years. There are plenty of associations and organizations that only live for five or eight or 10 years, and then they disappear and in 100 years, people don’t even know they existed. We are quite fortunate that our members are as completive and long lasting as they are, enduring in their longevity, and that they continue to be a part of our organization and keep it going. The association is the membership. It’s nothing other than the membership.”

The importance of gear inspection and the meaning of the data