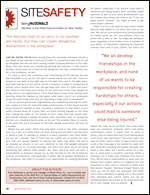 Like me, maybe you’ve been driving down the interstate and have noticed a car ahead of you weaving in and out of traffic in a suspicious way, only to pull up alongside and see the driver texting instead of paying attention to the road. Many cities and states are considering banning this practice—if they haven’t already—which puts me in mind of how dangerous this type of distraction can be in the workplace, as well.

It’s hard to deny how convenient and entertaining all the devices we now have available to us can be, but due to human nature you just can’t count on people to use them in the right way, at the right time, and in the right place. And while talking on a cell phone can be a nuisance, it pales in comparison to texting, which people think they can get away with since it’s quiet and therefore easier to hide what you’re doing. To me, that’s one of the most dangerous things about it. As frightening as it is to think about a truck driver texting while barreling along the highway at top speed, what about one of our employees doing the same thing while they are operating a huge piece of equipment?

Just as various government organizations are considering banning this practice, maybe it’s time for industrial safety professionals to think about how the issue should be handled as well. Including a statement to that effect in your safety manual would be a good start, as would posting signage on the shop floor making the policy of “no texting at work” clear. And that should probably include making or taking cell phone calls, checking e-mail, or surfing the Internet on a handheld device while on the job. The problem there, of course, is the same one you’ll encounter on the road: people know better, but they do it anyway.

Maybe you can relate. There may have been a time or two when someone sent you a text or a photo while you were driving and you didn’t see the harm in taking a look, or perhaps in typing in a quick response—you know better, but you do it anyway. That in itself may be a good way to broach the subject. Call your people together to discuss the issue, and admit that you’re as tempted as anyone to turn your attention to that little gadget whenever it alerts you to an incoming message, and that’s fine when you’re not doing something that affects other people. But when you’re at work you have a responsibility to everyone around you to stay focused on the job at hand for reasons of productivity, and especially of safety. We all develop friendships in the workplace, and none of us wants to be responsible for creating hardships for others, especially if our actions could lead to someone else being injured. Sure, avoiding unsafe practices is part of any safety professional’s job, but nobody likes being told what to do. If you can apply reason, however, you might be able to get more people onboard.

There is a lot to be said for what these mobile devices have added to our lives, and even to our jobs. We can be more productive by being available no matter where we are, and whether that’s via phone call, e-mail, or text. You might be waiting on news regarding a sick relative from a member of your family, or information regarding an important contract from one of your clients, but that’s not always the case, as we all know. How many times have you overheard someone else’s cell phone conversation—which is pretty hard to avoid at times—only to realize that they’re not talking about much at all, just checking in? And since that’s the case so often, there’s really no way to justify such a call or text message in the middle of a work shift with machines pounding and blades spinning. And while it may seem like common sense for a person to avoid such a scenario, everyone needs a reminder not to make such mistakes from time to time. We all have a responsibility to make sure our actions don’t impact others in a negative way, but sometimes a little more is required to make sure that doesn’t happen. And even though there’s not much you can do when you encounter that driver who’s more interested in gazing into a tiny screen than operating their vehicle safely, you can do something about the actions of the employees who are in your charge. And you should. 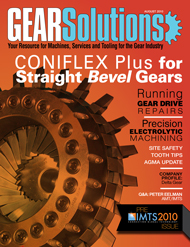