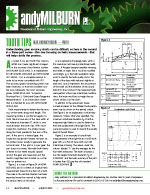 As noted in my last Tooth Tips column, AGMA has made significant changes in the accuracy classification system. ANSI/AGMA 2015-1-A01 is a replacement for ANSI/AGMA 2000-A88 and ANSI/AGMA ISO 1328-1. It is a complete revision in order to be more compatible with ISO.

The accuracy grade numbering system has been reversed, so that the smallest number now represents the most accurate grade. AGMA 915-1-A02 “Inspection Practices-Part 1: Cylindrical Gears-Tangential Measurements” is an information sheet that is intended for use with ANSI/AGMA 2015-1-A01.

Helix measurements determine the accuracy of the teeth along their length. The measuring probe is positioned against a tooth flank at one end of the face width at the tolerance diameter dT, which is one module below the tooth tips. With most inspection machines, the probe moves along the tooth parallel to the axis of the part. If the part is a helical gear, the inspection equipment rotates the part as the probe moves axially to generate the nominal helix. If the part is a spur gear, the part does not rotate. Normally both flanks of three to four teeth equally spaced around the gear are measured and the results magnified and charted on a strip chart or printed out.

Figure 1 is a copy of Figure 24 of AGMA 915-1-A02 and is a sketch of a typical helix measurement trace for one flank of a tooth. The scale in the vertical direction has been expanded more than normal to help clarify the various items on the chart.

Line 1 represents the design helix, which in this case does not have any intentional modifications. If the gear designer specifies crowning, end relief, or taper, line 1 would be modified accordingly. Lb is the helix evaluation range used to classify the helix quality and is the length of the face width reduced slightly at each end. Line 2 represents the actual trace of the tooth and the deviation of the actual helix from the nominal. If the measured helix were perfect without any intentional modifications, the trace would be a straight line as shown at line 1 on the chart.

In addition to the actual helix traces, numerical values for the different helix parameters may be shown on the printed output. See Figure 1 for an explanation of what they represent. Unless otherwise specified, the maximum total helix deviation Fb of all the measured right flanks is used to determine the helix quality level of the right flanks. The same procedure is used to classify the quality level of the left flanks.

Figure 2 is an example of actual helix measurements of the right flanks of a 65-tooth gear with a 4.75-inch face width and with intentional crowning. The values under the column labeled “A” are the averages for the four teeth measured. The tooth at space 1 has the largest total helix deviation Fb of 0.000159″ and the helix accuracy of the part is better than Q15 per the old standard AGMA 2000-A88.