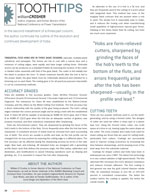 Tangential feed hobs are in three basic designs: pancake, multiple-spiral cylindrical, and pineapple. The former are low in cost with a narrow face and a minimum of cutting edges, wear rapidly, and have longer cutting times. Globoidal worms can be produced on a standard hobber by reversing the location of the cutter or bladed cutter assembly with that of the gear blank. The cutter is fed radially into the blank to produce the form. To obtain maximum benefit after the hob is fed to the proper depth, the gear blank must be rotationally advanced and retarded for a trimming cut on each flank. The mating gear is for all practical purposes impossible to cut by conventional methods.

Hobs are available in five accuracy grades: Class AA-Ultra Precision Ground; A-Precision Ground; B-Commercial Ground; C-Accurate Unground and; D-Commercial Unground. The tolerances for Class AA were established by the Barber-Colman Company, and the others by the Metal Cutting Tool Institute. The hob accuracy has a direct relationship with the quality of the gear being produced. The hob’s cutting edges maintain the correct pressure angle and lie along a helix with the established lead. A Class AA will be capable of producing an AGMA A5 (Q12) gear, and if Class B an AGMA A7 (Q10) gear when the hob has an adequate number of gashes, was properly mounted, and their tolerances maintained after sharpening.

Hobs are form-relieved cutters. They are sharpened by grinding the faces of the hob’s teeth to the bottom of the flute. Errors frequently arise after the hob has been sharpened. A consistent amount of metal must be removed from each succeeding row of teeth. The errors are usually in profile and lead, as the hob profile can be changed from its true position by exposing the cutting edge to a different plane. The hob accuracy can be affected during the sharpening process by errors in the rake angle, flute lead, and indexing. All standard hobs are designed with a generating profile (basic rack) that defines the pressure angle, the fillet radius, addendum and dedendum, and modifications to assist following operations such as shaving and grinding, etc. It is essential to inspect the hob after sharpening.

An alternate to the use of a hob is a fly tool, and they are frequently used in the cutting of a worm wheel with tangential feed. This method has none of the irregular flank contours that are present when a hob is used. The simple tool is reasonably easy to make, and it reduces the tooling cost when manufacturing small quantities of high-precision special gear forms. Hobbing is five times faster than fly cutting, but hobs are much more expensive.

There are two popular methods used to cut the teeth: generating, and by using a formed cutter. Two designs of cutter are used are either a rotary type or a planer type tool. Using the formed rotary cutter, one tooth space at a time is cut, leaving a gap the same shape as the cutter. The most complex and costly tools used for metal cutting are those that are used for cutting teeth, particularly form cutters. Coatings are successfully used to improve tooling economics by increasing the time between sharpenings, and by keeping most of the heat away from the substrate material.

Coatings for shaper cutters and hobs have been in widespread use since 1980. The latest hob technology is to use coated carbides or high-speed steels. The thin ultra-hard film increases the tool’s abrasion resistance and reduces tool-part adhesion. The first coating to find general use was the gold colored titanium nitride (TiN). An estimated increase in tool life of 200-300 percent is considered conservative. The better the surface before the coating is applied, the better the overall results.