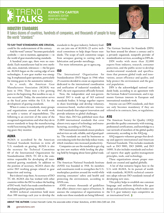 To say that standards are crucial could be the understatement of the century.

And the word “century” becomes particularly symbolic — not to mention, appropriate — in the world of gear-manufacturing standards.

A hundred years ago, there were no standards. Each manufacturer had its own methods, sizes, materials, tolerances — the list goes on. AGMA began on the cutting edge of new technologies. A new gear market was emerging. It emphasized quiet operation, particularly for timing gears in the automotive industry.

As a result, the American Gear Manufacturers Association (AGMA) was born in 1916. There were a few growing pains in the beginning. But needless to say, it was successful. Today, the association serves as the focal point within the U.S. for the development of gearing standards.

When it comes to standards, many groups and organizations around the world work to tackle a variety of responsibilities. The following is an overview of the some of the recognized organizations and what they do to ensure standards to keep the manufacturing world functioning like the properly performing gears they monitor.

AGMA is accredited by the American National Standards Institute to write all U.S. standards on gearing. AGMA is also the secretary for Technical Committee 60 of the International Organization for Standardization (ISO). TC 60 is the committee responsible for developing all international gearing standards. In addition to the position of secretary, AGMA chairs the active ISO working groups related to gear inspection and testing.

But it doesn’t stop there. As secretary of ISO TC 60, AGMA also has worked with other countries within the ISO to reduce the backlog of ISO work. And it has made contributions to developing global gearing standards.

AGMA technical committees hold more than 100 meetings each year to develop the standards in the gear industry. Industry leaders can join one of AGMA’s 23 active technical committees to help shape future standards. The scope of each committee ranges from aerospace gearing to cutting tools to lubrication and powder metallurgy.

For more information, go to agma.org.

The International Organization for Standardization (ISO) began in 1946 when 25 countries decided to create an organization dedicated to the international coordination and unification of industrial standards. In 1947, the new organization officially formed.

Now, the independent and non-governmental ISO is made up of 163 national standards bodies. It brings together experts to share knowledge and develop voluntary, consensus-based, market-relevant international standards that support innovation and provide solutions to global challenges.

Since then, ISO has published more than 21,000 international standards that cover almost every aspect of technology and manufacturing, according to ISO.org.

ISO international standards ensure products and services are safe, reliable, and of good quality. The standards are used by businesses as cost-reducing tools that also help reduce waste, which translates into increased productivity.

Companies can use the standards to get a leg up into new markets while leveling the playing field by bringing about fairer global trade.

The American National Standards Institute (ANSI) was founded in 1918. Its members and constituents work to strengthen the U.S. marketplace position around the world while assuring consumers’ safety and health and protecting the environment, according to ANSI.org.

ANSI oversees thousands of guidelines that affect almost every aspect of business. It assesses the competence of organizations to make sure those standards are being followed.

The German Institute for Standards (DIN) has been around for almost a century and is a privately organized, nonprofit provider of standardization services, according to DIN.de.

DIN works with more than 32,000 experts from industry, research, consumer protection, and the public sector to develop market-oriented standards and specifications that promote global trade and innovations, assure efficiency and quality, and help protect the environment and the general population.

Anyone can use DIN standards, and their use only becomes mandatory if they are referred to in contracts, laws, or regulations.

The American Society for Quality (ASQ) provides the quality community with training, professional certifications, and knowledge to a vast network of members of the global quality community, according to the ASQ.org.

ASQ supports volunteer groups that develop and approve international and American National Standards. This includes standards such as ISO 9001, ISO 26000, and ISO 14001. It also includes standards and technical reports that apply quality-management principles, tools, and technology.

These organizations ensure proper standards are created and applied globally.

A lot of that initiative begins here in the U.S. with AGMA. In its pursuit of worldwide standards, AGMA’s technical committees adopt relevant ISO standards instead of developing new ones.

This policy helps to establish one common language and uniform definition for gear design and manufacturing, which makes sure the U.S. gear industry stays competitive on an international level.