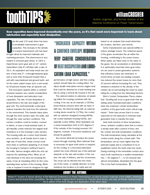 Over the past 100 years there has been a remarkable improvement in gear capacities. This increase in the density of a power transmission unit has been brought about by improved materials and machining precision. This phenomena is very evident in enclosed gear drives. In 1903 a David Brown worm gear unit on 14" centers transmitted 12hp @ 1450rpm with a ratio of 35/1. An equivalent unit today would use centers of less than 5". A through-hardened gear unit is more than 50-percent heavier than a unit with case-hardened and ground teeth, and for the same output torque such a unit would be 50-percent heavier than an epicyclic unit.

This increased capacity within a confined envelope requires very careful consideration of heat dissipation and lubrication load capacities. The rate of heat dissipation is proportional to the size and weight of the gear unit. The environmentally cooled gear reducer transfers the heat from the lubricant to the environment. This transfer takes place through the inner surface layer, the walls, and through the outer surface conditions. This surface condition could be heated, covered in debris, or have a heat-resistant paint. In all naturally cooled reducers the largest heat resistance is in the housing’s outer surface. The housing walls are a minor heat transference problem, as all metals tend to have a high rate of heat flow. Under normal conditions there is sufficient splashing of oil inside the housing to transport sufficient heat to the walls. Various designs within the unit can improve the splashing effect. When an oil mist develops in the area not receiving the spray, it has an insulating effect for the corresponding inner surface of the housing. When a fan is required it must be designed for high performance at high speed, and this cooling system should triple the cooling effect. Our latest stealth helicopters remove engine heat that could be detected by a heat seeking missile by using a vertical fan housed in the tail.

The optimal solution is extensive oil splashing within the housing combined with fan cooling. If we use as an example a 1500hp bevel/helical conveyor drive with an input of 985 rpm, the thermal rating with an external cooling device would be 1175hp, fan cooled with an optimum designed housing 860hp, fan cooled standard housing 520hp, and naturally cooled 365hp. Most standards set a sump temperature limit of 200 degrees F. If the outside of the housing exceeds 140 degrees, however, it becomes hazardous and should be guarded.

Any excess lubricant increases the power losses through churning. More lubricant than is necessary for gear tooth action is required for the cooling. In a force-feed lubrication system the most efficient use of the lubricant depends on the size and location of the nozzles, the rate of delivery, and the oil pressure. The oil jet can be directed into the mesh, out of the mesh, or radially directed. In most instances the location is by habit and not based on an analysis that would determine the location, direction, and velocity.

Some manufacturers use special baffles to reduce windage losses. The rotational speed of the gears accelerates the air within the housing, contributing to the power losses. When plates are fitted close to the sides of the gears, the air acceleration is diminished. It is particularly important when gear reducers are used in power generation systems that efficiency losses are minimized. In recent times at least one leading company has reduced the power losses by more than 20 percent without increasing the cost. They obtained a reduction in the density of the mixture air/oil surrounding the mesh by separating the cooling from the lubricating function.

Blok’s Contact Temperature Theory states that “Scuffing will occur in gear teeth that are sliding under boundary-lubricated conditions when the maximum contact temperature condition of the gear teeth reach critical magnitude.” Tests have proven that it is more important for the lubricant to minimize heat generation than to transfer the heat.

Gear teeth function in three temperature zones: ambient condition when first in motion; a steady state after a period of time; and the contact and bulk temperature conditions. The bulk temperature being calculated at the contact points along the contact path. This temperature can be much higher than the lubricant supply and is considered to be in equilibrium before the teeth enter the mesh. During meshing in the immediate contact area each tooth experiences a sudden temperature rise — 80 degrees F — is not unusual and, almost immediately, dissipated into the gear. This is the flash temperature. 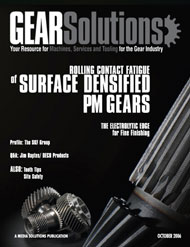