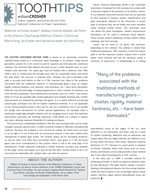 The Electric Discharge Method (EDM) is based on an electrically conductive material being eroded by a continuous spark discharge to its surface. Using special generators, pulsed DC or AC current is used to vaporize and melt away the conductive material. The electrode that delivers the heat can be a small diameter wire or a pre-shaped solid electrode. The spark gap must be flushed with a dielectric fluid. With EDM a wire is continuously fed through arms that are suspended above and below the gear blank. The process is relatively slow. However, the servo-controlled tooth path is accurate and relative to that of a CNC machine tool. Many of the problems associated with the traditional methods of manufacturing gears—such as chatter, rigidity, material hardness, tool selection, chip thickness, etc.—have been eliminated. EDM also has the advantage of being programmed so that a number of machines can work virtually unattended. Close dimensional accuracies such as 0.0001″ and surface finish of 16 µin are possible with careful application and multiple finishing cuts. Further improvements are obtained by running in the gears. It is a useful method for producing special gear prototypes but will not replace traditional methods. It is not applicable to the normal production gear. It also has its own set of problems, but it can simplify the design and manufacture for certain special applications. For example, when a particularly tough high-strength material such as maraging steel is used, the hardness specification precludes any finishing operations. EDM allows for a variety of shapes and sizes, allowing maximum flexability for making prototypes.

The process has considerable flexibility in that the sizes and geometry can be easily changed, whereas special hobs or cutters would be needed in alternate manufacturing methods. Because the material is not removed by cutting, the blank does not have to be as rigid. It is not at this time an economical method. It has been useful in the manufacture of plastic gear molds. The involute shape can be accurately produced, as can tip relief, root relief, and non-involute forms. Spur gears to 5 DP and bevel gears have been manufactured to this system, which is still in the early days of its development. Profile inspection indicated a similar tolerance accuracy was possible for the large coarse pitch gears as it was for the fine pitch. Surface finish of up to 16 micro-inch are attainable with multiple skim cuts with low powers.

Electro Chemical Machining (ECM) is the controlled dissolution of material from the workpiece by contact with a chemical reagent in the presence of an electric current. It is a relatively stress-free process that can be improved by shot peening to improve surface imperfections and grain boundaries affected by the chemicals. A recast layer is produced that can be brittle and notch sensitive under residual tensile stress. The chemicals used can attack the grain boundaries. Surface improvement techniques can be used to eliminate these defects. These include surface hardening, honing, surface rolling, polishing, and shot peening.

Lasers can be used to cut gears with precision, depending on the material. The method is slower than traditional techniques. CNC machines control the laser’s path to cut the maximum number of gears from a metal sheet. Once checked and set the operation needs a minimum of supervision. A disadvantage is in having heat-affected zones at the edges of the cut. Heat distortion is not eliminated, and there may be a need for further machining.  Materials such as aluminum and copper alloys that are highly reflective are difficult to cut, as they affect the focus of the beam. Maximum material thickness is 0.75″ because too much power is required for thicker materials. Most tooth forms such as worm, bevels, and helicals can be produced with a laser method due to the latest developments in CNC controls.

In the early part of 1980 a versatile method for producing prototype or small run gears by abrasive water jet was introduced. The water stream creates a vacuum, drawing a finely grained abrasive into the mixing chamber. Unlike the laser method, it can cut through stacks of gear blanks. Burr-free edges without heat-affected zones are produced.