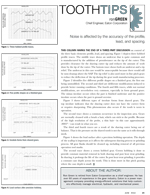 This column marks the end of a three-part discussion on control of the three basic elements: profile, lead, and spacing. Figure 1 depicts three hobbed profile traces. The middle trace shows an undercut that is quite common and is manufactured by the addition of protuberance on the tip of the cutter. This provides clearance for the shaving cutter tip and reduces the amount of work done by the tip of the cutter. The bottom trace shows both an undercut and a tip relief. The undercut in this case would be unacceptable because there would still be non-cleanup above the SAP. The tip relief is also used more in fine pitch gears to reduce the deflection of the tip during the gear tooth manufacturing processes.

Figure 2 identifies five different profile shapes on a finished gear, the first one being unmodified. The second and third are deliberate modifications induced to provide better running conditions. The fourth and fifth traces, while not normal modifications, are nevertheless very common, especially in form ground gears. The minus involute occurs when the part is finished undersize and the positive involute occurs when the part is ground oversize.

Figure 3 shows different types of involute forms from shaved gears. The top involute indicates that the shaving cutter does not have the correct form or requires sharpening. This phenomenon also occurs if the tooth is worn in operation.

The second trace shows a common occurrence in the inspection area. Gears are normally cleaned with a brush a hair, which can stick to the profile. Because of the high resolution of the probe, a thin hair—in this case approximately .0005″—can result in what you see.

The third and fourth traces are a result of the shaving cutter being out of balance. That is the pressure on the shaved tooth is not the same as it rolls through mesh.

Figure 4 shows the lead surface after a precision hobbing operation. The depth of the scallop is important as it affects the subsequent shaving process or grinding process. All gear flanks should be cleaned up, including removal of all previous operation tool marks.