If you still are digesting the acronyms in my April 2019 column, I apologize. As mentioned in that article, without a proper understanding of the terminology, you are at a great disadvantage. In the previous article, I detailed the proper terminology for spur gearing. This article hopefully will broaden your knowledge of bevel gear terminology.

The fundamental term in metric gearing is the designation of pitch. This is called the module and is detailed as m. Other key values are the pressure angle (α), the shaft angle (S), and the number of teeth (z). These are the core values that drive the geometry of the gear. 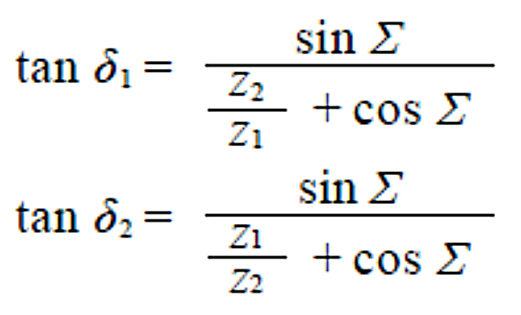 With bevel gearing, the reference diameter (d) is also known as the pitch diameter. The formulas for these values are:

The cone distance (R) is a critical mounting dimension of bevel gearing as it defines the linear distance between the reference points of the intersections of the reference diameters (Figure 2). It has a formula of:

The addendum of each gear is calculated as:

The dedendum of each gear is calculated as:

With these two values, we can calculate the tTip diameters (da), also known as the outside diameter. These are derived from:

Another important value in bevel gearing is the pitch apex to Crown (X). This value is critical when adjusting the gear for backlash. It is calculated as:

The axial face width (Xb) is calculated as:

The addendum angle (Qa) is calculated as:

The tip angle (da) is calculated as:

The dedendum angle (Q f ) is defined as :

The bore is the hole into which the motor shaft is inserted. For some gears, the gear is already mounted on a shaft and thus the need to specify the bore does not exist.

The hub diameter is the outermost diameter of the boss that projects out of one or more sides of the gear. It usually functions as a shoulder to which the bearings are matched to. Its relative, the hub projection, is the distance from which this diameter projects from the heel face of the gear.

The face width (b) is the distance across the gear teeth in the direction perpendicular to the reference diameter. The face width of a bevel gear is not a set value. It is recommended that the value be at a minimum
10 ∗ m, and R/3 as a maximum value.

The keyway width is the value of the horizontal portion if the slot is in the bore. The distance that this slot projects out of the bore, toward the root diameter, is the keyway depth. Not all gears are produced with a key slot, so these dimensions are not always present.

These terms apply to all bevel gears, but there are additional terms that apply when the gear set is produced as a spiral bevel gear set. These gears have a curved tooth that is set at a specific spiral angle.

This angle is most commonly set to 35 degrees. For spiral bevel gears, one gear will have teeth with a left-hand spiral, and the mating gear will have teeth with a right-hand spiral. The choice of which gear has the left-hand spiral is dependent only on the orientation of your bearings and the rotation direction of the motor shaft. As most applications are bi-directional, there is no preferred standard. Stock gearing usually has left-handed pinions and right-handed bevel gears.

Hopefully, armed with this knowledge, you will be better able to communicate your bevel gear requirements with your gear supplier, and you won’t have to worry about being lost in the weeds.

Cycloidal teeth must not only be accurately spaced and shaped; their wheel centers must be fixed with equal care