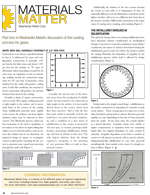 White Iron will Normally Contract at 1/4” per Foot.

Contraction is not always equi-dimensional, in that it is influenced by mass and configuration. Contraction is normally 1/8” per foot for the flake irons, and about 1/10” per foot for the nodular or “S” types of Meehanite unless annealing is resorted to. In such cases, an expansion occurs on annealing, making overall size contraction range from 0-1/16” per foot. Contraction, when hindered by the mold, will produce casting stress. Under like conditions, the material of lowest contraction will produce the greatest freedom from stress in the castings.

Consider a shape of square cross-section, such as a cube. Here again, cooling proceeds at right angles to the surface, and is necessarily faster at the corners of the casting. Thus, solidification proceeds more rapidly at the corners. In ordinary cast irons, higher hardness values may be expected at these corners. The Meehanite process, which utilizes nucleation of the melt to graphitize, is less subject to the effects of rapid chilling that might occur at external surfaces, such as corners, that radiate heat in two directions. An improved design of square or rectangular corners would involve rounding off the corners to promote more equal heat extraction through the mold wall (Figure 1).

Consider the special case of the internal corner form the standpoint of solidification. As heat transfer is in a direction at right angles to the surface, it is necessarily slowed down at the corner, where heat flow lines intersect. Add to this the fact that sand, which is normally used for the mold has a very poor thermal conductivity, and a condition of a slow down of solidification at this corner, is promoted. The hot spot, so created, prolongs solidification, promoting solidification shrinkage and lack of density in this area. The only logical solution, from the design engineer’s viewpoint, is the provision of very generous fillets or radii at these internal corners.

Additionally, the relation of the two sections forming the corner to each other is of importance. If they are materially different, as in the illustration, contraction in the lighter member will occur at a different time from that in the heavier member. Differential contraction is the major cause of casting stress, warping, and cracking (Figure 2).

The Metallurgy Involved in Solidification

Going back to the simple round shape – solidification at the surface commences by deposition of austenite crystals at the surface.   These crystals grow in a pine tree or dendritic formation and growth in a linear direction proceeds rapidly, at a rate depending on the rate of heat extraction from the mold.  At the same time, the crystals thicken in a lateral direction.  Graphite, being more soluble at higher temperatures, is deposited from the remaining liquid after the original deposition of some crystals fo austenite.  Graphite deposition occurs from a number of centres or cells, known as eutectic cells or eutectic colonies.

Diagrammatically, solidification of  cast  iron  proceeds  metallurgically  from outside to the centre of a simple section as follows (Figure 4).