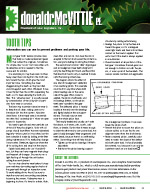 Most gear tooth failures provide clues that help us make replacement gears that outlast the originals. Sometimes it’s simple, like “no oil,” but more often a little detective work is needed to find the cause and its solution.

One example you may have seen involves heavy wear lines running from the tooth centers toward the tips, which give the most important clue. Something has been dragged along the teeth as they’ve rolled and slid against each other. Whatever it was, it was thicker than the oil film separating the teeth, so it’s been abrading the tooth profiles. This “abrasive wear” is usually caused by contamination of the oil by dirt or particles from wear or corrosion.

The best way to prevent abrasive wear is to keep the oil clean, taking care not to introduce dirt into the system. Absolute cleanliness in the repair area is essential: we often find “assembly dirt” when we open boxes for inspection.

You need to get dirt and wear particles out of the oil if they should get in. Units with oil pumps should have filters that are maintained regularly–twice a year isn’t too often, but the best schedule is made by looking at the filter during maintenance. If it’s really dirty, change it more often. Better yet, figure out where the dirt’s coming from and stop it at the source.

Splash lubricated units can’t handle filters, but they can have magnetic drain plugs and frequent oil changes. Be sure to run a light flushing oil through the unit before adding the new lubricant.

You can stop abrasive wear before it stops your machinery by making regular checks of the gear teeth through an inspection cover. To avoid adding dirt to the oil, be sure to wipe the cover and surrounding area before loosening the screws. If abrasive wear is beginning to show, it’s time for a drain, flush, clean filter, and new oil. Then have the old oil analyzed to find out what caused the contamination, and you’re halfway to solving the problem.

The second most common “killer” of good gear sets is misalignment. Gear teeth simply won’t carry the load if they don’t touch, and the portion that does touch has to carry an overload to make up for the missing contact area.

The diagram shows the effect of one kind of misalignment: deflection of an overhung pinion. This example could be from any drive where both pinion bearings are on the same side of the gear. When power is applied, the pinion shaft bends and its bearings deflect, so the pinion teeth aren’t parallel to the gear teeth. The deflected pinion is heavily loaded at the end near the bearings and lightly loaded at the unsupported end. The load may not even cover the whole pinion face.

The heavily loaded end usually can’t take the abuse, so it wears, pits, scuffs, cold-flows, or breaks. By the time it wears enough to allow the other end to carry some load, the gear is badly damaged. Wear progresses until teeth break, because there’s no self-healing effect. Some things that will help include:

• Tighten up the pinion bearings if they’re adjustable.

• Realign the pinion to tip the free end toward the gear, so it’s misaligned under light loads and beds into full-face contact as the load is applied. This works best if the load is always applied in one direction.

• Check backlash at all positions of the bull gear. Sometimes the bull gear runs out enough to bottom out with the pinion, or uses up all of the backlash. This causes severe overload and aggravates the misalignment problem; it can even break the pinion shaft.

• Rework the drive to mount the pinion on a loose spline, so it can find its own alignment even when the shaft bends.

• Make a tapered pinion, carefully calculated to match the slope of the deflected shaft under load. It should probably be crowned, too, because it can only be a perfect match at one load level. 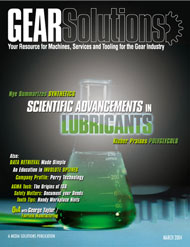