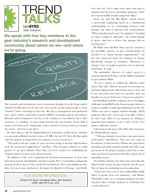 The research and development team is sometimes thought of as the bespectacled, wild-haired folks down in the lab who come up for air just long enough to shout “Eureka!” before returning to their hole. But just as management and production have a place within a particular company, R&D is an integral part of our industry. Research and development is the key to the evolution of any industry, but it takes resources—i.e. funding—to push things forward. For this month’s Trend Talk, I spoke to four men on the cutting edge of gear research to find out what’s just around the corner—and how to get there. Figure 1

Dr. Suren Rao is with the Applied Research Laboratory at Penn State, classified as a university affiliated research center, or UARC, for the U.S. Navy. Dr. Rao spoke with Gear Solutions at length about the industry’s recent research foci.

“The push in the last couple of years has been trying to develop high-hardness steels for aircraft gear applications,” said Rao. “The aerospace industry is a solid sponsor of the gear industry. Penn State has been involved in establishing the ‘designer labels’ for these more advanced steels.

“In addition to this, we're comparing the frictional characteristics of gears that have been ground, superfinished, and then coated. We're researching coatings that prolong the life of gears if they accidently lose lubricant. We’re also looking at other alloys (for use in gear production), developed by Questek in Chicago—specifically C64 and C61. We’ve taken these alloys and tried to optimize their heat treat and fatigue properties. There are some incredible benefits using those alloys.”

Down the hall, Dr. Bill Mark's current interest is gear-health monitoring, based on a fundamental understanding of the relationship between tooth damage and what is detected with accelerometers.  “What is fundamental to me,” he explained, “is looking at what is going on physically—the actual damage of gears—and how to detect that damage with an accelerometer.”

Dr. Mark, also with Penn State, says he’s amazed at the incredible accuracy of gear manufacturing—he describes it as “almost beyond comprehension”—but he’s also concerned about the resistance to change. Specifically, changes in standards. “Resistance to change is true of people in general, even in electronic technology,” he said.

The undeniable efficiency of today’s gears is a common thread in Dr. Rao’s and Dr. Mark’s assessment of gear industry R&D.

“It’s not a matter of making the efficiency much better,” Rao said. “Most of the gears we encounter are extremely high-precision. But friction turns to heat, and if you can reduce heat losses in a gearbox, there are benefits you can get from even a 10 percent reduction.”

In both Mark's and Rao’s opinion, one of the biggest challenges facing R&D in the American gear industry is trying to establish a stable base funding here in the U.S. “When you want to support students through a Ph.D. program,” Rao said, “you’ve got to be able to fund it for three years. Most of our sponsors are looking at programs that terminate in six to eight months. That makes it difficult to attract.”

A few hours to the west at The Ohio State University, Dr. Donald Houser agrees.

“(The gear industry) has to have some government involvement,” said Houser. “You can’t just count on the industry to fund research. Without the government matching your funds somehow, people don’t like to just put money in the projects, paying a university or some other overhead. It just doesn’t look like a good way of expending money.”

Nevertheless, Houser says, there have been big time efforts in this country for gear research over the years. One of them was predicting heat treat distortion.

“There have been two or three multi-million dollar efforts to predict heat treat distortion,” said Houser. “Ironically, I don’t see a computer program out there anywhere that is being marketed as predicting heat treating distortion.”

“American gear companies are also getting excited about wind turbines,” said Houser. “There’s been a technical report that the Germans would like turn into a standard, called 15144. We’re doing a little bit of work with AGMA to try and understand that standard and see if it makes sense.”

Down south in Oak Ridge, Tenn., Oak Ridge Metrology serves as of the National Nuclear Security Administration's Y‑12 National Security Complex, a resource to the National Institute of Standards and Technology that provides calibration services. In the early 1990s, Bruce Cox was the technical manager of Oak Ridge.

“I came in specifically to work on gear projects,” said Cox. “I retired from there in 2012, and I now have a company called Bruce Cox Engineering Corporation. I perform assessments of calibration laboratories.”

Cox recently took a trip to Oak Ridge, where he got to see some new “toys” they’ve been installing, including a new temperature calibration laboratory. They’ve also installed optical measuring machine from Hexagon metrology to be used for fine pitch gearing or anything that requires non-contact analysis.

Metallurgists there decided to expand the machines' capabilities to include not just dimensional measurement, but also physical and electrical measurements. “It’s a light projector like a light optical measurement machine,” Cox explained. “It works very well for spur gears, so you can make a very high-density measurement of spur gears and fine pitch gears.

Oak Ridge had a project with Penn State, AGMA, ASME, Y12, and NEST, trying to reestablish tracability with measurements in the U.S. After that project, we had the capabilities to do all the tracability for cylindrical type gears—any involute type gears.”

Suren Rao says his team dabbled in non-contact analysis, and while it was faster, “we were not able to solve the issue of accuracy. We still use contact-type probes for gear inspection. Non-contact is, however, much faster. It takes the snapshot of the whole flank of the gear tooth, rather than measuring one line at a time, like the contact probe does.”

Different ideas, one goal: to make gears last longer and perform better in their respective applications. To do so requires a degree of resources that seems to be eluding the gear industry. One thing is for sure, though: whether the funding is abundant or scarce, the drive to compete on an international scale will continue to define the American Gear Industry.