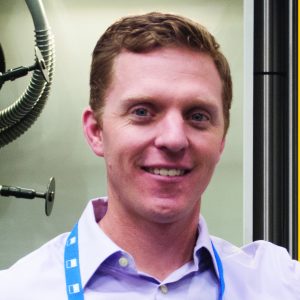 James Engineering specializes in deburring machines. A number of gear manufacturers are still hand deburring their products, aren’t they?

Why are people holding on to this hand-held technology?

Well, business is a gamble, right? They have a process that already works, so spending money to eliminate it and jumping into a new market seems risky.

But these manual operators can incur a lot of money. Injury is a big issue. If an operator calls in sick, you’re really in trouble. You can’t really place an ad for these hand-deburring specialists—it takes a lot of training to file one tooth out of 100 without nicking another. If the flank on either side of the tooth is scratched, the gear is essentially scrapped.

So they’re not easy to come by, and once you have someone like that, it’s easy to overlook the mechanized solutions. But many of our customers want to do more with what they already have.

You have a range of systems. Tell our readers about them.

Our entry-level deburring systems are our manual systems. The operator manually loads and unloads the parts and simply hit “cycle start” on those systems. The setup times on those systems are about 10 minutes. Unfortunately, with the manual system, it takes an average of three tries to get the setup correct. According to our own 2011 survey, we’re seeing many of our own customers average between 30 and 90 minutes to set a single part up for each batch. There are companies that average better, but when you get down to the details of it, it’s really difficult to nail that first setup on the very first try.

Then we go into our zero setup systems, which, as the name depicts, doesn’t have any setup time. The user simply calls up the proper program, select it, hit “cycle start,” and the machine changes from one setup to another in a fraction of a second. This method is gaining a lot of popularity these days.

The manual system itself is a pretty high-level solution, but we’re going a step further with a machine that doesn’t require manual setup. It’s a market that people don’t fully understand yet, but once they do, we’ll be looking back on the manual deburring systems as the “ice age.” We’ve developed an automated deburring machine called the MaxSystem, taking the process beyond even manual deburring. In 2014, we’ll have a new 7-axis system. It will allow you to accept a gear on a stationary pedestal inside the machine—no rotary table, you can just set the gear down—and our 7-axis max system will actually orbit the gear, staying concentric at 90 degrees to the gear. Without having a rotary table, it simply runs around the part and deburs it.

It sounds impressive, but is it entirely functional?

Not for every part. With certain gears—such as cluster gears—you need one grinding wheel for each side of the gear teeth. That means four tools to debur a two-gear shaft. With the MaxSystem, one tool hits the top side of the first gear, moves down and hits the bottom side of the gear, then repeats the process on the second gear. You can do with one tool what it took four tools to perform in a manual system.

The training on these manual deburring machines can be up to two weeks. The MaxSystem addresses that head-on: Taking companies from being operator-dependent to no longer operator dependent. Our vision is if Joe Blow calls in sick today, that’s fine, go pull that guy off the floor and tell him to select the correct part number and press start. That’s how simple they are.

Many people ask, “Why can’t you just take a Haas and throw an abrasive in it?” That’s a great question, because the Haas is quite cheap. What happens when you put the abrasives in the Haas is the abrasive gets down in the way and slides, always below the perishable tool. That abrasive then works between the metal dust covers and gets into the rubber seal. Once it impregnates that rubber seal, you have sandpaper. Our company owns a patent on putting all of these important things on the roof of the machine, which gives the operator an absolutely clean work environment.