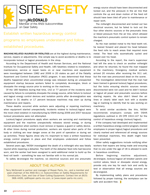 Machine-related injuries or fatalities are at the highest during maintenance, service, repairs or adjustments. One simple way to avoid accidents or deaths is to incorporate lockout or tagout procedures in the shop.

According to the Department of Health and Human Services, and the National Institute for Occupational Safety and Health, 185 fatalities related to installation, maintenance, service or repair tasks on or near machines and equipment were investigated between 1982 and 2006 in 20 states as part of the Fatality Assement and Control Evaluation (FACE) program. It was determined that these deaths happened when uncontrolled energy was released during an unexpected equipment startup because workers failed to completely de-energize, block or dissipate the energy source prior to working on the machines.

Of the 185 fatalities during that time, 142 or 77 percent of the incidents were caused by failure to completely dissipate the energy source, while failure to lockout and tagout energy control devices and isolation points after de-energization was a factor in 31 deaths or 17 percent because machines may start up during maintenance and repairs.

These deaths occurred while workers were adjusting or repairing machinery when equipment started unexpectedly. Incidents related to lockout/tagout were the most cited violation in manufacturing by OSHA during 2006 and 2007 because lockout procedures were not attempted.

Lockout/tagout procedures apply when workers are servicing and maintaining equipment and the machine unexpectedly releases stored energy, or during normal production when workers must remove or bypass a guard or safety device. At other times during normal production, workers are injured when parts of the body or clothing are near danger zones at the point of operation or during set up activities. These figures show why it’s important to have a written hazardous energy control program in place and that employees understand and follow established procedures.

Several years ago, NIOSH investigated the death of a millwright who was fatally injured while repairing a debarker. The teeth of the debarker feed rolls had become worn, and the worker had been assigned to weld additional metal to build up the feed roll teeth – something he was not familiar with in his normal job.

To safely de-energize the machine, six electrical sources and one pneumatic energy source should have been disconnected and locked out, and the pressure in the air line that controls the up and down motion of the feed roll should have been bled off prior to maintenance or repair work.

The millwright disconnected and locked out two electrical sources, but he failed to lock out the four other electric sources or the pneumatic lines or bleed pressure from the air line, which allowed the machine’s pneumatic control system to remain charged.

As the man welded metal to the feed teeth roll, he leaned forward and placed his head between the feed rolls to reach areas that required more metal. The feed rolls auomatically cycled and closed over his head.

According to the report, the man’s supervisor had left the area to check on another millwright and when he returned, he found the man trapped in the machinery. Emergency medical workers arrived 20 minutes after receiving the 911 call, but the man was pronounced dead on the scene.

The investigation determined that the man had been trained in general lockout/tagout procedures, but the locks ensuring electric sources remain disconnected were not used and he didn’t lockout or tagout all power and pneumatic sources before starting repairs. He also didn’t bleed the air lines or clearly label each lock with a durable tag or marking to identify that he was working on machinery.

To avoid similar accidents like this, NIOSH recommends employers comply with OSHA regulations outlined in 29 CFR 1910.147 for the control of hazardous energy (lockout/tagout).

If the company had developed and implemented a written hazardous energy control program, trained employees in proper logout/tagout procedures and clearly marked and referenced all energy sources for individual machines, this death might have been prevented.

Other safety suggestions include notifying other workers that repairs are being made and ensuring that no one under the age of 18 is allowed to work in hazardous conditions.
Before beginning machine adjustment, de-energize, lockout/tagout all breaker panels and control valves, block or dissipate stored energy, provide only one key for each lock and verify by test or observation that all energy sources are de-energized.

By implementing safety plans and procedures followed by proper training, the workplace can be safe and accident free.

Orders increase for pusher furnaces for those planning to employ oil...