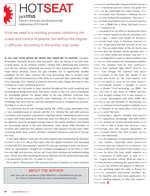 In the last four weeks my work has taken me to Austria, Slovakia, Wiesbaden, Germany, Russia, and Cincinnati, Ohio, all having to do with heat-treating gears. In my October column I stated that carburizing and induction were the two primary competing processes for case hardening gears. I didn’t forget about nitriding. Gears are gas nitrided, but in significantly smaller quantities for two main reasons: the long processing time to achieve case strength, and inconsistencies in the white or compound layer especially in high alloy materials. But I believe a long-lost discovery may change the way we view nitriding as a case hardening process.

I’ve been very fortunate to have traveled throughout the world analyzing and developing all things heat treat, and when I return to the U.S. and contemplate the knowledge gained I’m always taken by the way different countries view the heat treating process, primarily case hardening. It’s not the science of metallurgy, but more how we view the equipment used to complete the process. Nitriding is a case in point.

The historical record has nitriding during the 1920s being developed more or less simultaneously in Europe and the U.S. Initially the salt bath process found favor until machine components requiring surface hardening became more complex, with holes getting so small they were too difficult to clean. Eventually the gaseous process emerged solving many of the earlier problems, but lacked the processing speed of the salt alternative. Enter about 1980 Klockner of Germany who perfected the plasma process that reduced process time while enhancing white layer control. Klockner installed numerous systems in Europe and Asia.

In the early eighties I was part of a team tasked with transferring the Klockner process to the U.S. About that same time the digital revolution was sweeping America with PLC development, and the PC was just starting to enter our lexicon. “What an opportunity!” thought our company management at the time to offer this new high tech process, but we can’t keep their existing and outdated analog logic. Those and other resulting decisions affected how the plasma process was to be perceived in the U.S. for years to come.

We’ve got to “Americanize” this process because it requires too much operator interaction, and that didn’t square with the changing trend in heat-treat process control. Our goals were noble but we overlooked two major issues. First, we overlooked how Klockner’s thinking process defined and evolved the equipment. Second, as it was similarly described to me in a recent meeting, don’t turn a BMW into a Chevy. But that’s exactly what I wanted to do.

In preparation for my effort to develop the digital process control system for the arc-counting power supply logic, I spent four weeks at Klockner’s commercial heat treat in Germany learning the process. It was there that the enormity of our task hit me: This so-called state of the art technology required that the German nitride operator had to cover his entire head and furnace view port in a black photographer’s cape to shield ambient light so that he could analyze the temperature gradient within the complex load he had constructed. Absent from ambient light 950°F [510°C] has color. Even though the operator had placed thermocouples in the load, the variant of part spacing and holes as the load heated could cause hot spots to occur at too many locations to electronically monitor. I thought to myself, “this is Model-T Ford technology, not BMW.” But this was how it was done in 1980s Germany, and they thought nothing of it. It was required for the process. Automakers and other OEMs were starting to see the benefits of outsourcing heat treat, so commercial heat treaters suddenly arose as the recipient of our sales effort. How was that going to work? Not well.

Constructing a plasma nitriding load requires specific experience, knowledge, and skill, neither of which existed at commercial heat treats at the time. Add to that a brand new process control methodology and new vacuum equipment. We were doomed before the first circular vacuum vessel was fabricated.

Gears are expensive to manufacture and difficult to case harden, especially when distortional tolerances must be reduced to a minimum. Gas nitriding is effective, but when tooth contact loads increase so does the case depth required, and the composition of white layer or lack of it to fight fatigue becomes critical. What we need is a nitriding process combining the speed and control of plasma, but without the degree of difficulty. A process operating under the radar in Russia that enhances ammonia, discovered decades ago, has the benefits and even more application than plasma nitriding appears to offer that solution… stay tuned.

The basics of magnetic particle inspection