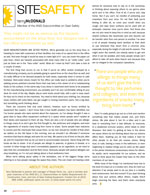 Gear manufacturers are active people. We’re generally out on the shop floor, or traveling to meet with customers at their facilities, but many of us spend time in the office as well. And even though it would be easy to make light of it—you can insert the paper cut joke here—there are hazards associated with what many refer to as “white collar” work just as there are in the “blue collar” world. What do I mean by that? Let’s take a look at a couple of areas.

The first thing that occurs to me is that if you’re an office worker employed by a manufacturing company, you’re probably going to spend time on the shop floor as well, and it’s really difficult to be dressed properly for both areas, especially when it comes to safe footwear. Slick-soled shoes meant for the office can really lead to problems when you’re walking across polished concrete floors that may have a thin sheen of oil or metalworking fluids on the surface. In the same way, if you dress in steel-toed work boots to be prepared for the manufacturing environment, you probably won’t be very comfortable sitting at your desk for most of the day. Maybe slip-on work boots would help, with a pair in easy reach for trips out to check on the machines. You need to think about your clothing, too, because loose clothes with extra fabric can get caught in moving machinery parts. Not a big deal, but something worth thinking about.

There are concerns that only exist indoors, however, such as fumes emitted by equipment like copiers. I don’t know that a true health problem has been identified, but I’ve known people who were worried about the exposure, so I’ve always thought it was a good idea to keep office equipment confined to a space where people aren’t seated at their desks and exposed to them all day. There are also a lot of people who are allergic to things many of us don’t give the first thought to, like perfumes and colognes, and even the ingredients of snacks many bring from home to share. Some people have reactions to scents and the chemicals that cause them, so we men should be mindful of that when we slather on the Old Spice in the morning, and we shouldn’t be offended if someone mentions that they’re allergic and asks for our help. We spend a lot of time on the job, after all, and it’s important that we do our best to accommodate everyone. Same thing with the foods we like to share. A lot of people are allergic to peanuts, or glutens in breads, or a number of other things that aren’t immediately apparent as an ingredient, so we need to take that into consideration and let them know. Seriously, people with peanut allergies can stop breathing, so I’m not just talking about a food preference here.

When we’re talking about safety in the workplace, one of the biggest things we’re referring to is how people manage the space they share. This can mean not leaving a slick behind for someone else to slip on in the workshop, or thinking about exposing others to our germs when we’re sick in the office. First of all, if you’re sick, stay home. But if you can’t, be mindful of protecting your coworkers from your virus. It’s not their fault you’re feeling ill, after all, so cover your mouth when you cough, and wipe down surfaces you’ve used with an antiseptic cleanser once you’re done. And those who are not sick need to keep this in mind as well, because shared surfaces like doorknobs and sink faucets can be transfer sites from one person to another. I’ve seen a lot of people keeping hand sanitizer at their desk to use whenever they return from a common area, especially during the height of cold and flu season. This might seem like overkill, but nobody wants to get sick when it can be avoided, and many people simply can’t afford to take off work when they’re sick because they are so integral to the company’s operations.

Now I’m really going to go out on a limb and mention something else that makes people sick, and that’s stress. We joke about it, but it’s a killer, and it can lead to everything from a bad attitude, to insomnia, to a weakened immune system, which leads to other illnesses. And what I’m getting at here is the stress we cause others by not thinking about how our actions affect them. Anything you do that makes it hard for other people to do their job causes stress. Being loud, or rude, leaving a mess in the bathroom, or even neglecting to replace things you’ve used up like paper in the printer introduces unnecessary stress for others. As adults, we’re responsible for our actions, and we need to think about the impact they have on the other members of our team.

While none of the things I’ve mentioned here rise to the level of a bad cut or a broken arm, they do merit our attention if we simply want to do our jobs in a healthy work environment. And who knows? If you start thinking about how your actions affect others, maybe they’ll begin returning the favor, and that’s when everybody wins.