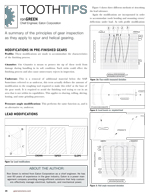 Profile: These modifications are made to accommodate the characteristics of the finishing process. (Figure 1a)

Chamfer: The Chamfer is meant to protect the tip of these teeth from damage during handling in its soft condition. Such nicks could effect the finishing process and also cause unnecessary rejects in inspection. (Figure 1b)

Undercut: This is a removal of additional material below the SAP. Sometimes referred to as undercut, this term actually defines the amount of modification to the roughing tool required to make this relief at the base of the gear tooth. It is required to avoid the finishing tool trying to cut in an area that is not within its capabilities. This applies to shaving, rolling, skiving, honing, and some grinding processes. (Figure 2)

Pressure angle modification: This performs the same function as, and is an alternative to, undercut. (Figure 3)

Again the modifications are incorporated in order to accommodate tooth bending and mounting errors/deflections under load. As with profile modifications  these allowable limits may be described by a K-chart or similar band-type tolerance system. Also notes should be added in respect to holes and other conditions.

In pre-finished helical gears it is normal to modify the lead only to accommodate the change in actual lead (lead angle), which will be caused by heat treatment. The tendency is for the helix angle to unwind in the heat and this means an increase in the lead as a measured dimension and a decrease in the lead angle. In some cases the design of the blank will cause a taper to be induced in the gear during heat treatment. This will also be interpreted as a lead modification but in this case it will be a plus condition on one side of the tooth and a minus condition on the opposite side. (Figure 5)

All other modifications are generally carried out in the finishing process.

Viscosity and the viscosity index