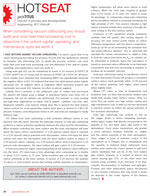 I have nothing against vacuum carburizing, I’ve spent a good deal of my career developing and selling the process, it’s just that few applications demand its benefits, like eliminating IGO. To justify the process, however, one must audit their post heat treat processing cost and determine if the upfront capital, operating, and maintenance costs are worth it.

Using endo gas IGO can be maintained at levels of 10 microns [0.0004”] @ 1,700°F (926°C) for 4.5 hours and 20 microns (0.0008”) @ 1,700°F for 38 hours. Some studies have indicated that eliminating NMTP can substantially eliminate the negative affect of IGO. It’s believed that when the slack quench phase bainite surrounds IGO, its negative effect is magnified. When quenched properly and martensite surrounds IGO, however, its effect is almost negated.

Carbide (Fe3C) networks in the carburized case no matter how successful the quench will always pose a danger of premature failure even when LPC is employed. But not all carbides are detrimental. For example, in some bearing and high wear applications so-called “salt & pepper” carbides — very fine, well-dispersed carbides — can improve sliding wear. But in general the final surface carbon content for most automotive related drive gears is limited to 0.80-0.90 percent. However, controlling these levels in LPC and endo are managed in totally different ways.

In both processes the higher carburizing potential will enhance carbon diffusion into the steel. LPC does have a time advantage when carburizing up to depths of about 0.070 inches (1.75 mm). Since acetylene gas can produce very high carbon potentials at the steel surface, in excess of 2.00 percent, the quantity of carbon in solid solution versus that forming carbide depends on temperature; higher temperature will allow more carbon in solid solution. When the total case required is greater than 0.070 inches (1.75 mm), LPC starts to loose its advantage. To compensate using endo carburizing the boost/diffuse method is employed simulating the high potential of LPC. This practice includes a high carbon potential initially then reducing it through the cycle ending in the final surface carbon.

Producers of LPC equipment provide simulation software that will predict with varying degrees of accuracy the case carbon profile based on carbon diffusivity, temperature, and the steel’s composition. Some go as far as recommending the acetylene flow and pulse/diffusion duration. One in particular will calculate the carbon concentration vs. depth in order to limit the carbon just below the Acm so carbide can be eliminated or reduced. Since this calculation is based on assumed carbon diffusivity for an ideal alloy composition trial and error processing is required to produce an acceptable outcome.

Endo gas carburizing relying on equilibrium control in a well maintained furnace will produce a consistent surface carbon result generally within +0.05 percent of the carbon potential, with higher nickel based alloys slightly lower.

Where LPC relies on time at temperature and acetylene flow: too little flow produces shallow case depth with usually lower surface carbon, while too much flow can cause very high surface carbon and high maintenance cost. To date no one has developed a real-time sensor to reflect the actual potential of the acetylene atmosphere.

Endo gas carburizing has evolved to rely on the oxygen probe: a device measuring parts-per-million (ppm) oxygen that directly corresponds to the quantity of CO2 and water vapor (dew point) in the atmosphere. Every probe manufacture will provide a cross reference between millivolts vs. oxygen and the carbon potential of the endo atmosphere. Trace oxygen is used in real-time control of the atmosphere as it changes due to temperature and the quantity of material being carburized; more surface area causes the control system to add more carbon (methane) that can be in the form natural gas, butane, propane, or a mixture of almost any carbon bearing gas. LPC, on the other hand, has evolved using acetylene (C2H2) because of its less-complex decomposition to methane and hydrogen. Propane and other hydrocarbon gases decompose to very complex molecules that may result in heavy tar deposits in the cooler regions of the furnace systems.

The basics of magnetic particle inspection