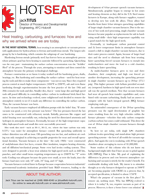 In the most general terms, heat treating is an atmospheric or vacuum process with applications for hydrocarbons to ferrous and nonferrous metals. The largest subgroup by far is hardening, which contains the subgroup of case hardening.

Hardening ferrous metals (primarily steel) has forever been an atmospheric process whose primary goal has been heating to austenite followed by quenching. Quenching was the easy part—maintaining the surface carbon concentration was the “Achilles’ Heel” of the process. Through the years, attempting to monitor and then control the atmosphere became the primary technological challenge.

Furnace construction as we know it today worked well for hardening gears, shafts, bearings, etc. But hardening and controlling the surface carbon—used for heat treating the tools and dies to make those components—was not so easy. Since they required process control at much higher temperatures (1850°F to 2200°F), salt and even flame hardening through experimentation became the best practice of the late 19th and 20th centuries for tools and dies. Smaller dies, that is—some large dies and high speed tools still posed difficulty in controlling surface carbon in traditional brick lined furnaces. As time and technology evolved, some enlightened soul decided to remove the atmosphere entirely to see if it made any difference in controlling the surface carbon. Thus, the vacuum furnace was born.

Early vacuum furnaces employed oil diffusion pumps with the belief that, “If some vacuum was good, a very low pressure was better.” The low pressures forced the hot zones to be constructed with refractory metals. Initially, processes like copper and nickel brazing were successfully run, reducing the need for dissociated ammonia and hydrogen in atmosphere furnaces. Eventually, because of the high temperature capability, high-speed tools and small dies were successfully processed.

Hot work dies steel—such as H-11, H-12, etc. where the base carbon was only 0.35%—was easier for atmosphere furnace control. But quenching uniformly to reduce distortion was still an issue. Oil quenching was too fast, and ambient air cooling was only marginal in achieving acceptable properties for wear and overall operational duration. Vacuum furnaces at the time—the early 1960s—were constructed of molybdenum sheet hot faces, ceramic fiber insulation, tungsten heating elements, and oil diffusion/mechanical pumps. Some even had in-situ cooling systems. They were designed to provide a heat treat solution for high-speed steels such as drill bits, punches, and other small items requiring temperatures up to 2300°F for “T” series tools. Cooling was adequate because the parts were small, as were the loads, since the furnace load sizes were only 18” wide, 24” long, and 12” high.

Vacuum furnaces evolved faster in Europe because cooperation between industrial/governmental/academia institutions provided basic R&D resources, leading to the development of 6-bar pressure quench vacuum furnaces. Simultaneously, graphite began to emerge in hot zones and heating elements as they did in the U.S. Steel manufacturers in Europe, along with furnace suppliers, teamed to develop new hot work die alloys. These alloys had benefits from faster 6-bar nitrogen quenching capabilities of larger single chamber vacuum furnaces. Due to the success of hot work steel processing, single-chamber vacuum furnaces became popular as replacements for salt in hardening small drills—their high temperature capability was a good match for the high speed steels.

Eventually, (a) inadequate carbon potential control and (b) lower temperature limits in atmosphere furnaces caused a shift to single-chamber vacuum furnaces, due to their easier process control. Again, because of larger load sizes and the need to eliminate salt from heat treating, faster quenching forced vacuum furnaces to morph into multi-chambers and move the load to a cold chamber, resulting in faster quenching.

As multi-chamber furnaces grew to two and three chambers, their complexity and high cost forced yet another development, increasing the quenching pressure in single chamber vacuum furnaces up to 20-bar (275.5 psig). This higher pressure with helium provided secondary (tempered) hardness in high speed tools not seen since salt was the quench medium. Now that vacuum furnaces had near oil quench heat transfer capabilities and, combined with vacuum carburizing, finally had an answer to compete with the batch integral quench (BIQ) furnace employing endo gas.

An unintended consequence of the 20-bar quenching pressures was the rapid deterioration of graphite hot zones resulting from the very high velocities within the furnace plenums—velocities that only carbon composite (carbon-carbon) hot zones could withstand. This drove the cost of 20-bar single chamber vacuum furnaces through the roof.

So here we are today, with single LPC chambers (without in-situ quenching) and stand-alone high pressure quenching systems—the best of all worlds for vacuum suppliers. And again the cost is escalating, with 20 bar quench chambers alone averaging in excess of $1,000,000.

Some readers of this column who do not know my background might infer that I have an axe to grind against LPC/HPGQ. That is false. My goal of explaining the differences in process and cost between atmosphere carburizing and vacuum is strictly for the reader’s benefit. I’m comfortable dealing with both. My intent is to stimulate thought as to why furnaces designed to operate at 2400°F are becoming popular with OEM’s in a process that, by accepted specification, is limited to about 1750°F.

What’s the purpose of vacuum in the first place? To remove air, nothing more. Why has HPGQ evolved to where it is today? It, too, requires vacuum as part of its process. However, is there a better lower cost solution?

We need a nitriding process combining speed and control of plasma, without the degree of difficulty