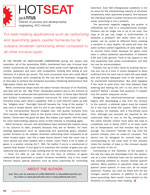 In the heyday of high-volume carburizing during the sixties and seventies, all of the automotive OEM’s maintained their own in-house heat treats; commercial job shops existed but were pretty much fighting over the crumbs, fasteners and such, with competition limiting their billing at just fractions of a penny per pound. The more successful ones who could afford vacuum furnaces were competing for the tool and die business, struggling to find ways to achieve the tempered secondary hardening phenomenon that high-speed steels are known for.

While commercial shops loved the batch furnace because of its flexibility, and they still do, the “Big Three” demanded pushers due to the millions of drivetrain parts carburized and quenched every week. In those days Holcroft and Surface Combustion competed one-on-one for every pusher project. Everyone knew each other’s capability; that is, until Holcroft came up with the “alligator door.” Overnight Holcroft became the “king of the pusher.” It was such a simple device, and it’s still in use today all over the world.

In the mid-seventies Holcroft shipped over 100 pusher furnaces from their Lavonia, Michigan, plant to the Soviet Union’s Kama River truck plant, Kamaz. Those were the good ole days. But maybe, just maybe, with the need for more heat-treating capacity some of that interest is emerging again.

Batch furnaces, vacuum, and atmosphere have received the majority focus in my columns to date, primarily because they are so flexible. For heat-treating applications such as carburizing and quenching gears, however, pusher furnaces by far outpace drivetrain carburizing when compared to all other furnace types. Just like a leaky faucet doesn’t look like much over a short period, but when totaled over a month—wow! That’s a lot of water, or gears in a pusher running 24/7, 365. No matter if you’re a commercial or captive heat treater, if your goal is to maximize the number of gears you can carburize and quench in a day, nothing else for the money even comes close.

I think it’s safe to say that of all the tens of millions of gears carburized and quenched in pusher furnaces worldwide, only a very small fraction require special attention such as press quenching for controlling distortion. Even IGO (intergranular oxidation) is not an issue for the overwhelming majority of drivetrain components when quenched properly. And because the individual loads in pusher furnaces are relatively small, quenching is not a problem.

The perceived negative nagging the pusher is inflexibility, but that is a misunderstood concept. Pushers can be single row or up to six rows, five trays or 20 per row, single or multi-chamber. Is flexibility a problem? Not really: Each row in a pusher can be cycled at different times creating a variation in case depths. All parts will have the same surface carbon regardless of case depth, but no worries there either because for gears most have a carbon potential specification of between 0.80 and 0.85 percent. Time in the quench is the only parameter that needs consideration, but that too can be accommodated.

Pushers live up to their name by pushing tray-on-tray one row at a time in cycles designed to allow sufficient time for each tray to reach the case depth and still provide adequate time in the quench oil for martensite transformation. But what happens if the cycle or push time—the time between trays entering and leaving the cell—is too short for the quench? Before I answer that question I’ll explain how the pusher sequence works:
Designing the electrical-mechanical sequence begins with discharging a tray from the furnace to the quench; a physical space must be created for a new tray to enter the system. Take a three-row pusher, for example, with a five-minute cycle time. Although just seconds are required for the carburized steel to cool to the Ms temperature, the entire transfer motion must allow the load to completely cool to below 150°F or at least reach the oil temperature, and five minutes may not be enough. The solution? Transfer the tray from the quench elevator onto an under-oil conveyor. This device can be designed for several trays, and corresponding to the cycle time of five minutes times the number of trays on the conveyor equals total minutes in the oil.

Contributing to the flexibility of the pusher is the way the trays are discharged from the system, one at a time. Individual trays can be selected via tray tracking software to receive several quench options. Many pushers in operation today can oil quench, press quench, or slow cool, all via recipe selection. Pushes can even be fitted with 20 bar nitrogen quench systems in addition to oil and press quenching. Next month, more details on the flexibility of continuous heat treating.