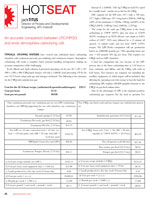 I sized the comparison this way because of the LPC process, due to the faster carburizing time at 5.42 hours to heat, carburize, and diffuse, and the UBQ, with endo at 8.29 hours. Two furnaces are required, not including the ancillary equipment, of which impact will be included. Also affecting the operating cost is the energy to heat the loads for carburizing. LPC employs 180 KW graphite elements vs. the UBQ’s six gas fired radiant tubes.

One of the advantages of LPC is the minimal acetylene carburizing gas required. For the load in question I’ve assigned a surface area of 25 M2 (269 ft2) not a huge load for the UBQ maybe about average. LPC required 59 CF of acetylene when the cycle is modeled with simulation software. However, this volume has been verified empirically. The acetylene cost will depend on the total facility consumption, but $0.50 per CF is used for this comparison resulting in a cost of $29.50 for each LPC. (Table 1)

Prior to vacuum processing parts are washed and pre-oxidized; in some instances with certain steels applying a thin oxide can enhance carbon diffusion. In addition, this LPC arrangement includes a continuously running vacuum system that evacuates both LPC chambers and provides the pressure control for the acetylene/nitrogen pulse process.

For this comparison, the steel used can be hardened with 10 bar nitrogen for 20 minutes. Nitrogen is not recycled. The same utility rates apply for both furnace systems. However, the utility cost for the recirculated water system required for the HPGQ (350 to 450 gallons per minute when quenching) is not included in this comparison and is not insignificant.

Left is the operating cost summary for the two LPC’s and one HPGQ, servicing both chambers plus the continuous pre-wash, pre-oxidation, and temper and two UBQ’s and batch washer and temper based on the production above:
I’ve made some assumptions, such as cost of acetylene for a particular total plant usage, based on 300 cubic foot daisy-chained tanks, and I’ve estimated the energy for the continuous washer, pre-oxidation, and temper. The quantity of energy I used for the continuous systems is adjusted to the production from actual equipment of higher production. The overall processing times are empirically accurate for the case depth indicated.

** Hot Seat columnist Jack Titus has an additional column in Thermal Processing for Gear Solutions, in which he discusses scheduled maintenance of furnaces, distortion control, and low-pressure carburizing.