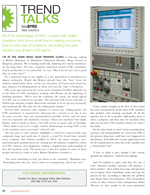 I’m at the AGMA Basic Gear Training class in Chicago, talking to Robert Hamilton of Hamilton’s Industrial Machine Shop, located in Kingston, Jamaica. We’re making small talk, admiring the various machinery on the shop floor. “It’s true, computer numerical control (CNC) machinery in gear production is very powerful,” he says. “But it doesn't give you a good idea as to the ‘why?’”

It’s a statement that, to me, applies to a new generation of manufacturers almost exclusively. People like Robert already have the “how” from the industry minds before them—in his case, his father. As I learn more about the gear industry, I’m finding plenty of those who fear the “why” is being lost.

Fifty years ago and across the ocean, gear consultant Geoffrey Ashcroft was at the birth of CNC machinery, working with Pfauter on the digitizing of hobbing machines. “We’ve seen the evolution. Of course, the initial appeal of CNC was its reduced set up time. The precision ball screws and ball- or Teflon-type machine weights allowed the machine to be set up very accurately and automatically. We soon saw the selling point change.”

Several other elements came together to reveal new “selling points” for CNC machinery: it required less education for a person to set up; it was far more accurate than any mass-produced machine before; and the parts were less expensive (the hardware, anyway). These new machines had simple frames, with no shafts in them, a few ball screws, no gears, and no bearings. “There didn’t seem to be a single, realistic disadvantage to using CNC, as far as the machines were concerned,” Ashcroft said. Figure 1

The last part of that sentence highlights a trend I’ve noticed from gear companies large and small since I started, a trend I’ve heard from virtually every company Gear Solutions profiled in 2013: too many younger, new-generation gear manufacturers are coming into the industry completely reliant on CNC software and equipment, lacking a fundamental understanding of how the machines work. The good news is that I’ve spoken to some of these people and they’re ready to learn. Robert Hamilton certainly is.

“You need something to lock you down to the essentials,” Hamilton says. “Something that tells you, ‘this is where it's coming from…this is the root.’”

I had a similar thought on the floor of Gear Expo last year, surrounded by all the shiny CNC machines that perform with stunning exactitude. If all the operator has to do to produce high-quality gears is select a program and then start the machine, then what do you have? The machine doesn’t see what it has made.

On the other hand, so what? As far as productivity, accuracy, and maintainability are concerned, CNC is the greatest thing that could have ever happened to this industry. And while there is some appreciation lost for the manual process, does this really translate into a “bottom line” loss?

“I have to think it does, though I can’t exactly quantify the argument,” Ashcroft says jokingly.

And I’m inclined to agree with him. For one, a more educated machine operator will produce a better product—there will be less scrap, and operators can recognize when something’s amiss and stop the process. In fact, according to Ashcroft, the problem runs deeper than a few bad parts. “The real problem comes in when someone from management thinks, ‘Because we have people in the mass production department who are just pressing a button, we can have the same people pressing buttons in the aerospace industry.’ And that’s scary—just taking a guy off the street, giving him a drug test, putting him in front of the machine, and saying ‘press this button.’” Figure 2

It’s an oversimplification, of course—plenty of CNC machine operators have a profound appreciation for tools they operate. But Ashcroft has a good point. The gear industry is seeing fewer and fewer machine operators with the know-how required to maintain the integrity of the product throughout the manufacturing process, and to take care of problems as they come along. The result is machine operators who posses no real machine tool experience operating half-million dollar machines. That’s dangerous.

There’s an opportunity here. All of the advantages of CNC, coupled with skilled operators who know what they’re making and know how to take care of problems, can put the gear industry way ahead of the game. The response in the last few years to machinery education programs around the country has been tremendous. AGMA’s Basic Training for Gear Manufacturing was at maximum enrollment this year, and Ashcroft himself taught a gear school, “to give less-experienced operators a behind-the-scenes look at what’s actually happening when they make a gear. You can see the difference in the final product, and the responses from management—floor management—are glowing,” he said.

Before we learn how to use an ancient (1965) hobbing machine, Robert and I put on our safety goggles in front of a whiteboard filled with strange equations. He takes a long look at the board and says, “In school, I wasn't good at remembering history and literature. But subjects with roots—mathematics, physics—involved finding the key to unlock it all. The ‘that's it!’ moment—that's why all of this is important. Even if I never run a manual machine, it is essential to me to know how it works.” 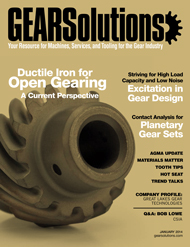