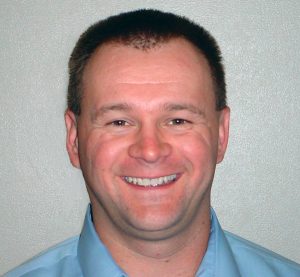 You’ve been with the company for five years now, how did you come to join it?”

I was originally trained as an engineer, and I was working with a company in an unrelated field that required a great deal of traveling—and this was right when I’d gotten married, too, so being on the road so much was starting to become a problem. A lot of the work was based out of the West Coast, so I was interested in finding something in Illinois, where I’m from. When I found out about an engineering position with Clifford-Jacobs I was very interested—I liked the people I’d met, the positive atmosphere, and the company’s great reputation, too—and when they offered me the job I accepted it immediately. It was a great opportunity, and I definitely made the right decision by taking advantage of it.

You began in engineering but you’re now sales manager… how did that come about?

It was really a natural transition, if you think about it. When I first started the job I was doing straight design work, and then it made sense for me to get involved in actually quoting the customer. I found that my engineering background and understanding of products and processes at that level not only allowed me to “speak the language” the customer was accustomed to, but it also helped gain their confidence since they knew I had hands-on experience with what we were talking about. As I got more involved in that aspect of the business—collaborating with our customers on quotes for the products and services they needed—I came into more and more contact with Justin McCarthy, who was vice president of sales and marketing for Clifford-Jacobs at the time. We began working pretty closely together, and it was a real pleasure for me to be able to learn about sales from such a professional.

Then, when he left to become executive vice president of sales and marketing for Ajax Rolled Ring and Machine, Inc., David Sulzbach—who is president of Clifford-Jacobs—asked if I’d be interested in stepping up to the position of sales manager in Justin’s absence. Again, it was another great opportunity, and I felt that the time I’d spent working alongside Justin had prepared me for the role, so I was honored to accept the promotion to sales manager.

How have you approached your new responsibilities?

The good thing is that I already knew the vast majority of our customers, but I’ve made a point of reaching out to everyone so they’ll be comfortable with the transition. I want them to know there will be no change in the level of customer service they’ve come to expect from us. At the same time, I need to hear from them about areas where we could improve what we’re doing, because when we say we want to develop “partnerships of value” with our customers, we really mean it. So the first thing I was interested in doing was learning as much about our existing customers as I possibly could, which often includes making site visits to familiarize myself with their operation, and to support David Sulzback in his efforts to help position the company as it grows and moves forward. Part of that involves constantly considering new markets to pursue in addition to those we currently serve, which includes off-highway/construction equipment, mining, forestry, oilfield, defense, power generation, railway, and aerospace equipment, among others. But we also need to think about our presence from a geographic standpoint, including emerging markets found overseas.

As to how we accomplish this, one of my responsibilities includes overseeing the efforts of our extensive network of sales representatives, numbering more than 20 individuals who are found across the United States and Canada. I’m here to follow up on any leads they may generate, and also to accompany them to visit current or potential customers to see how we can meet their requirements. We work with some very high-profile, Fortune 500 companies—Timken, Caterpillar, National Oilwell Varco, and Boeing Aerospace, for example—and we’re constantly working to live up to their expectations and confidence in us by acquiring the latest equipment and technologies. We’ve invested more than $7 million in capital improvements in recent years, in fact. So no matter the size of the order, or the complexity or material grade of the part, we’re eager to work with our customers on their custom forgings. Because if we help them meet their goals, then we’ve reached our own goal as well.