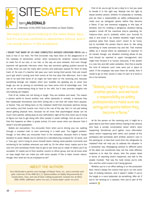 I doubt that many of us have completely avoided crossing paths with a bully or two in our lives. The first encounter may have been on the playground or in the hallways of elementary school, when someone—for whatever reason—decided to make fun of our size, or our hair, or the way we were dressed. And even though teachers will generally intervene when they see someone getting pushed around by a bully, there are just too many dark corners and wide-open spaces for them to keep track of. So even if a teacher did save your neck during third period, that just meant you’d get what’s coming (and then some) at the bus stop that afternoon. And it also has to be said that some of us might not have been on the receiving end, because something strange can happen when your buddies are goading you to prove how tough you are by picking on somebody you have some kind of advantage over. That can be an embarrassing thing to have to live with, but it also provides insights into why bullying can happen.

First of all, bullies are not strong or tough. They are shallow and weak. The reason a person wants to hound another one, either physically or verbally, is because they feel inadequate themselves and think acting like a hot shot will make them popular, or feared. They are falling back on the mistaken belief that everybody admires strong-arm tactics, and that muscle over mind is the rule of the day. But I’m not just talking about getting physical here, because we all know that psychological abuse can be much more painful, eating away at your self-esteem right at the time when you’re trying to figure out how to get along with other people in public settings. And as sad as it is that this happens so often in grade school, it’s even worse when you discover that it doesn’t end with graduation.

Bullies are everywhere. You encounter them when you’re driving your car, walking through a crowded mall, or even swimming in a hotel pool. The biggest problem, though, is how often you encounter them in the workplace, because that’s a harder situation to avoid. Maybe you’ve worked at a manufacturing company for 10 years, and a “new guy” who’s trying to prove himself starts making mean-spirited comments and snickering to his buddies whenever you walk by. On the other hand, maybe you’re the new hire and somebody thinks they’ve got to see what you’re made of before you’ll be accepted. Or maybe you’re from another country or ethnic group, and we all know what an easy target that can make you with some people. If this is basic human nature, though, then what are we as employers to do?

First of all, you’ve got to put a stop to it, but you need to handle it in the right way. Nobody has the right to abuse another person, whether it’s physically or mentally, and we have a responsibility as safety professionals to make sure we extinguish sparks before they become a flame. If you see someone engaging in this type of behavior and it’s creating a dangerous situation—taking people’s minds off the machines they’re operating, for instance—then you’re probably within your bounds to step in and break it up. Another situation might involve practical jokes that clearly aren’t meant to be funny, but to humiliate the person they’re done to, like doing something to make someone trip and fall. That involves safety, so it should either be addressed or reported. To be honest, though, any situation involving abuse of any kind should be reported to upper management, who might then forward it to human resources. If the person is a new hire and still under probation, then this is exactly the kind of behavior such rules were put in place to catch. If the employee has been there for awhile, then it needs to go on their record in case it’s part of a trend in his or her behavior.

As for the person on the receiving end, it might be a good idea to pull them aside without making it too obvious and have a private conversation about what’s been happening. Sometimes you’ll gather more information about what’s happening both within and outside of the workplace—did somebody dent another person’s care in the parking lot, or take their lunch from the refrigerator by mistake?—that will help you to address the situation in a productive way. Reassigning workers to different parts of the plant can sometimes help, but the most effective response is to stop the abuse, take the proper steps in terms of reporting what’s happened, and talk to the people involved. That way the bully knows you’re onto him, and the victim knows it isn’t being ignored.

Whether you’re in an office setting or on the production floor, there’s always the chance that you’ll run into some type of bullying behavior, and it doesn’t matter if you’re the target or a mere bystander, do something. After all, if you’re not working on a solution, then you’re part of the problem!