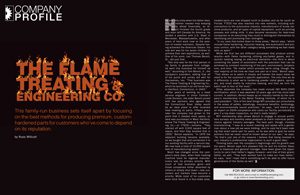 He was only a boy when his father died, and his mother needed help keeping the family afloat financially, so Arthur Benoit finished the fourth grade and soon left Canada for America. He landed a position with U.S. Steel in Worcester, Massachusetts, and after years of hard work rose to the position of master mechanic. Despite having achieved the American Dream, his real aim was for his seven children to achieve their own aspirations, as well. One of his sons, Leo Thomas Benoit, Sr., did just that.

“Not only was he the first person in my family to graduate from college, he went into business for himself as well,” according to Tom Benoit, Jr., the company’s president, adding that all of his aunts and uncles did well for themselves, too. “That business was The Flame Treating & Engineering Co., which he launched in an old horse barn in Hartford, Connecticut, in 1940.”

After years of working as a steel service engineer in Union Carbide’s Linde Division, the elder Benoit joined with two partners who agreed that the Connecticut River Valley would be an ideal place to offer localized heat treating on parts. Fifteen years later the company had grown to the point that it needed more space, so land was purchased in West Hartford, where The Flame Treating & Engineering Co.—or FTECO—remains. “They started off with 3,000 square feet of space, and then they doubled that in 1959,” Benoit explains. “In 1976 the adjacent building became available, so we bought that and connected it to our existing facility with a service bay. We now have a total of 15,000 square feet of manufacturing space.”

Much has changed since the company’s early days, when heat treating machine tools for regional manufacturers was its primary activity. With much of that business gone—and those companies either absorbed by others or simply shut down—new customers and markets have become a priority. While most of its customers were once found in a four-state area, treated parts are now shipped north to Quebec and as far south as Florida. FTECO has also reached into new markets, including subcontractors to the automotive industry, manufacturers of screw machine products, and all types of capital equipment, such as printing presses and rolling mills. It also became necessary for heat-treat companies to do everything they could to distinguish themselves by identifying and promoting their strengths.

“In our case that boiled down to three areas,” Benoit says, “which include flame hardening, induction heating, and automation and process control, with the latter category being something we feel really sets us apart.”

While the first two are different processes that produce similar results—with flame hardening utilizing oxy-fueled gases, and induction heating relying on electrical elements—the third is about combining the speed of automation with the precision that can be achieved by constant monitoring of the part, environment, temperature, and time. “No matter which process we’re using, though, the vast majority of the time we treat one part at a time,” Benoit says. “That allows us to watch it closely and harden the exact areas we need to for the customer’s specific application. The only time we do it differently is when we’re hardening powder metal gears, sprockets, and small shafts by induction heating, and then we limit the batch size to four at the most.”

Other advances the company has made include ISO 9001:2000 certification, which it was awarded 10 years ago and has since kept current. In addition, Benoit keeps up on industry trends by the company’s membership in the Metal Treating Institute, of which he is past-president. “One of the best things MTI provides are consultants in the areas of safety, metallurgy, insurance benefits, technology, and environmentally sound practices,” he says, “and there’s also an expert on OSHA compliance who visits our facility periodically to give it a top-down inspection, so that’s really helpful.”

MTI membership also allows Benoit to engage in annual profit/loss surveys and monthly sales analyses to check individual performance against industry averages. The best part, though, involves brainstorming. “I was at a recent meeting and spoke with a gentleman about a new job we were bidding, and he said he’d been making that exact same part for years, so he was able to give me some pointers that we never could’ve known about on our own,” he says. “So that’s just one of the reasons I believe that being involved in your industry’s professional organization is such a good idea.”

Thinking back over the company’s beginnings and its growth over the years, Benoit says he’s pleased that he and his brother Dave, who is treasurer and general manager, have been given the opportunity to carry their father’s legacy forward—and that of their grandfather, as well. “They both worked hard to make our lives better,” he says, “and I hope that’s something we’ll be able to offer future generations of the family as well.” 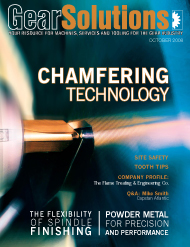