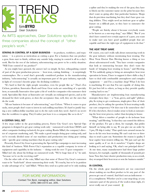 Staying in control of a gear business — its products, workforce, and reputation — is a process as meticulous as cutting a gear. For a business that can produce a gear, from start to finish, without any outside help, staying in control is all in a day’s work. But for the rest of the industry, subcontracting can prove to be a sticky situation. “Will I lose control of my product?”

As you might have guessed, the answer isn’t so simple. In fact, relinquishing control of part of the gear production process — heat treat, cutting, finishing — is surprisingly commonplace. For a word that’s generally considered profane in the manufacturing industry, “subcontracting” is actually an important part of the gear industry, especially in light of everyone’s favorite gripe: the declining workforce.

“It’s hard to find the right people nowadays, even for people like us.” That’s Zen Cichon, president, Innovative Rack and Gear. Gear racks are something of a specialty item, so naturally Innovative does quite a bit of work for companies who outsource their work. Specialists like those at Innovative are virtually an endangered species, and as the demand for their work grows, so does the acceptance that, well, they are the ones that do the work.

“All our business is because of subcontracting,” says Cichon. “When it comes to gear racks, most people don’t want to invest in rack milling machines. It’s hard to justify buying a new million-dollar machine just to do the rack work they need. And it’s no secret that the workforce is aging. They’d rather just leave it to a company like us to do it.”

Presently, Forest City Gear is generating the Special Ops campaign to start increasing this kind of business. With Forest City’s reputation as a capable company in terms of equipment and capability in the industry — doing work for over 75 gear companies — Mikel isn’t shy about his feelings on outsourced work. “We’re huge fans of it,” he said, “because we’re on the receiving end!”

On the other side of the coin, Mikel says that some of Forest City Gear’s customers want to be “hush-hush” about outsourcing their work. “It’s touchy, but we’re in position to take advantage of it,” said Mikel. “When they send us a print and we’re only making a spline and they’re making the rest of the gear, they have to block out the customer name on the print because they don’t want us going after that particular business. Shops that do precision machining, but they don’t have gear cutting abilities. They might need an intricate gear or spline feature on a difficult part, so they have to outsource the gear cutting.

“People are finicky about it because everybody wants to be known as a one-stop shop,” says Mikel. “But if you don’t have control over certain aspects of a part, you want to make sure you have good qualified people that are capable and have the right type of equipment to do that.”

The Heat Treat Game
Of course, you can’t really talk about outsourcing work in the gear industry without mentioning heat treating. The Heat Treat Doctor Dan Herring knows a thing or two about subcontracted work. “You have certain companies that look at outsourcing because they don’t want the hassle of bringing heat treating in house,” said Herring. “If I’m suddenly going to bring an atmosphere heat treat operation in house, I have to support it three shifts a day, I have to deal with combustible atmospheres and complex equipment — and I’m a machine shop! What I do best is machining. It’s not that I’m not capable of doing this. It’s just best left to others, as long as they provide quality coming back to me.”

Manufacturers are implementing lean manufacturing strategies these days — a “lean, green, and agile” philosophy. In trying to get continuous, single-piece flow of their product, they’re asking the question: Is heat treating really our core competency? Or does our it lie somewhere else? If it lies elsewhere, then it makes sense to look at outsourcing the heat treat process, rather than keeping in house.

“What drives a number of people to do in-house heat treating,” said Herring, “is that they can control the delivery of the product. I’ve got a client, for example, that prides himself on being able to say, ‘If you give me an order by 3 pm, I’ll ship it today.’ That quick turn around means he has to do his own heat treating. He can’t wait two or three days to send a part out. Sometimes the reason is quality. I hear captive heat treaters telling me, ‘We just can’t get the same quality as if we do it ourselves.” Captive shops are looking at it and saying, ‘Ok, what’s our principal driver?’ At one time, many manufacturers had these large pusher furnaces, for example, capable of thousands of pounds per hour. Now they have shorter production runs, so as a result, they revamped their heat treat or sent the business outside.”

In Control
On the whole, gear manufacturers are too concerned about making an excellent product to let any part of the process get out of control. And that’s not an indictment — it’s a compliment. Whether you’re a one-stop-shop, or you outsource part of the process, if the work is done right, it’s never really out of your control.