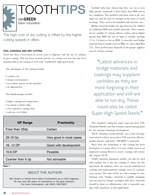 There has been a movement in recent years to dispense with the use of coolants in gear cutting. This has been normal practice in cutting cast iron but has been unachievable in the cutting of steel with “traditional” high speed steels.

The advantages of dry cutting include:

Carbide hobs have shown that they can cut at very high speeds, commonly 3 times faster than HSS and in dry conditions. The problem with these tools is the very high cost and the lack of strength in the sense of tooth breakage. They need to be handled with extreme care.

Bridge materials bridge the gap between the abilities of traditional HSS and carbide materials. These materials are capable of cutting without coolant and at higher speeds than HSS but not as high as carbide, perhaps 1.5 to 1.8 times as fast as HSS. A currently used bridge material from Crucible steel is CPM 121 (also called Rex 121). Their performance depends on the proper application of various coatings.

The standard coating for many years has been TiN, Titanium Nitride, and this remains a good starting point for any cutting technology development.

TiCN, Titanium Carbo-Nitride, was a later development aimed at those areas where TiN was least effective, mainly abrasive and hard ( 300 BHN +) materials.

Since then the technology of this coating has been developed to a point where it is now widely used as an improved coating. However, newer coatings will eventually surpass TiCN.

TiAlN, titanium aluminum nitride, can also be used with coolant but is also the coating of choice for dry operations. In addition, there are several multi-layered coatings and multi-material coatings, most of a proprietary nature. The state-of-the art with coatings in combination with “bridge” materials is rapidly changing, and any process change envisaged with these materials should be done in collaboration with a reputable supplier with experience in this application.

Recent developments include “super lattice” coatings containing titanium, aluminum, chromium, ytrium, and nitrogen in combination and a self lubricating coating of alternate layers of TiAlN with molybdenum disulfide (MoS2).

As stated, carbide   is extremely brittle due to its very high hardness and tools made of this material break very easily. Again the complex shape of tools like hobs is a problem for such materials.

On the other hand, carbide is capable of cutting at rates three times as fast as high speed steel and without coolant. Because of this there is a great deal of interest in its use and it is gradually finding its way into the high production areas of hobbing.

Latest advances in bridge materials and coatings may supplant carbides as they are more forgiving in their application and still are able to run dry. These could also be called Super High Speed Steels as they are similar in composition and technology to regular HSS but with very high amounts of alloying materials such as cobalt and vanadium.

There is also a consideration of tooth size in application of carbide and bridge materials.

The coarser the pitch, the more difficult the application and the chance of a successful usage. We can say with some confidence that the following is true when cutting good machineable materials in the “normal” hardness ranges of 180 to 240 BHN (Figure 1).

The above comments re “carbide’s lack of strength” apply mainly to complex shaped tools, especially hobs. Most machining (milling and turning) is today performed with inserted blade cutters where simple regularly shaped, carbide bits are mechanically locked into the tool body. Because of their shape, size and support from the tool body, these are able to stand high cutting loads without breakage. In the event of a breakage the tool insert is easily and economically replaced.

This technology has entered the gear-cutting field with single index non-generating roughing tools and inserted hobs which are capable of producing a profile close to finish requirements, close enough for subsequent finish grinding. In summary the current state of the art in respect to dry cutting is as follows:
The high cost is offset by the higher cutting speed. The latest micro fine carbides are stronger than traditional carbides but still much more brittle than any type of HSS. 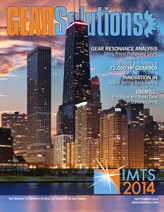