As I mentioned in the first installment of this article (please see June 2005 issue of Gear Solutions magazine), I’m very familiar with the Gleason Loaded Tooth Contact Analysis program and believe that one of its great attributes is the insight it gives into the inner workings of bevel and hypoid gear tooth load sharing, load carrying, and motion transmission. I’d like to sum up some of those insights in the following pages.

Consider the LTCA of Figure 16. This is a 12×41 19DP Zerol (10 degree spiral angle) with a large amount of profile crowning, 800 microradians. This LTCA was run attempting to model a straight bevel set with this estimated amount of profile modification. We frequently see relatively large amounts of crowning for the fine pitch parts in our marketplace. For example, Figure 17 shows a fine pitch hypoid motion curve at no-load as measured in a Gleason No. 554 Single Flank Tester. The motion error is about 550 microradians. Figure 18 shows a similar inspection result for an 11×41 1.25 Module spiral bevel set, with nearly 500 microradians motion error. Coming back to the straight bevel set, at a torque corresponding to the bending stress endurance limit the motion error is still large, greater than 700 microradians (Figure 19). This is interpreted as meaning the gear lags the theoretically correct output position by as much as 700 microradians, and then is accelerated to the theoretically correct position only to fall behind again by 700 microradians. The angular pitch of the pinion is 0.571199 radians. The angular pitch of the gear is 0.153248 radians. Dividing 0.571199 by 0.153248 gives us the theoretical transmission ratio, 3.727:1. If the angular position of the gear is lagging its correct position at some point in time by 700 microradians, then we can consider the ratio at that instant to be 0.571199/ (0.153248-.0007) = 3.744:1. So the error can be understood as a continuous variation in the transmission ratio: for a uniform (constant) input velocity, the output gear will rotate non-uniformly. The output gear is continuously speeding up and slowing down on a pitch-to-pitch basis, hunting the nominal ratio. Where there is acceleration like this there is an associated force which can act as a source of objectionable vibration and noise at multiples of tooth mesh frequency. Figure 20 shows an LTCA for the same ratio and module, but with significantly reduced–possibly too much–crowning and a small spiral angle. The motion error changes as the load is increased, with the curves flattening out before starting to increase again after the torque reaches 50 percent of the endurance torque. This particular application is lightly loaded, operating below 50 percent of the bending stress endurance limit for a case-carburized wrought steel gear set.

Figure 21 is an LTCA for a medium pitch 6×38 spiral bevel ratio. It is revealing to look at the rigid body displaced-position motion curves at the elevated loads. They show an imbalance in the possible points of contact. There are more points available at the toe and less at the heel, where the engagement phase of tooth meshing takes place for this case. The motion error curve eventually takes on a ramp shape at high load, indicative of impact loading. The torsional wind-up has effectively placed the engaging tooth “out of position” for a smooth hand-off. The engaging tooth experiences a concentrated, localized contact corresponding to the gear member top heel edge striking the pinion heel dedendum. Might moving the build-position contact toward the toe offer some benefit? This was investigated in Figure 22 and resulted in an imbalance of potential contact points again. This time the contact runs off the toe end of the teeth as the teeth disengage. The load “falls off” the end of the disengaging tooth and is absorbed by the teeth remaining in contact. In both cases, the calculated contact ratio for the design is not achieved as “all possible points of contact” are never realized. Rather than a position change, the design of Figure 23 features a reduction in the length of the initial tooth bearing (greater lengthwise crowning). The rigid body displaced-position motion curves show a better balance. The contact no longer concentrates at the heel edge. “All possible points of contact” and therefore the calculated contact ratio can potentially be reached. The motion curves in general exhibit greater motion error at the lower torques but not a ramp form at elevated load. For a design with a given basic cutter diameter in a housing of given stiffness, there is an optimum tooth bearing length and build position considering motion smoothness and avoidance of concentrated contact loads.

The choice of “design cutter diameter” determines the nominal lengthwise curvature of the gear teeth. It is important to mention that this curvature interacts with the stiffness of the gearset supporting structure, or housing, having an influence on the suitability of the displaced-position motion curves (see reference 1). Figure 24 shows the resultant motion curves for two medium pitch designs that have very similar TCA initial conditions (pattern length, profile crowning, and path of contact angle) and are subject to the same LTCA default deflections with load. One design is based on a 9″ cutter diameter and the second design is based on a 6″ cutter diameter. The displaced-position motion curves are better balanced for the 6″ cutter design, as evidenced by the smoother motion curves at peak torque.

For many years “lengthwise path of contact” gear developments–sometimes called “high bias developments”–have been used with success for applications that are highly loaded, for applications subject to large assembly tolerances, and for applications subject to high deflection under load. The term “lengthwise path” refers to a tooth development where the path of contact proceeds to run more nearly parallel to the root line of the gear. The lengthwise path is used in combination with a judicious choice of profile crowning to control the sensitivity to assembly tolerances and deflections. Control, in this instance, means to keep the load safely within the boundaries of the teeth to avoid excessive load concentrations. In Figure 25 we see a hypoid LTCA for a 5:1 ratio with about 200 microradians initial motion error and a lengthwise path of contact. In this example the pinion convex flank is driving the gear concave flank so the contact starts on the gear addendum at the toe end, progresses along the gear profile into the dedendum, and then transfers at the heel end. Compare this LTCA with that of the more conventional development of Figure 25. A characteristic apparent in the high bias development is that the edge contacts have been eliminated. The contact pressure tables for these two examples are given for comparison in Figure 26. The contact pressures for the lengthwise path design at elevated torques are less in the engaging and disengaging portions of the contact, the peak contact pressures are less and the average is less. A caution is to limit the path of contact angle so that, at full load, the contact does not enter or exit along an inside or an outside edge of the teeth. A second high bias LTCA example, a spiral bevel set with a large number of teeth and a small amount of initial motion crowning, appears in Figure 27. The contact is well confined inside the tooth boundaries with no edge contact. The smooth motion curves show the benefit of having several pairs of teeth in contact.

Various factors influence the optimization of a gear design so that it carries load and transmits motion with the lowest contact stress and with the least displacement error. LTCA can be used effectively to demonstrate the complex relationship between these factors. It is hoped that this paper will lead to a better understanding of how gears work and prove to be a useful tool to anyone designing or developing bevel or hypoid gears. 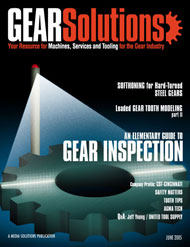