Shot peening is a cold working process used to produce a compressive residual stress layer and modify mechanical properties of metal by impacting a surface using round, bead-like particles with sufficient force to create the required compression deformation. These particles can Be Made of various metals, glass, or ceramics. Using mass and velocity, each particle functions as a tiny ball-peen hammer as it impacts the part and leaves a small indentation on the surface, creating a compressive residual stress layer in the surface of the part.

Shot peening significantly improves part performance and life. Benefits of shot peening include improvements in: Fatigue life (torsional, axial, bending, and thermally-induced fatigue), fretting, pitting, galling, and corrosion failures (stress corrosion cracking, exfoliation, and intergranular corrosion). It has been demonstrated that most cracks will not form or grow in a high-compression stress zone. Since nearly all fatigue and stress corrosion failures originate at or near the surface of a part due to tensile stress, the compressive stresses induced by shot peening increase part life. Depending on the shot material, quality, intensity, coverage, and part geometry and material, shot peening can increase fatigue life up to 1,000%. 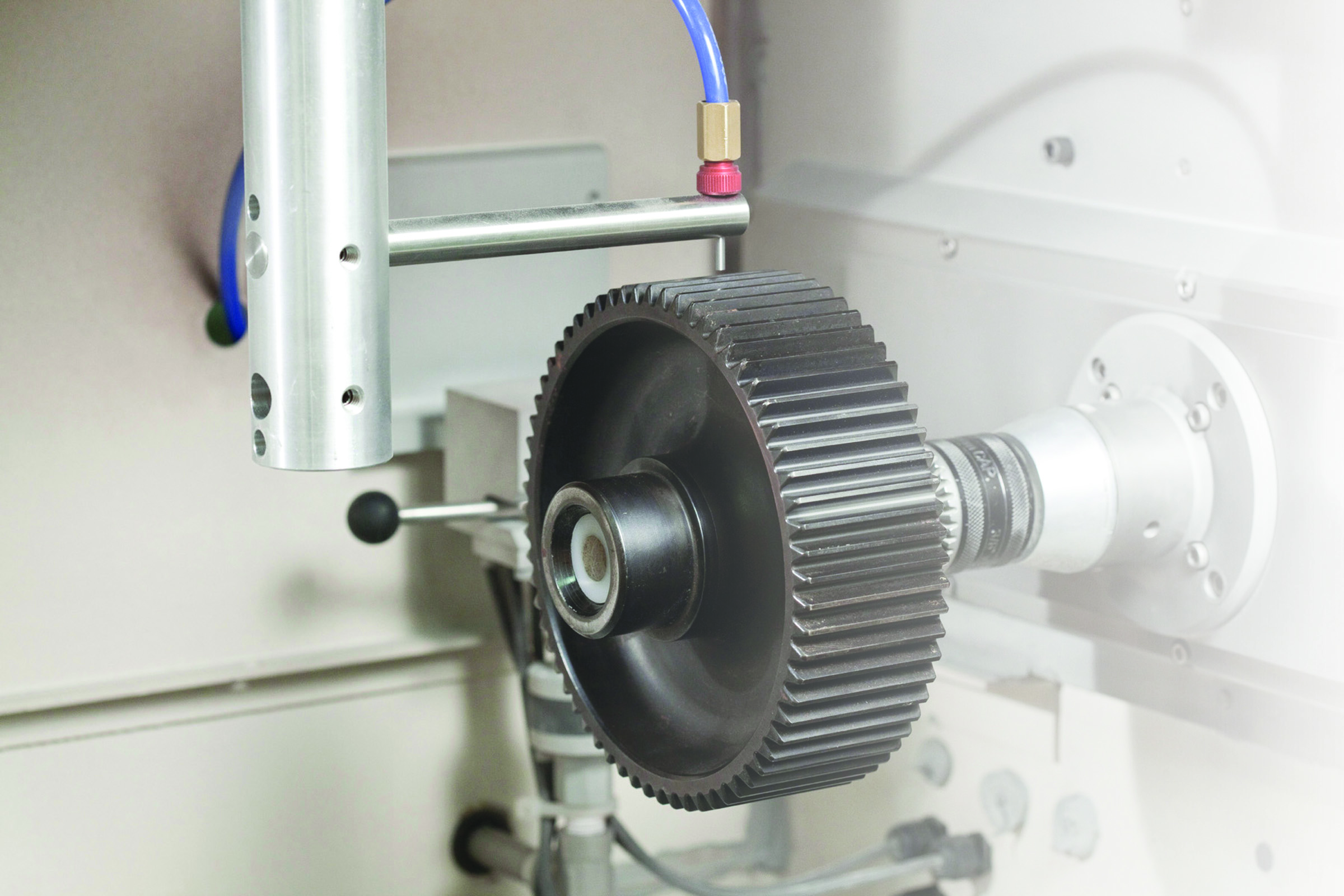 Some Challenges in Shot Peening

When using traditional shot peening systems, which provide “blanket-type” shot blasts of media to any surface being peened, manufacturers must either make elaborately-fixed jigs to cover gear tooth faces to remain un-peened, or hand-tape/mask each of these areas to prevent them from being peened. The big nozzle of the machine then blasts away until the gear is completely processed. The gear is then removed, unmasked, and goes on to its next process step. This operation requires a substantial air compressor and, because the media is propelled in a wide blast, fragments continually hit the interior walls of the peening chamber. This requires the chambers to be reinforced with internal steel panels simply to ensure the life of the system itself.

Some traditional automated shot peening systems have indexing tables that allow operators to place parts on them and index gear assemblies into the machine for peening. However, each gear assembly is still shot-peened individually. The alternative is to place them in a wheel-type system and peen several at once.  Both processing arrangements still require the gear or part to be masked in order to protect the areas that are to remain un-peened. Developing and maintaining special tooling, and the labor-intensive process of masking, both add substantial cost and process time to the project.

Precision shot peening brings an entirely new concept to this field, and is complementary to its larger “cousin.” Using glass bead media, Comco has been shot peening for years with microabrasive blasting technology. A major difference with the microblasting approach is it that uses very fine media (150 micron or finer). Also, the media can only be used once. Shot peening media is larger and is reclaimed for reuse. However, the theory behind both microblasting and shot peening is basically the same: Accurately mixing air and media and then shooting it at a target part. Taking the step from microblasting to precision shot peening was a matter of designing a new and larger automated system to handle and recycle larger media. This has to be done within a larger, automated processing chamber that contains the process and still works with the highly-focused precision of an automated lathe microblaster.

A precision shot peening system can blast the valley in any size gear, without masking, while consuming far less energy than a large nozzle or wheel-type, traditional shot peening system. It brings an entirely new concept to this field.

Precision shot peening takes a highly focused approach to peening. Typical nozzle sizes are 0.060” to 0.185” ID. This smaller nozzle size creates a very collimated, well-controlled media stream, and ensures 100% of the media hits the part. The nozzles move above the part and focus the peening blast directly at the area to be strengthened.

Coupled with automation, a precision shot peening system needs no protective steel plating as required in the much larger, traditional shot peening systems.  Gears and gear assemblies to be peened require very little or no masking at all. The system is also much less costly to operate because it requires a smaller air compressor unit and utilizes the media much more efficiently. The media is not broken down or wasted by hitting the sides of the machine instead of the part.  It is recovered, resized, and recycled for future use.

The smaller nozzle size and tighter automated control allow a precision shot peening system to process multiple parts at the same time, depending on size. Also, standard shot peening machines can peen with either ferrous or non-ferrous material (they usually can’t handle both). Precision shot machines can deliver all media types. They can even deliver multiple sizes of the same media type simultaneously. 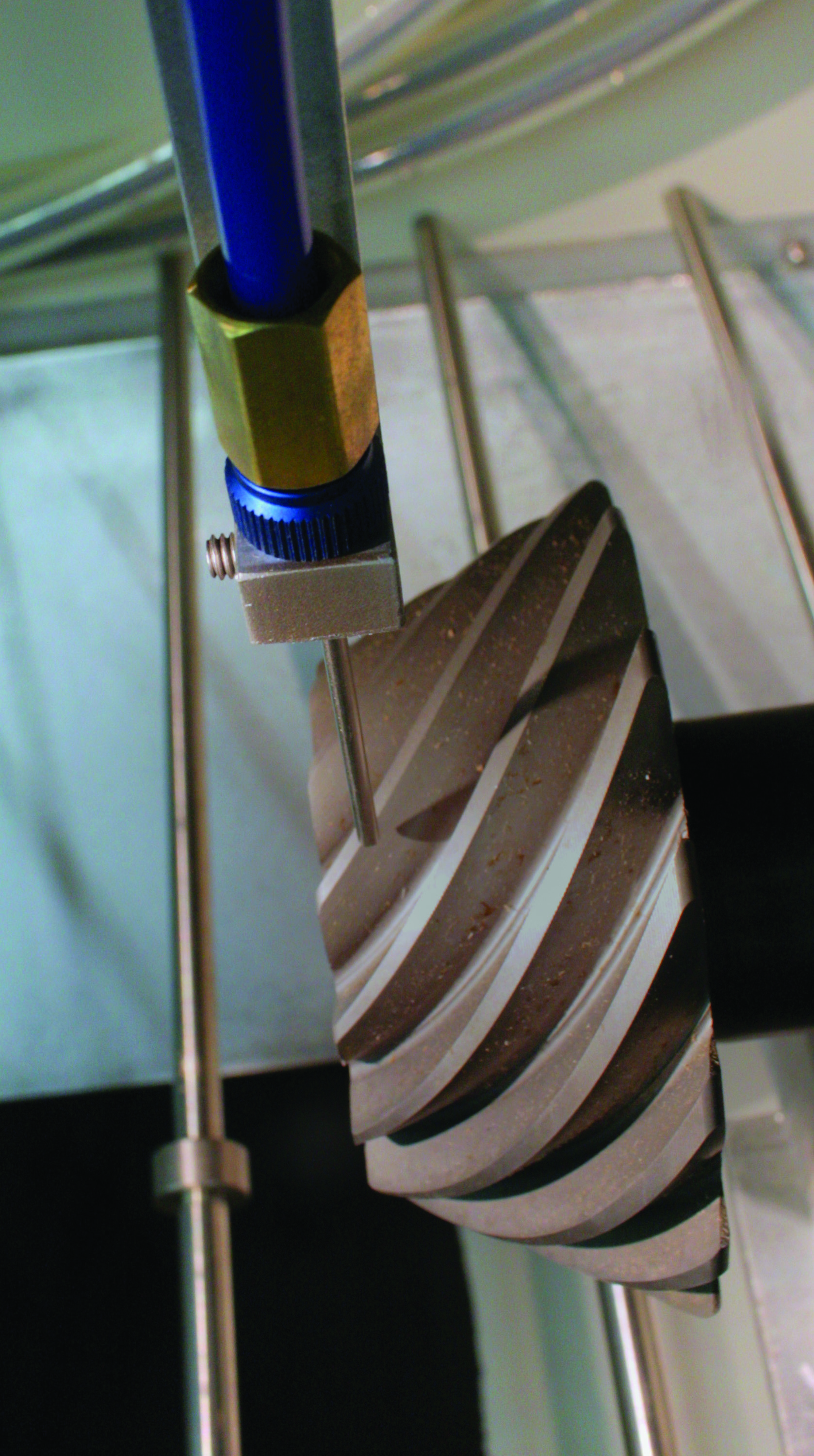 Precision shot peening equipment requires metering exact quantities of media and air, ensuring the tightest process control. It does this by positively introducing media into the air stream, as opposed to methods used by traditional shot peening equipment (gravity, syphon, or magnetic feed systems that have control limits). The system sorts and stores three different sizes of media to allow flexibility in changing between processes. For example: A gear can require peening with an S-70 in the root because of the size of the radius and an S-110 for the tooth. This can be processed in one step.

An integrated spiral separator is used to remove any “out of round” media. As media is used, it can crack or chip. If any shot breaks in half or chips instead of reducing in circumference in a balanced manner, it will scratch instead of peen. By integrating the separator, it ensures that the media being used to peen is spherical. An added benefit of more accurate abrasive delivery is the ability to hold tighter intensity tolerances.

Customized quick-connect tooling and nozzles are selected for the parts based on either bar code or part number. Once placed in the machine, the tooling is verified by the system’s integral computer. It uses RFID to ensure the proper tooling is in place and the correct media selection is made. Recipes and settings for each part are stored in the computer memory on the system with the peening parameters such as media type and pressure settings. As soon as each piece of tooling is in place, Almen Strips are run to develop a saturation curve and verify the peening process parameters. A saturation curve generator is stored in the system to make developing the saturation curve simple and convenient. Once the curve has been verified, the parts are placed in the tooling and the peening process begins. 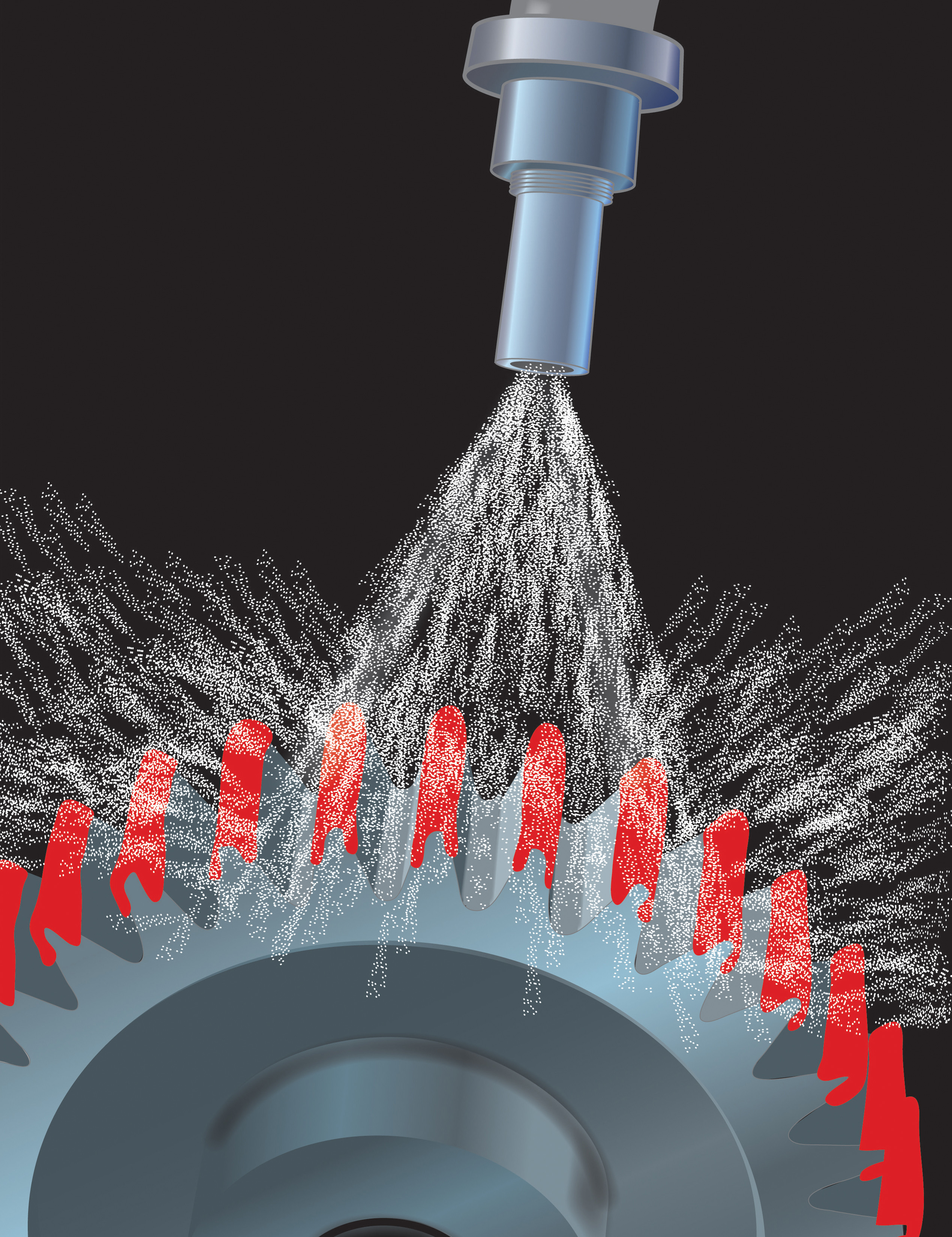 Peening a ring gear used in an automobile planetary gear system is an excellent example of a shot peening application. It usually has a rounded groove profile, and to make the gear last longer, the bottom of that valley needs to be peened because its teeth are pushed back and forth; eventually, they are going to fatigue and break off into the valley. Shot peening gives them better fatigue life. Other applications require peening of the gear valley only to preserve the smooth tooth face, which can reduce noise.

Spur gears are also very common type of gear. They generally have straight teeth and transmit motion and power between parallel shafts, although they are not usually used in automobiles due to noise. Spur gears are used in many devices and industries, including: Electronics, construction equipment, machine tools, conveyors, and material handling. Spur gears may be shot-peened for both the root and teeth, or just the root.

Helical gears have teeth that are set at an angle. Because of this design, they can be more difficult to peen adequately using standard, “wide blast” systems. Helical and spur gears are very similar, except that the teeth of a helical gear are cut at an angle to the axis or hole. These teeth typically engage more slowly and smoothly than spur and other types of gears used for similar applications, because the load is transferred uniformly and gradually. This results in superior performance and reduced noise and vibration. When used on parallel shafts, helical gears are similar to spur gears, but generally provide a stronger, smoother running gear train. When used on shafts at right angles, these helical gears are commonly known as spiral or crossed-axis helical gears.

Bevel gears are designed to connect with a gear mounted on an axis at practically any angle; most other style gears are generally used either parallel to each other, or at right angles. In most cases, a bevel gear is used at a 90-degree angle, although other angles may be used. Bevel gears are used in a number of industries and applications including automotive, aerospace, and transportation. Applications include any place where efficient transmission of power and motion between intersecting shafts is needed. These tend to be high-cost and require very thorough peening to eliminate potential stress fractures. Because of their design for end use, the precision peening allowed by focusing the blast greatly enhances the performance life of the gear assemblies.

All the gears types mentioned above are peened for one reason only: To increase fatigue strength — some require peening of the root only, some require all surfaces, some are root-and-teeth only. Each depends on the design of the gear, but when peening, all have the same issue: Masking is needed to protect the areas to remain un-peened, because some peening processes can distort the gear tooth face or alter the dimensions. By precisely directing the media stream and the pressure used, we eliminate the need for masking and prevent tooth distortion, thus eliminating labor and process time.