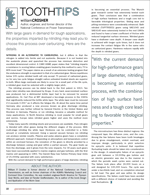 Nitriding is an alternative to carburizing, but it differs in that the nitrogen is added into ferrite and not austenite. Because it is not heated into the austenite phase and quenched the process has minimum distortion and excellent dimensional control. A 1980 ASME paper states that “nitriding imparts a resistance to scoring failure enabling gears treated by this method to carry 70 to 80% more load.” The paper claims as a result of an extensive testing program that the endurance strength is equivalent to that of a carburized gear. Stress repetitions below 105 cycles nitrided teeth will only accept 75 percent of carburized gears, so for very low cycle fatigue straight carbon unheated treated steels are superior to both. When large overloads are likely to occur for a small part of the life cycle, a nitrided gear must be selected with a slightly larger pitch.

The nitriding process can be dated back to the first patent in 1913. Ten years later nitralloy was developed by Krupp. A very hard, wear-resistant surface was produced, but a detrimental brittle layer had to be removed for several applications. Dr. Carl Floe at MIT developed a two-stage process in the 1940s that significantly reduced the brittle white layer. The white layer must be removed if it exceeds 0.001” as it affects the fatigue life. At about the same time period Germany also produced a new process known as glow discharge nitriding. This process was further refined by General Electric in the United States and Klockner in Germany. Plasma, or ion nitriding, became a valuable method for many applications. In North America nitriding is most popular for small gears and worms. Europe rates nitrided gears higher and uses the method more extensively.

Today many specific nitriding steels and processes are available. Pure nitrogen is blended with other gases during the different stages of the process. With multi-stage nitriding the white layer thickness can be controlled to a finite amount or completely removed. Using a special vacuum furnace ion nitriding can produce similar results. Plasma and pulse plasma gears have a completely different approach. Instead of depending on atmosphere and temperature control within an enclosed furnace, the ionization of the gears is directly provided by a discharge between casing and gear within a partial vacuum. The gear heats up from the discharge, and it glows from the ionic impacts. For 30 years such gears have been successfully applied to marine engines and gas turbines, with the first marine unit appearing in 1963. The Danish Navy Gas Turbine Primary Gear Units of 25,000Hp operated with every satisfaction.

With the current demand for high performance gears of large diameter, nitriding is becoming an essential process. The Munich gear research center has extensively tested such gears. Their conclusion was that a combination of high surface hardness and a tough core led to favorable tribological properties. Sliding wear and pitting resistance were considerably enhanced. Bath nitrided (TUFFTRIDED) gears using SAE1045 and SAE4140 were extensively tested in the mid 1960s and found to have a lower coefficient of friction with reduced tangential surface stresses. Nitrided gears have a shallower case depth. A deeper case depth is achieved with longer cycle times, but it does not increase the contact fatigue life in the same ratio as carburized gears. Hardness reduces rapidly with the depth in nitrided gears.

The microstructure has three distinct regions: the compound layer, the diffusion zone, and the core. Among the few failures have been tooth breakages due to gross misalignment, violent overload, and improper design, particularly in pitch selection for epicyclic units. It is believed that repetitive fluctuating loads should be taken into consideration in the design. A catastrophic failure of an epicyclic gear unit between a 16,500hp gas turbine and an electric generator was due to the manner in which the periodic wash cycles were carried out. The failure took place after 16,000 hours on a unit designed for 100,000 hours. The cycle was under a two-thirds load, and on completion returned to full load. The gear unit was within its design specifications. The failure could have been avoided with a different choice of material and avoiding the load fluctuations.