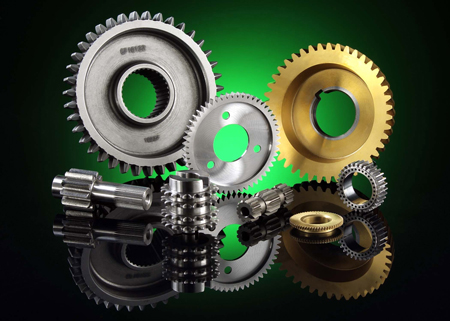 When Sovina learned that Forest City Gear was purchasing an IM Series automated inspection system from Keyence, she looked forward to the time it would save on incoming inspection of gear blanks from outside suppliers. Little did she know that the Keyence IM would soon become one of the busiest pieces of metrology equipment on the shop floor.

“Overall, the Instant Measurement [IM] has received a very favorable reception,” Sovina said. “It’s especially popular with the people in the turning department. They’re able to get accurate dimensional checks quickly, and it has reduced a lot of the hands-on work with height gages and micrometers. The more they use it, the more confident they are with the results.”

The IM has been used frequently with Forest City Gear’s receiving department where sample sizes can range from about 3 to 32 parts per order, reducing time due to its ability to check parts quickly.

“We use the IM on anything from simple gear blanks to more intricate shaft inspection, and we are able to measure several features on the part in seconds, thus reducing our overall inspection time,” Sovina said. “The IM has not completely taken the place of the optical comparator — we still use it for quite a bit of work throughout the shop — but it gives us another tool to verify our part geometry.” 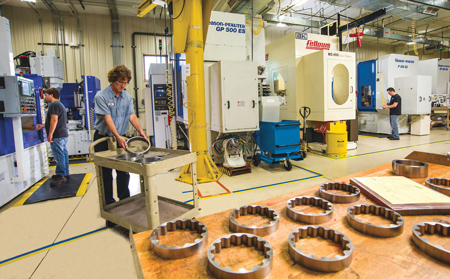 Forest City Gear sits a short distance from the Rock River in the heart of Roscoe, Illinois. The company has been in business for more than 60 years, machining high-quality gears for the aerospace, medical, transportation, and other industries that require hobbed, skived, and precision-ground geared components. This includes helical, spur, spline, and worm gears — some with tolerances to 10-millionths of an inch and diameters larger than a bicycle wheel.

“With those accuracy requirements, the company had to invest millions in gear form measurement and analysis equipment, but was looking for a quick and easy way to measure other part features,” said Forest City quality manager, Dennis Atchley.

That need arose with the recent contract from a robotics manufacturer that supplies pick-and-place machines for use in the warehouses of a major online consumer products reseller. 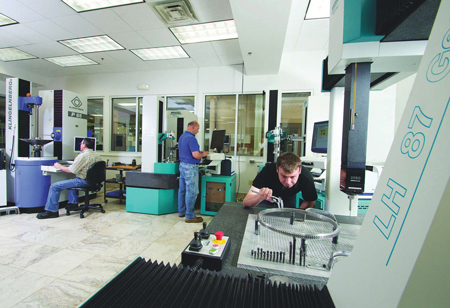 Atchley turned to Keyence for help. The IM Series Instant Measurement system measures multiple part features simultaneously without the need for positioning fixtures — simply place the workpiece on the measurement stage and press the measure button. Within three seconds, up to 99 part features and hundreds of points are identified and measured, and the results are automatically recorded. Lines, circles, and arcs are automatically recognized, and a special algorithm is applied to fit such features within a user-definable number of points. Chips, burrs, and debris are likewise filtered, improving accuracy and ease of use for the operator. Most importantly, the IM is accurate to within +/- 2 µm.

This was all good news for Atchley, who is especially pleased with the IM’s ability to calculate 6 sigma, CPK, and other statistical analyses and generate an inspection report at the push of a button.

For example, Forest City Gear had a job running where the customer was asking for a process capability study on a ground taper.

“We set it up so the operator could take in-process measurements of the gage line as the parts came off the machine,” Atchley said. “It’s been very useful for things like that, especially with our higher part volumes.” 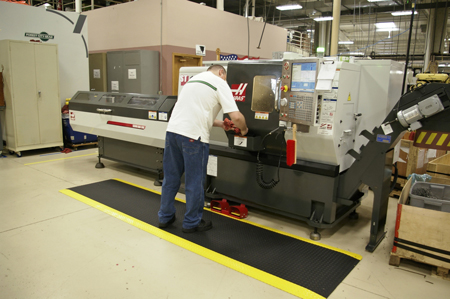 Another area where the IM has come in handy is statistical process control (SPC) of subcontracted operations. Atchley said one of the new part families is comprised of 16 different components and requires thousands of measurements per month. Having the ability to simultaneously check all the lengths on a gear shaft, for example, or multiple bearing journal diameters, has greatly increased throughput on receiving inspection and, at the same time, makes data capture and report generation much simpler.

“It gives us greater confidence in the subcontractor’s process control,” Atchley said.

As the one responsible for taking all those measurements, Sovina is quite happy with the IM’s speed and ease of use. 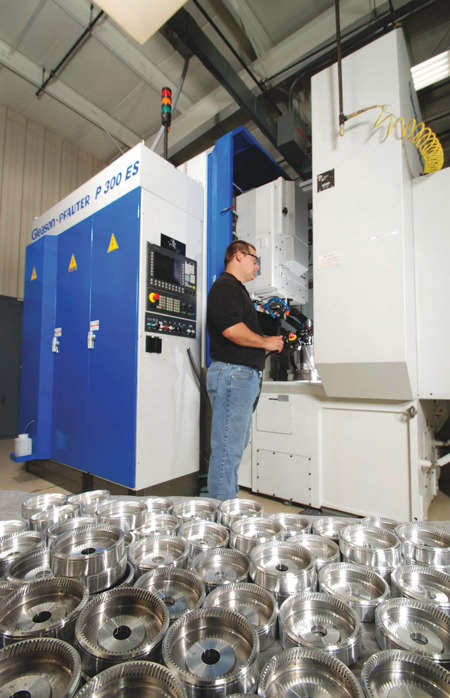 “After initial setup, we capture an image of the workpiece, and then it’s just a matter of drawing lines on the part edges and building the part program based on the drawing requirements,” Sovina said. “Once the part program is written, the operator then goes into the multi-measurement mode. From there, we can perform multiple part inspections and collect the results as we go.”

The IM also offers a batch inspection capability, where the operator can place multiple parts on the stage and measure all parts simultaneously. The IM offers two measuring modes — high precision for small, fine work and wide field mode to use on parts with a more open tolerance. Sovina’s team has offline programming capabilities with their IM, as well as two networked machines so they can run the same part program on either machine. 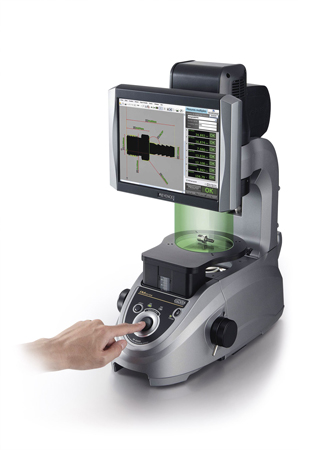 Sovina said that programming was easy to learn. It took no more than half a day with the Keyence representative for her and the team to become familiar with the system. As a result, she’s expanded the IM’s role beyond inspection of the parts coming in the receiving door.

“A few of our customers have increased their final inspection requirements from a one-piece layout to 100 percent of all features on all parts,” Sovina said. “Although we cannot measure every feature on the IM, the ones we can measure, we can now measure in seconds, thereby helping to reduce time at final inspection.”

Sovina also said that she can often use the same program for the subcontracted gear blank and final inspection of the workpiece.

“If some of the dimensions change during our in-house machining and gear cutting operations, the IM is still able to pick up the part features,” Sovina said. “Because I only have to program it once, it saves us a lot of time. Long term, the IM will be a big benefit to the company.”

At this time, Forest City Gear has two IMs in the shop — running programs and being used to assist in the checking of parts, which not only helps its inspection department, but also the in-process inspection. And it allows the operators to quickly and accurately inspect the parts being produced on the shop floor.

According to Sovina, the addition of the technology has helped Forest City Gear increase its efficiency and throughput of parts from receiving, in-process, and final inspection.

Lubrication and wear in forging