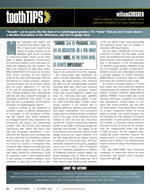 Many seminars and papers are conducted and written under the title of “gear noise” when the full subject is sound. Sounds can be pleasant, such as an orchestra or a fine–tuned engine. Noise, on the other hand, is always unpleasant. Sound waves are formed by millions of air molecules colliding and vibrating with one another. The waves are weakened as they travel, hence ANSI/AGMA 6025–C90 Sound for Enclosed Gear Drives specifies as the distance between the major vertical surface and the microphone for sound pressure measurements to be three feet for the lowest speed gear set center distances > 4,” five feet 4’–15,” and for centers above 15,” use 10 feet. Through analytical and experimental data we now have detailed knowledge on acoustical emissions from gears. It has also become a recognized non–destructive technique for analyzing gear defects.

Sound is defined as the variations in pressure, stress, or particle displacement of a medium, or the sensation of hearing that results from these variations. Accordingly, there are three elements to be considered: the source, the transmitting medium, and the receiver. Two personal experiences with rubber mill drives support this necessary clarification. I once observed two identical units standing side by side, and while one emanated a harmonious sound, the other was different and the cause for concern. It transpired that, during the final cutting of the main gear the machine broke down, and when the gear was finally finished no imperfection could be measured until it was revealed while it was running. In another example, every indication of gear unit noise was in fact found to be transferred from the coupling.

The sound waves have amplitude, frequency, velocity, wavelength, and waveform. Among the many factors that influence the wave are the housing design, location, mounting, gear type, tooth form, pressure angle, overlap ratios, accuracy, surface finish, load, speed, alignment, rigidity, and wear, etc. Reducing spur gear audibility can require an increased number of thinner teeth providing higher contact ratios. Torque transfer is not uniform due to spacing variations, profiles, tooth bending, and elastic deformation. The non–uniform torque and its multiples produce a dynamic force at the gear mesh influenced by the number of teeth and the rpm. This force excites the coupled torsional and vibratory modes of the shaft, continuing through the bearings and housing. The rigidity of the mesh and its errors intensify sound. In multistage reducers the major audibility is in the first stage, and as the angular velocity is reduced, so is the sound level. The internationally established frequency weighted curves are A, B, and C, with A being the norm for industrial applications. A number of weighting networks (filters) adjust the sound pressure level in order to approximate the response of the human ear. The A filter used for gear measures the response of the ear below 55dB. Gears generating low frequency sound have no problem in meeting a dBA specification.

The four major instruments for the measurement of sound are the basic sound meter, the weighted–level meter, the impulse meter, and the octave–band meter. The first, with a microphone, is not recommended for detailed sound studies. Weighted tests are the simplest. Impulse records short–duration sounds, and octave–band provides a general analysis of sound frequency. Mathematical corrections must be made when there are combined noise levels.

To conduct a through analysis of sound from a gear unit, both sound and vibration measurements are required. NASA uses a Robotic Acoustic Intensity Measurement System (RAIMS). Sound power and sound pressure have been compared to a heater and temperature. Sound power is constant, but sound pressure can vary with the environment. Thus sound power allows for a direct comparison. When the sound power is known, the sound pressure can be calculated at a set distance in a known environment. A semi–anechoic chamber is not needed to measure sound intensity. External sources of sound do not contaminate the measurement which will have a 1dB accuracy. On the negative side, measuring sound intensity requires the measurement of pressure and molecule velocity over a surface. The intensity probe must be held vertically to the measurement surface.

ISO and ANSI/AGMA have numerous standards on sound that should be used universally and quoted when measurements are taken.

When considering the gear mesh, backlash is high on the list of misunderstandings