A new method was developed to generate and simulate tool paths for conventional 5-axis machines to create helical gears with crowning following the generation principle.

To manufacture gears, special machine tools and corresponding processes such as hobbing, shaping, planing, profile milling, and broaching are usually needed. However, the huge investment in such gear machining is prohibitive for manufacturers, who only produce the gears in small batches on an annual basis. To overcome this economic problem in the manufacturing of gears, standard 5-axis CNC machines were proposed as an alternative tool for machining them, and a few approaches were presented to implement this gear-manufacturing method. However, machining helical gears with crowning or other modifications have been studied little. This article proposes an accurate method to manufacture helical gears with crowning modifications using a standard 5-axis CNC machine tool. As a gear-roughing process, milling using an end mill was selected where the tool movement follows the generation principle. By incorporating crowning modifications into the tool’s movement, an accurate tool path generation method, was developed. A CAM software written in C++ was developed to generate, visualize, and simulate the tool path for machining the gear according to user-defined parameters. The tool path was subsequently post-processed into NC code to run on a CNC machine. To validate the generated NC code, an internal helical gear with crowning modification was machined on a conventional 5-axis CNC machine. The machining results confirmed that the proposed method is feasible. The machined helical gears will be measured using optical and tactile CMMs to determine their deviation parameters.

Gears as a means of mechanical transmission play an essential role in vehicles, machine tools, wind-energy systems, and even toys. To manufacture the gears, special machine tools and processes, such as hobbing [1], shaping [2], planing [3], profile milling [4], and broaching [5], are usually needed. The common features of these machine tools are complex and expensive, and they are usually employed to manufacture large volumes of products. However, the investment in such gear machining is prohibitive for manufacturers, who only produce the gears in small batches on an annual basis.

To overcome this economic problem in manufacturing the gears, some researchers investigated the possibility of using the standard multi-axis CNC machine as an alternative tool. Suh et al. [6] proposed a method to produce spiral bevel gears on a 3-axis CNC machine with a rotary table. The rotary table was programmed to move simultaneously with the three linear axes. Later, Suh et al. [7] modeled the surface geometry of spiral bevel gears with crowning, and the method for machining crown gears by a 4-axis CNC machine was also implemented. Özel [8] proposed an approach for machining spur gears by using an end mill in the 3-axis vertical CNC milling machine instead of any auxiliary apparatus, special machine tools, or special cutters. In this method, the end mill cuts the workpiece in the layers of the XY planes of the spur gear along the face width of the teeth. Recently, Teixeira Alves et al. [9] presented the analytical surfaces of the spiral bevel gear and machined the gear on a 5-axis CNC machine. However, the accuracy of the proposed methods was rarely studied in detail. Özel [10] analyzed the cutting errors in the tooth profile of the spur gear manufactured in the CNC milling machine based on the technique proposed in [9]. One prominent limitation of machine programming language, which controls the motion of machine axes and is employed in most of the modern CNC machines, is that the software must segment the curve into a finite number of linear or circular segments to profile cut a contour. Thus, the tool paths for cutting the gear flank were generated from linear segments, connected by the points sampled from the involute equations that define the surface of the left and right flank, separately. The machine tool moves linearly along the linear segments when machining the gear flanks. Form errors were introduced to the involute profile of the tooth in this case.

To improve the accuracy of machining gears on the universal 5-axis CNC machine, Groover [11] proposed an approach for machining cylindrical involute gears based on the generation principle. In this method, the end mill travels along a straight line while the rotary axes rotate simultaneously with the end mill. The rotational speed of the rotary table and linear speed of the end mill was kept as constant in the machining the gear flanks. Based on this principle, the cutting error involved in the previous methods by using linear segments to approximate the involute tooth profile was eliminated. The proposed method for machining external and internal spur and helical gears was validated by machining experiments. The results show the form deviations of the gear flanks were less than 5 µm. However, flank modifications were not researched in his thesis.

Flank modifications are usually introduced to the gear flanks by intention to improve the meshing properties of gear pairs under all load conditions. Crowning is a common type of flank modification. A cylindrical gear with crowning modification has several advantages over a standard gear, such as reduced noise, longer lifetime, coherent contact pattern, and an advantageous stress distribution on the tooth surface [7]. In this paper, Groover’s method for machining cylindrical involute gears on the standard 5-axis machines was extended to produce helical gears with crowning modification.

The parametric equation of a circle, described as a vector of ξ, is the following:

rb is the base radius.

Taking the derivative and multiplying by – ξ gives the following result:

Lastly, adding the vectors λ1(ξ) and λ2(ξ) gives the parametric form of the involute of a gear shown in Equation 3:

λ(ξ) is used as the basis for describing helical gear flanks. A gear’s tooth flank surface with a helix angle β equal to zero is defined in Equation 4:

A rotational matrix can be represented as:

Then, an involute λ(ξ,θ) with an angular offset of θ is defined as:

Since the angular offset varies linearly in the z direction, then Λ can be defined as function of z in the following form.

rp is the pitch radius of the gear.

The helix angle varies with radius from the origin as shown in Equation 8.

The flank-surface equation p(ξ,z) for a helical gear can be defined in the following form

To properly position the tool in space following the generation principle, the surface normal n(ξ,z) and the transverse direction t(ξ,z), defined by the intersection between the involute surface and a plane tangent to the base cylinder are derived as shown in Equation 10 and Equation 11, respectively.

∆s = smin – smax, where smin and smax are defined by ξmin and ξmax  respectively.

Lastly, the amount of profile crowning, Cα, defines the material removal depth at ξmin and ξmax.

The second modification is the tool orientation tc(ξ,z) as a function of z, defined as rotational deviation from t(ξ,z) about direction vˆ(ξ,z) and contact point o(ξ,z). Rotational axis vˆ(ξ,z) is orthogonal with respect to n(ξ,z) and t(ξ,z) as shown in Equation 15 and Equation 16, respectively.

The final commanded position qc(ξ,z) would then be written as shown in Equation 18.

Based on the equations derived in the methodology section, a computer aided manufacturing (CAM) software written in C++ was developed to generate the roughing and finishing tool paths. A screenshot of the software is shown in Figure 2. The software creates tool paths from gear generalized geometry parameters pitch radius, pressure angle, face width, helix angle, and the number of teeth. The tool geometry section in the software is used to define rt in Equation 12 and to calculate the speeds and feeds. Variables Cα and Cβ can be changed to vary the crowning shape. A simulation module, shown in Figure 3, was also developed to visualize and simulate the generated tool path by using a C++ library called a visualization toolkit (VTK) [12] as the graphics backend.

Using the surface normal and tool orientation during engagement between the tool and the gear’s flank- surfaces based on Equation 11, linear interpolation between the right-flank and left-flank paths are generated to create the roughing paths. The roughing paths are shown in Figure 4. To use the full length of the cutter’s flutes, a less than 15% radial immersion is kept throughout the roughing path to avoid chatter and extend the life of the tool.

Paths that intersect the gear’s surface are deleted from the path array. Figure 5a shows a screenshot of the finishing paths. The internal gears surface is shown in ocean blue, the addendum and dedendum circles are shown in the blue inner circle and blue outer circle, respectively; the base circle is shown in red, and the pitch circle is in black. The orange trajectories show the engagement sections between the cutter and the gear’s surface. A more detailed depiction of the tool engagement can be seen in Figure 5b and Figure 5c.

The right flank’s path has an extra sweep-and-twist move that removes material at the tooth tip to follow the generations principal along the tooth tip region. The motion can be seen more clearly in Figure 5b. The left-flank’s finishing path is not fully machined during the first operation as seen in Figure 5c; this is because as the tool approaches the tooth-tip region, the tool intersects the right flank before the tool is able to finish the left-clank surface using the generation principal. Once the first operation is finished, the gear is flipped over, and right-flank’s finished pass is repeated to finished cutting the region that is not reached by the first operation.

A new method was developed in this article to generate and simulate tool paths for conventional 5-axis machines to create helical gears with crowning following the generation principle. Preliminary simulation results show the capability of the software to accomplish the task of generating the corresponding roughing and finishing tooth paths. An internal gear with crowning modification was machined to validate the proposed method. The machining result confirmed that the proposed method is feasible. In future work, tactile and optical measurements are planned to identify conventional and areal gear deviation parameters. 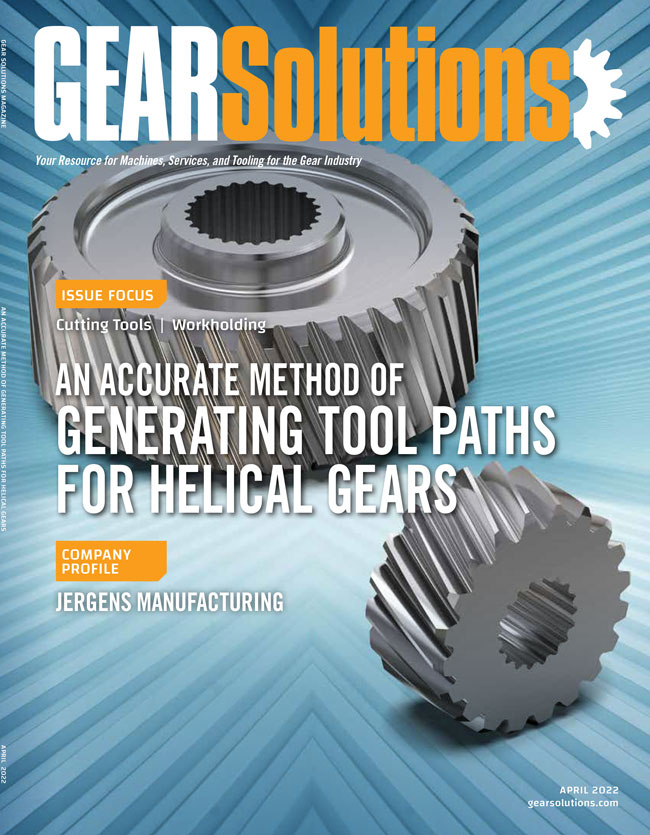 The ABCs of CBN Grinding