Vast empirical knowledge accumulated over centuries, in conjunction with recent advances in the areas of material science, tribology, and big data analysis, have allowed significant progress in gear design. Still, gears sometimes fail. Gear tooth flanks are most vulnerable to damage under tribological stress. Gear material, machining, and finishing methods, lubricant, and end use are all important factors both for the early life running-in behavior as well as lifelong performance.

Tribolayers formed on tooth flanks due to interaction with common EP/AW additives, such as sulfurized olefins, are known to be important for ensuring adequate surface integrity during gear operation, especially when gear sets start or stop, invoking boundary lubrication. Scoring and pitting are two common lubricant-related failures, which can be remedied by proper additive selection. Unfortunately, as performance requirements are being constantly pushed to the edge, this increases user dependency on specific lubricant types with tight specifications. Nitriding is another efficient way to increase wear and scuffing resistance of gears, thus minimizing dependence on the lubricant’s properties. Nitrided gears are common in performance-critical applications such as motor racing.

Nitriding is a heat-treating process that diffuses nitrogen into the surface of a metal to create a case hardened surface. Nitriding is most commonly used on low-carbon, low-alloy steels. In recent years, however, higher-alloyed steels have also been nitrided, with advantageous results.

The primary nitriding methods used today are gas nitriding, salt bath nitriding, and plasma nitriding, which are named after the medium used to donate nitrogen.

We should also mention nitrocarburizing, which is a shallow-case variation of the gas nitriding process. Nitrocarburizing involves thermochemical diffusion of nitrogen, carbon, and to a very small degree, oxygen atoms into the surface of the steel part to form a compound layer at the surface and a diffusion layer underneath. Nitrocarburizing is typically performed at temperatures of 550-580° C for 0.5 to 5 hours. Therefore, the method is considered as a fast method compared to regular nitriding. The surface hardness that can be achieved after nitrocarburizing ranges from 350-1,200 HV and depends on the type of material and process parameters that are used [2].

Nitriding imparts a high surface hardness that improves resistance to wear, scuffing, galling, and seizure. Fatigue strength is increased mainly by the development of surface compressive stresses. Nitriding also increases the resistance of the steel against hardness loss and plastic deformation under load at elevated temperatures.

Nitriding is typically performed at temperatures between 500° to 550° C, and is therefore followed by a cooling or quenching step in which the steel product is cooled down. Quenching oils are designed for rapid and better controlled cooling. Fast quenching after nitriding will increase the solution hardening effect from the entrapped nitrogen, but this effect is proportionally small compared to the precipitation hardening effect due to hard nitrides formed from alloying elements and nitrogen in the steel surface. Alloying elements such as Cr, Al, V, Ti, and Mo form hard nitrides in steel during nitriding, and the level of such alloying elements in the steel has a huge impact on the nitriding result in terms of hardness, wear resistance and fatigue strength.

Nitrided gears are used in performance-critical applications when maximum component endurance is required. Nitrided gears can be found in the drivetrain of trucks and racing cars and in rotary gear pumps, as well as in special purpose gear units for the energy, petroleum, chemical, and gas industries. Nitrided gears exhibit higher resistance to bending and rolling fatigue, which can be attributed to the existence of compressive stresses within the diffusion zone. Also, they show little wear up to a certain critical load, at which surface failure occurs, but tend to crush badly and suffer severe pitting when this load is exceeded [3].

TriboNite belongs to the category of thermal-processing and coating (TP&C) processes jointly developed by ANS and Bodycote. TriboNite process uses a reactive quench oil concept whereby a solid lubricant layer is created at the surface of nitrided parts during the quenching step. This allows further reduction in friction and wear, better resistance to high shock loads, improved scuffing resistance, and improved corrosion protection of treated parts.

Figure 2 shows cross sections of the surface layer of TriboNite-treated components. The components have been nitrocarburized at 580° C for 1.5 hours. The compound layer — marked by red bars — and, to some extent, the diffusion layer can be distinguished in the images. The bright layer at the top of each image is an aluminum foil that is used to protect the surface under the sample preparation. The black layer between the foil and the compound layer is the solid lubricant coating and iron oxide combined.

Figure 3 shows the results of compositional in-depth profiling of the surface layer by AES. As one can see, the solid lubricant is localized within the 1 micron thick topmost layer.

ii. FZG back-to-back gear test. The standard FZG test A/8,3/90 is widely used for the evaluation of the scuffing properties of industrial gear oils. Automotive gear oils of GL-4 level can be tested in the step test A10/16.6R/90, axle oils of GL-5 level in the shock test S-A10/16.6R/90 [4], and usually will show no scuffing in the standard test. For the purpose of the present study, the standard test has been adapted to evaluate the effect on the scuffing properties of gear surface treatment instead of the EP/AW performance of the oil. For that purpose, a few standard “A” type gear sets were treated by using the TriboNite process, still a few gear sets were isotropically finished to Ra ca 0.03 um, and still a few were used “as they are” to serve as a natural reference. It should be noted that nitriding of carburized parts is not a practically meaningful application scenario, and it was used for research purposes only. One extra measurement (marked “TP&C1/2”) was also carried out where a TriboNite treated 24-teeth gear was put in contact with a standard carburized 16-teeth pinion. All the aforesaid types of gear sets were tested for the scuffing performance in a fully formulated SAE 75W-90 API GL-5 gear oil and a viscosity matched additive free oil. The results are presented in Figure 5.

When the additive free oil is used, both isotropically finished and reference gear sets reveal scuffing quite early, already at A/8.3/90 load stages 4 to 6. However, with the fully formulated API GL-5 oil, no scuffing occurs even at the highest load stage 12. The gear sets featuring the TriboNite™ treatment showed no scuffing no matter which oil was used, see Figure 5. 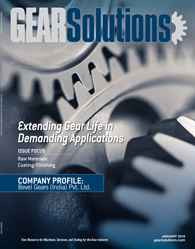