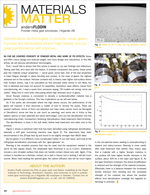 So far we covered porosity of powder metal and some of its effects: Noise and NVH, macro design and reduced weight, and micro design and robustness. In this fifth article, we will discuss densification technologies.

First, I would like to stress that this article is based on my own findings and reflections. Having said that, let’s start with the basics. A sintered component has pores; these pores give the material unique properties — some good, some bad. One of the bad properties is lower fatigue strength in plane bending and contact. In the case of gears, the highest stresses are on the surface. Hertzian contacts will, in theory, have higher sub-surface stress than surface stress, may it be calculated as first principal shear stress or von Mise, but that is idealized and does not account for asperities, lubrication, wear effects, traces from manufacturing, etc. I read a quote from someone saying, “All models are wrong; some are useful.” Keep this in mind when discussing where high stresses occur in gears.

So if the pores are eliminated where the high stress occurs, the performance of the gears will improve. It then becomes a matter of how to remove the pores. There are several methods. Some of them are patented and have trade names (such as Densgrad or Densiform), some are free to use (such as peening), and some are in limbo (a few players seems to have patented the same technology). Let’s put the densification into the manufacturing chain: Compaction—Sintering—Densification—Heat treatment—Hard finishing.

The densification is done in the soft state, before heat treatment, and adds cost to the process.

Figure 1 shows a cylindrical roller that has been densified using rolling-type densification, basically a stiff gear burnishing machine (see Figure 2). The specimens have been benchmarked in the ZF-type test rig and found to be slightly stronger than 8620 steel.

But for gears, it is a different, more complicated matter. In our next issue, we’ll look at the rolling-type densification processes with the “gear glasses” on.

Peening is the simplest process that may be used, and the equipment needed is the same as with regular steels. The obtainable layer thickness is up to 0.2mm. Drawbacks include a very dimpled surface that does not handle contact stress very well. Again, if the contact is handled as a Hertzian contact, all is well in theory, but in testing it will fail much sooner. When heat treating the peened gear, the carbon diffusion rate will be much higher in the non-peened areas, leading to overcarburizing in topland and sides/corners. Peening is more useful after heat treatment than before. Also, theory says that a material with a higher Young’s modulus in the surface will have higher tensile stresses in the surface, about 30% for a thin layer (see Figure 3). As the layer thickness increases, the stress amplification is reduced and the strength of the material increases. Effectively, there is a balance between the increased tensile stresses from bending and the increased strength of the material, but where the positive effects from densification outweigh the negative (in bending) is unknown.